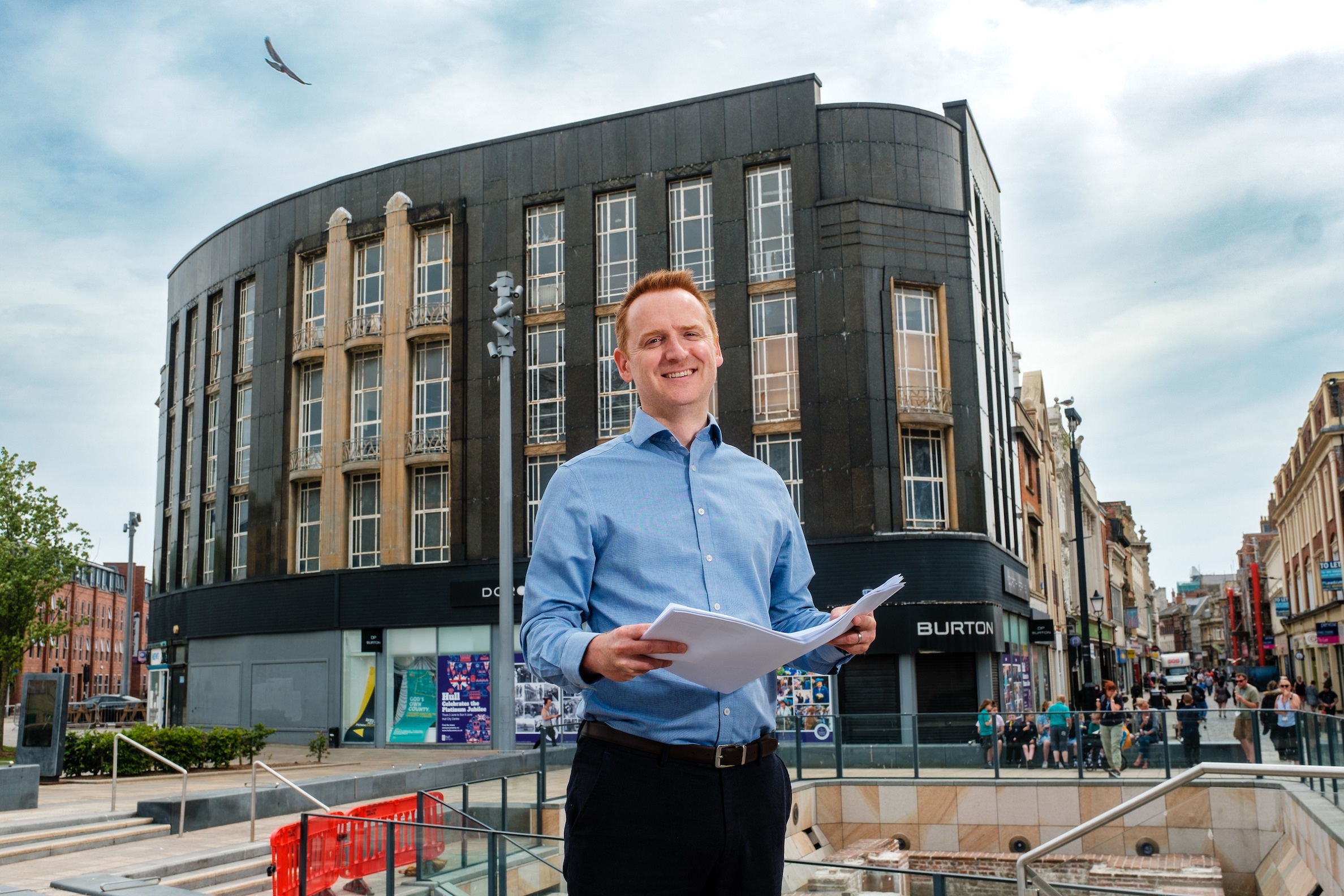 Leading developer Wykeland Group has unveiled plans to bring the landmark former Burton building in the heart of Hull back to life.

The building, on the corner of Whitefriargate, close to Queen Victoria Square, has been vacant since the fashion store closed its doors after owner Arcadia went into administration in 2020.

It was purpose-built as a fashionable men’s tailor shop in 1936 for company founder Montague Burton and, with its striking art deco facade, the building is one of the most distinctive in the city centre.

Having acquired the Grade II listed building, Hull-based Wykeland has now announced plans to conserve and regenerate the building.

Wykeland has submitted a planning application to Hull City Council for the extensive repair, refurbishment and conversion of the building to create a prime retail or restaurant space on the ground floor, with offices on the upper floors.

The imposing building features polished granite cladding, full height windows to the upper floors and decorative columns and balconies. However, it has fallen into disrepair over time, with the building’s fabric in poor condition, internally and externally.

A number of cladding panels are defective, including cracks that have allowed water penetration into the building.

The steel-framed, single-glazed windows are in poor condition, with corrosion and distortion to many of the frames and damaged glazing. The internal plasterwork is also damaged, with brickwork exposed in many places.

The plans put forward by Wykeland include complete replacement of the cracked and worn cladding. The project would also involve replacement of all the windows with new metal-framed, double glazed units and creation of a new entrance facing Whitefriargate based on the design of the original Burton shopfront.

The building also has an internal art deco-style metal cage lift, which is being refurbished and brought back into use, while the plans also include recreating a parapet at roof level with the Burton name, which was once a key feature of the building.

“We plan to deliver a sympathetic regeneration of the building, saving a landmark, listed building from dereliction and bringing an important commercial space in a prominent city centre location back into use.

“We have invested significantly in Hull city centre over many years, including in Whitefriargate, and the acquisition and proposed reinvigoration of the Burton building underlines our commitment to the heart of the city.”

The building has four floors, plus a basement, with a total of 11,000 sq ft of space. The proposed retail or restaurant area on the ground floor will offer 2,000 sq ft of floorspace, with the first, second and third floors each covering 2,600 sq ft.

Jonathan Stubbs, development director at Wykeland, said: “We identified the significant potential this building offers and were pleased to secure it following the collapse of Arcadia. These plans will enable the building to have a long-term, commercially viable future.

“Once redeveloped, this will be a fantastic opportunity for businesses to move into a landmark building in a prime location in the heart of Hull.

“That potential has been reflected in interest we have already received in the building as we have developed our plans to bring it back into use.”

Wykeland is a major player in the regeneration of Hull, including through its work with housebuilder Beal Homes in the Wykeland Beal joint venture delivering the £80m rejuvenation of the Fruit Market, in partnership with Hull City Council. The developer has an outstanding track record of conserving and revitalising buildings of historic and heritage importance.

In recent years, Wykeland has also completed a series of property acquisitions in Whitefriargate, with previous deals including the former Marks & Spencer and New Look store buildings.

Wykeland purchased the former Burton building from the administrators of high street retail group Arcadia, which owned Burton, Dorothy Perkin, Wallis and other fashion brands before it collapsed in 2020.

The building’s distinctive art-deco style was designed by Burton chief architect Henry Wilson. It followed the “house style” at the time for Burton buildings which were designed to reflect fashion and glamour, with the granite cladding creating a sleek, modern appearance.

While always being home to a Burton store until its closure, the building’s upper floors have had a number of uses over the past 80-plus years, including as a billiard hall and being occupied by Hull’s customs office for many years.