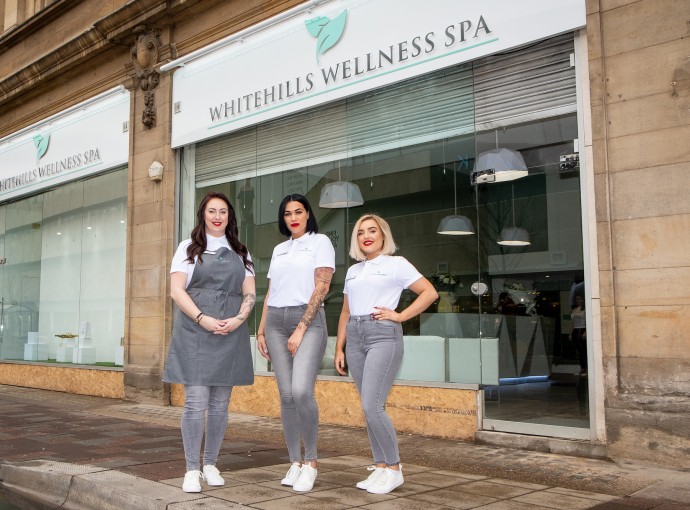 A
former Royal Navy dental therapist who opened her own clinic less than three
years ago has now added a dedicated wellness spa after ignoring warnings of a “logistical
nightmare”.

Amy Northen-Hills called on the renovation expertise of her husband and her dad to keep costs under control for the transformation of the former Colour Lounge salon in Carr Lane, Hull.

She only took the keys on December 10, 2018 and, as bookings flooded in, set a deadline of Valentine’s Day for the grand opening. They made it – by the skin of their teeth!

Amy
said: “I used to come here every fortnight when it was Colour Lounge and I told
them they should have a steam room and a jacuzzi. They said it would be a logistical
nightmare – and now I know they were right!”

Amy,
who grew up in East Hull, worked in dentistry in the Royal Navy and then in
private practice, all the time saving to set up her own business. She opened Whitehills
Dental Clinic in Beverley Road, Hull, in June 2015 and a year later moved to Newland
Avenue after taking over a former hair salon to provide twice as much treatment
space.

During
summer 2018 Whitehills knocked through into the adjacent premises to add skin
and aesthetic treatments. An opportunity to expand into Hull city centre came
when Colour Lounge closed during 2018 but Amy wasn’t tempted until she made a
trip to organise her wedding last year at Rudding Park, near Harrogate.

She
said: “I walked round Rudding Park and told my mum on the way back that I wanted
to open a spa and wellness centre. We called the agents for this building on a
Wednesday in the middle of November, came in for a viewing on the Thursday and
signed on the Friday.”

The
new centre sits underneath Hull City Hall, which dates back to the first decade
of the 20th century. The first floor is fitted out as a state-of-the-art
hair salon, which is a brand-new venture for Whitehills. The basement houses
treatment rooms, a jacuzzi, changing rooms and a relaxation area and the ground
floor accommodates the reception and a lounge where guests can book in for
afternoon tea with prosecco.

Amy
said: “When we moved in some of the spaces were really tight with very low
ceilings so we ripped everything out and started from scratch. Thanks to my husband
and my dad we managed to keep the costs under £200,000. Without them it would have
been more like £500,000.”

The
investment has created eight new jobs, taking the total across both clinics to
nearly 20. Future expansion plans are on hold, just as they were when Amy
opened the clinic on Newland Avenue.

She
said: “Back in 2016 the plan was to consolidate and then look at opening another
dental clinic in one of the villages around Hull. That could still be the next
move but for now we’ll focus on this site and Newland Avenue.

“We’ve
generated a lot of interest during the two months working on the building and
we put a lot of pressure on ourselves by selling £1,500 worth of vouchers
during December. Clients from Newland Avenue are also eager to come here. They
hadn’t seen what we were planning to do but because they are familiar with our
work, they had an idea of what sort of standards to expect.

“The
result of that has been another 2,000 Facebook followers and a lot of bookings during
our first six weeks.”

Kathryn
Shillito, HullBID Executive Director, said: “The transformation of the building
is stunning and the business is a welcome addition to the growing ranks of high-quality,
independent operators in Hull city centre.

“Whitehills
Wellness Spa is unique in the Hull area for its combination of treatments and
therapies and hopefully it will become established very quickly as a
destination business, attracting more people into the city centre to find out
what else we have to offer.”