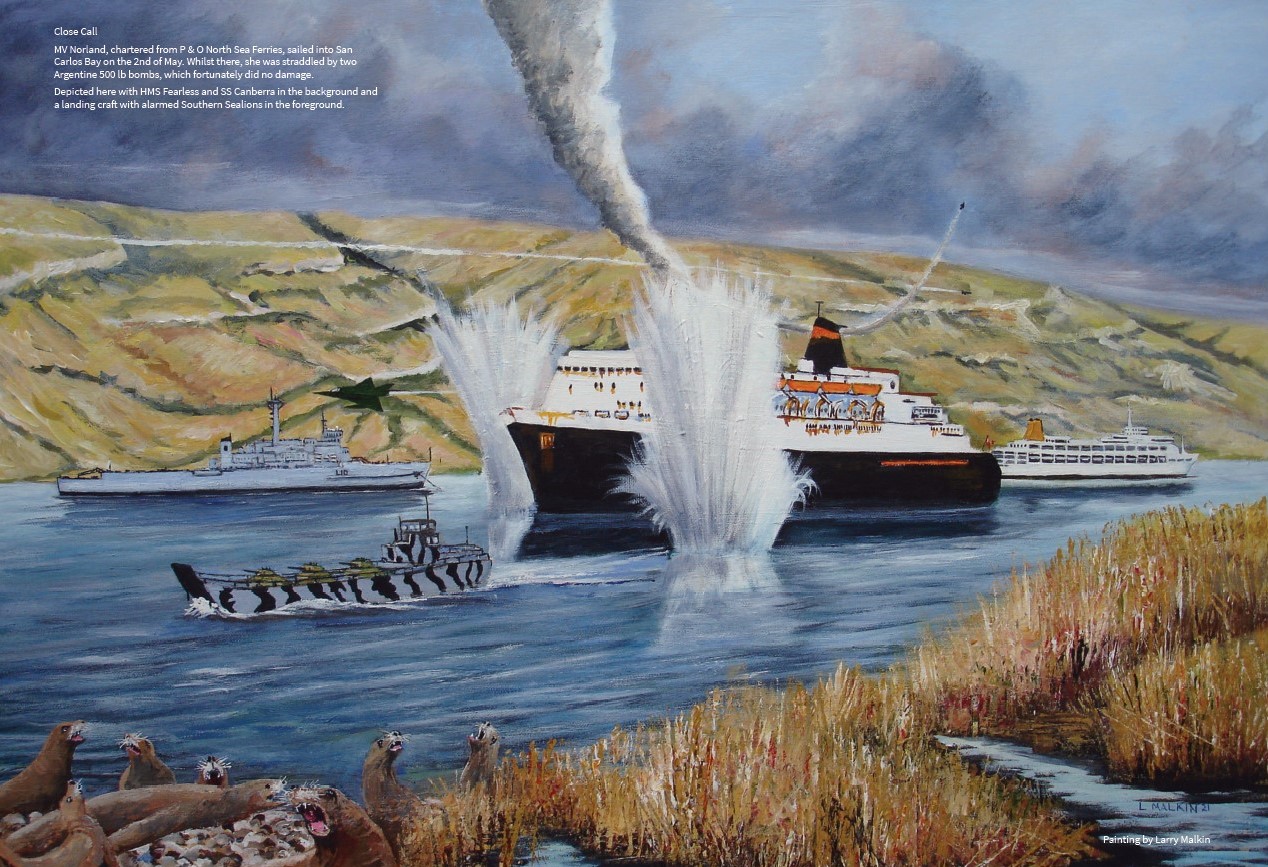 Trustees behind a drive to bring the world’s oldest remaining steam trawler back to its home in Hull are commemorating another episode in the city’s proud nautical heritage as part of their campaign.

The Viola Trust has commissioned Hull Task Force, a 2022 calendar that features paintings by Holderness-based artist Larry Malkin of the nine ships from the city which set sail for the Falklands War almost 40 years ago.

Businesses around the city have supported the project with all profits from the sale of the calendars going to support the Viola campaign.

Norman Court, project manager of the Viola Trust, said: “Our previous calendar for 2020 proved very popular with its collection of stunning paintings by Larry of ships with strong Hull connections, from the Norland and the Arctic Corsair to HMS Bounty and the Viola herself. Many people still have their copies.

“We wanted something really special to follow that and came up with the idea of marking the 40th anniversary of the Falklands War with a selection of paintings recognising the efforts of the city of Hull in sending nine ships and crews to the conflict in the spring of 1982.

“The Hull fleet fulfilled various vital roles including transporting troops, salvaging wrecks, removing mines and repatriating prisoners of war. The calendar contains dramatic paintings of the ships at work in hostile conditions, with details of their specifications and their individual histories.

“What many people forget is that the Viola was already there – having already seen action in the North Sea during the First World War she was sitting on a beach in Grytviken in 1982 when she was targeted by Argentine scrap metal merchants in one of the acts which triggered the Falklands War.”

Larry, who works from his studio at home in Welwick, was inspired to create the first Viola calendar after being commissioned to paint a picture of the Norland for the cover of a book. He embarked on Hull Task Force after chatting to trustees about the part played by ships from Hull in the Falklands.

He said: “There’s no doubt that when the 40th anniversary of the Falklands War comes round in a few months it will bring back a lot of memories, especially for people from our area who sailed there.

“A calendar is the ideal way to remind people of what happened and of the significant part played by the ships and crews from Hull. We hope it will also raise awareness of the history of the Viola and the campaign to bring her home.”

Norman added: “In common with so many other projects worldwide the project to return the Viola has been hit by delays during the last two years, with rising costs and restrictions on international travel presenting particular challenges.

“But we continue to communicate closely with the Government of South Georgia and South Sandwich Islands, we have received positive updates about the condition of the Viola and we are pressing on with fundraising initiatives including the new calendar and plans for another Viola product from Hotham’s Spirits.”

Hotham’s is one of the sponsors of the calendar and is selling it from the gin school, which relocated during the summer to 55 Whitefriargate, and from Bar 55 which opened in October in the same building.

Bar 55 is aimed a mature clientele with an offer of high quality spirits including Hotham’s own products, wines, cocktails, bottled beers and local draught beers. The food menu is a tantalising array of small plates all available Thursday to Sunday with private bookings also available and a number of corporate events already booked.

Emma Kinton, co-founder of Hotham’s, said: “The calendar is ideal as a corporate gift and we’ve got a lot of business bookings for the gin school and Bar 55 so we hope they will support the Viola campaign.

“We’re also looking forward to working with the Viola Trust on a new seafaring drinks product. We made two editions of Viola gin – one of which was sent to the governor of the Falklands – and we still have a couple of bottles. We are in discussions now about a new Viola product for early 2022.”

Also on board is B Cooke & Son Ltd, which has been part of Hull’s maritime history and Hull’s one-stop-shop for all nautical needs since 1863 as the only business in the city supplying navigational charts and publications, manufacturing and adjusting magnetic compasses and supplying and repairing sextants.

Managing Director Priyanka Perera said: “Because of our expertise and long involvement in the city’s maritime history it makes sense for us to support this project – we have records of our work dating back to the beginning of the 20th century. I’m sure we will have supplied many of the ships which are featured in the calendar and currently supply and service most of the other sponsors.

The calendar is priced at £10 with all profits going to the Viola Trust, and available from B Cooke & Son in 58-59 Market Place, Hull, J E Books in Hepworth’s Arcade, the Hull People’s Memorial in Whitefriargate, and will soon be available from the Holderness Gazette in Withernsea. To order a copy direct please email info@violatrawler.net