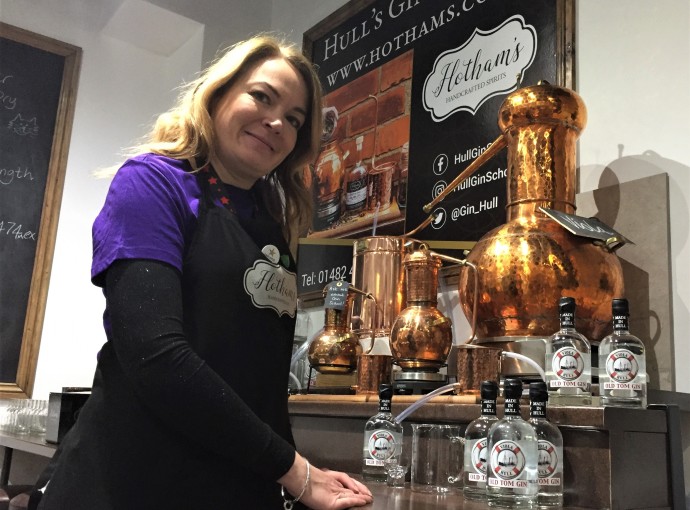 The Viola Trust will again partner with Hotham’s Distillery to showcase the Viola gin, created by the distillery in Hepworth Arcade, at the event at 1884 Wine & Tapas Bar on Wednesday, July 17.
The special price of £40 will include a tapas dinner – with gin in some of the dishes –and a glass of the Viola gin. Guests will hear from Emma Kinton and Simon Pownall of Hotham’s about how their various types of gin are made. They will sell Viola gin on the night.
Diners will also hear from Dr Robb Robinson, a maritime historian and a Viola trustee, about the history of the vessel. In addition, representatives of Hull City Council will give an update on plans for the Yorkshire’s Maritime City development.
Larry Malkin, a maritime artist who is currently working on a calendar featuring the Viola and other ships closely linked to Hull’s nautical heritage, will paint during the evening.
A previous dinner held to launch the event featured Alan Johnson, patron of the Viola Trust, and attracted a full house to the restaurant. Places for the follow-up event are selling quickly among individuals and some of the region’s prominent businesses.
Deborah Spicer, director of 1884 Wine & Tapas Bar, said: “The first event was fascinating and great fun. We know all about how good Hotham’s are because they make gin for us, and Robb Robinson has a treasure trove of stories.
“The Viola Trust decided to hold another event because a lot of people couldn’t make it to the first one and because there is so much more to tell. We’re really looking forward to it and we’re hoping for another full house.”
The Viola was built in Beverley in 1906 and operated as part of the Hellyer fleet of boxing trawlers. She was requisitioned to defend the UK in the Great War and left Hull for the last time in 1918 on a career which took her to Norway, Africa and Argentina, catching fish, hunting whales and elephant seals and supporting expeditions in the South Atlantic.
Her stories are of Hull men sailing to the most distant areas of the North Sea and working in perilous conditions for weeks on end, transferring their catches by rowing boat to fast steam cutters which fed the nation’s growing appetite for fish and chips.
When the First World War broke out, Viola and her Hull crew were on the front line of the maritime conflict, steaming thousands of miles on patrol across seas infested with mines and U-boats. Viola had numerous encounters with the enemy, being involved in the sinking of two submarines. More than 3,000 fishing vessels and their crews saw active service during the Great War and today Viola is one of a handful of survivors.
In the 1970s, Viola was mothballed after the closure of the whaling station at Grytviken, South Georgia. Sitting on the beach, where she remains, the old trawler was the target in 1982 of scrap metal merchants from Argentina. But when they landed they ran up the Argentine flag, an action which led to the Falklands War.