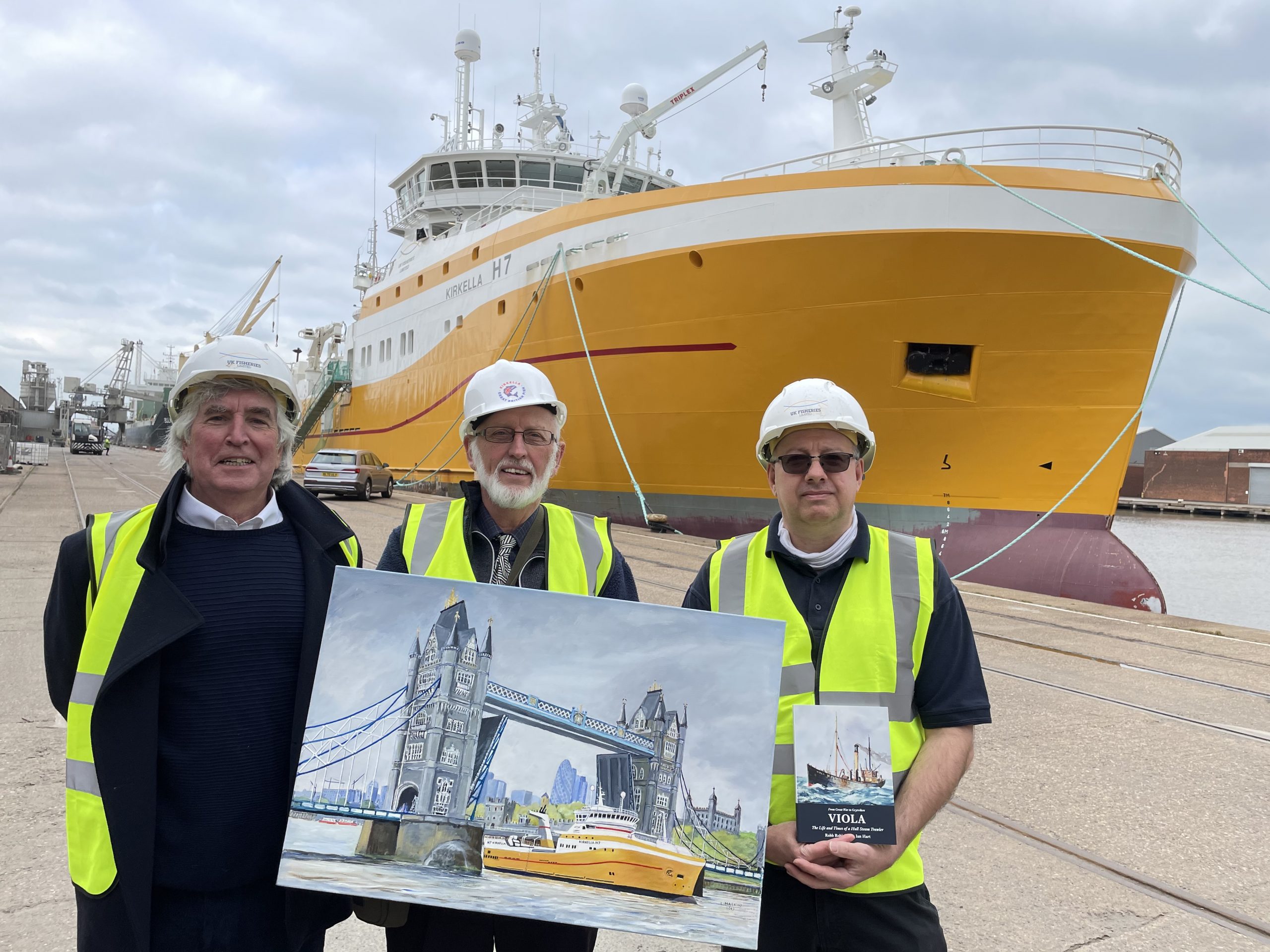 Two trawlers built more than a hundred years apart are among the ships featured in an exhibition of maritime paintings that has opened at an ex-Cold War bunker in Holderness.

The underground galleries at the former RAF Holmpton are displaying 14 paintings created by Welwick-based artist Larry Malkin, including some from a calendar published in 2020 to raise money for the Viola trawler campaign, plus new works.

The exhibition, which is open every weekend and then every day during the school summer holidays, also features 12 paintings from the Second World War and the Cold War periods.

Larry, who works from his studio at home, was inspired to create the calendar after being commissioned to paint a picture of the Norland for the cover of a book. He had already decided to paint the Viola – the world’s oldest remaining steam trawler with engines intact – and offer the work to the Viola Trust for auction, and he was planning another work showing the visit to Hull by the Royal Yacht Britannia in 1977.

The Viola features on the cover of the calendar and for the month of April. Other featured vessels are the Kirkella, Humber Barges, Norland, HMS Bounty, Lincoln Castle, HMS Britannia with HMS Yarmouth, Manxman, Sea Challenger, Arctic Corsair, Rialto and Diana.

The Norland painting does not feature in the new exhibition, having been delivered to Larry’s client. A few days before the exhibition opened Larry also presented the painting of the Kirkella to UK Fisheries, owner of the vessel that is currently unable to work because the UK government has failed to agree a fishing deal with Norway.

But both Norland and Kirkella are included in the story of the calendar, which forms part of the exhibition, and Larry has painted some new works featuring the Viola. All the remaining calendar paintings and the new works are available for sale, with proceeds being shared with the Viola Trust.

Larry said: “It’s an interesting contrast that the calendar features the Viola, built at Beverley in 1906 and now the world’s oldest remaining steam trawler with engines intact, and the Kirkella, built in Norway in 2018 and Hull’s last distant-water trawler.

“The new works which feature in the exhibition include a painting of the Viola being launched at the old Beverley shipyard, and another of her sailing down the river Hull.”

The original of the Kirkella was presented by Larry to Jon Carden, logistics manager of UK Fisheries, at King George Dock in Hull just before the vessel set sail for routine work at a dry dock in Norway.

Jon said: “UK Fisheries sponsored the painting for the calendar and we also attended some of the Viola gin evenings. We would love to see the Viola come back to Hull and take its place alongside the Arctic Corsair in the Yorkshire’s Maritime City project. Meanwhile the painting is likely to go on display at our offices in Hessle.”

Robb Robinson, a maritime historian and trustee of the Viola campaign, also presented Jon with a copy of the Viola book which he co-wrote with Ian Hart.

Robb said: “We are very grateful to Larry and to UK Fisheries for their support. The calendar was a great success and we still hope to organise an auction of Larry’s paintings as part of our fundraising effort, but obviously successive lockdowns have made it difficult to plan a physical event.

“While we consider the options we are delighted that Larry’s paintings will be on display at the bunker. It’s a fantastic collection of Larry’s work and we hope it will take the story of the Viola to a wider audience.”

PICTURED: From left, with the Kirkella in the background: Robb Robinson, Larry Malkin and Jon Carden.