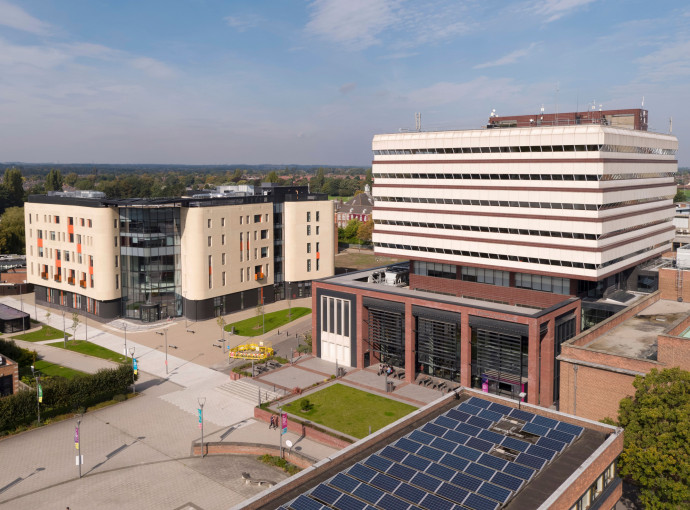 Siemens has been commissioned by the university to undertake a rigorous evaluation of its energy consumption, focused on reducing emissions and finding new, renewable ways to power the campus.
Work on the strategy started in late June. Once completed, it will present a detailed roadmap of how the university will achieve carbon neutral status by 2027.
Stephen Dale, director of estates and facilities at the University of Hull, said: “This project, working alongside Siemens, is an integral part of our strategy to become carbon neutral in time for our centenary anniversary in 2027.
“The masterplan will highlight both changes we can make to our existing operations on campus, to drive down carbon emissions, as well as some significant infrastructure projects to help us reach our ambitious goal.
“Siemens has a proven track record, on an international scale, of working with universities and large organisations to reduce their carbon footprint. The university has in recent years forged strong connections with Siemens, offering our students unparalleled career experience and opportunities.
“This new project, at such an important time for the university, is an extension of that successful partnership.”
The infrastructure-related elements of the masterplan will be completed in three phases.
The first phase, ‘reduce’, will see Siemens undertake a detailed examination of the university’s current campus and energy consumption.
From simple improvements to existing infrastructure, to more thorough inspections of the university’s utility bills, increasing efficiency can reduce energy consumption by as much as 15 per cent.
The second phase is known as ‘produce’. Siemens will work with the university to explore new, renewable technologies to power the campus, and more importantly, which methods can be most effectively integrated into the current energy systems in order to reduce carbon emissions.
Plans to use the transition to carbon neutrality to enhance student experience and learning forms the final part of the masterplan.
The third phase aims to convert the university’s campus into a “Living Lab” allowing researchers, students and other external bodies the opportunity to trial new technologies in a live environment.
Simon Burgess, renewable energy project developer at Siemens, said: “The Humber region is incredibly important to Siemens – we have invested hundreds of millions of pounds in the wind turbine blade factory in Hull, and now are building a new train factory in Goole.
“We were delighted to see the university’s commitment to becoming carbon neutral by 2027; Hull will be one of the first universities in the world to achieve this. The masterplan we’re developing will show the university exactly how it can achieve that ambition in a clear, step-by-step way.
“Siemens is proud to have played a part in Hull’s transformation in the last decade and we feel this project marks another step forward for the city.
“Siemens wishes to establish a long-term partnership with the University of Hull; working together to eliminate carbon, as well as creating a cutting-edge ‘living lab’ on campus where students can learn in an interactive environment, conduct research on energy and sustainability, and collaborate closely with industry.
“Hull is a world-class university, and so we also want their graduates to see Siemens as an attractive place to work and progress in their careers.”
Students at the university will play a key role in the development of the masterplan. Several Master’s students will be trained by Siemens in energy engineering and will conduct research to support the creation of the masterplan.
The university also aims to equip all graduates with a greater knowledge and understanding of sustainability, as the country transitions to net-zero carbon emissions.
Siemens is itself transitioning to net zero, eliminating all two million tonnes of emissions from its global operations by 2030. The company is also a key partner in the Northern Powerhouse, which aims to boost economic growth in the North through investments in skills, innovation, transport and culture.