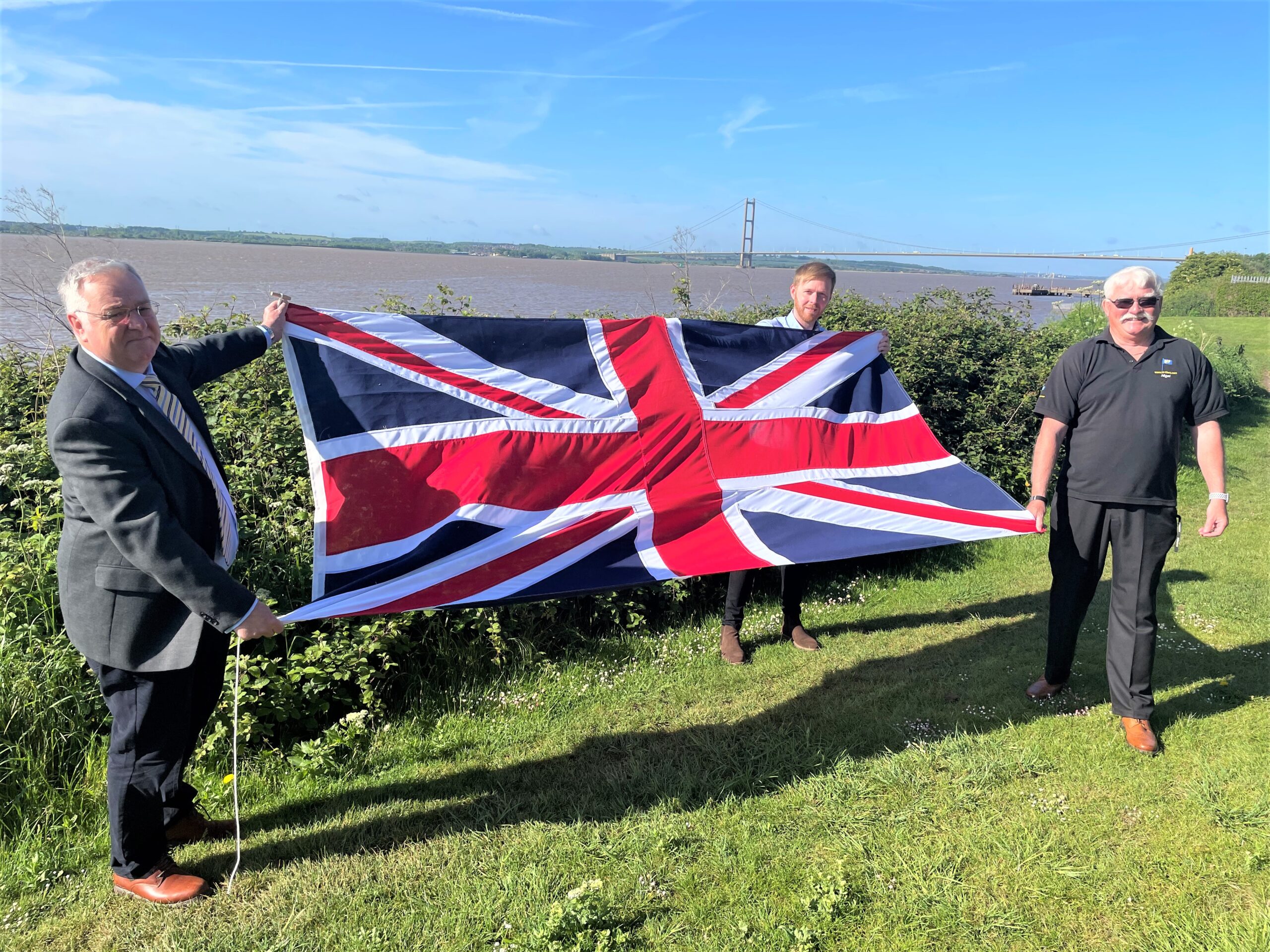 Organisers of a spectacular Platinum Jubilee flotilla and flypast have revealed plans to apply the finishing touch to the celebrations by flying the Union Flag from two of the highest points in the region.

Hessle Town Council has secured agreement with the Humber Bridge Board to raise the flags on each of the two towers of the Bridge on the evening of Wednesday, June 1, the eve of the Queen’s Platinum Jubilee.

Local businesses have rallied round to provide the flags and will take the opportunity to acknowledge the Armed Forces by handing the flag-hoisting duties to Gary “Goose” Cryer, a Parachute Regiment veteran and founding member of the Care After Combat charity.

The flags have been sourced by Hull-based company Hi-Fliers, which was formed about 40 years ago and operates internationally, with a second branch in Florida. The installation costs have been covered by Estates, a property business based on the banks of the Humber at Waterside Business Park, Hessle.

Nigel Cousins, managing director of Hi-Fliers, said: “I took over the business 25 years ago because I saw it as a marvellous opportunity to travel the world. We do national flags, corporate flags, regimental flags, special occasion flags… anything.

“I did the 28 flags of Europe which used to fly next to Hull marina. I also put one on top of Beverley Minster, we supply flags to Morrisons for their stores and a few years ago we put the flags round Parliament Square.

“We have never done a flag above 300ft high and the towers reach 510ft so it will be a high point for us! I don’t know if anybody will be going higher than that for the Platinum Jubilee but they will certainly be the highest flags in our region and we are very proud to be involved.”

Andrew Miller founded Estates around 30 years ago and works to provide affordable residential properties on the north and south banks of the Humber.

He said: “We have a team of 12 and we use the Humber Bridge several times every day. It’s a great asset to the region and has helped to develop the economy on both sides of the river.

“As soon as I heard about this idea I decided instantly to do whatever I could to make it happen. It’s very important that we wave the Union Flag and respect the flag, and I have taken that a step further by inviting Gary ‘Goose’ Cryer to take my place and raise the flags.

“As a business we are keen to support Care after Combat, who provide life-changing and life-saving support to some of our most vulnerable Armed Forces veterans. As its president and a founding member, Goose Cryer, gave distinguished service to his country and continues his essential work helping veterans most in need.”

Hessle Town Council is organising the Humber Platinum Jubilee Flotilla of 70 ships and boats on Thursday, June 2 as a celebration of Her Majesty’s reign and a re-enactment of the Humber flotilla of 60 boats for the Queen’s Diamond Jubilee in 2012 and the historic occasion in 1897 when watermen gathered their boats on the Humber in celebration of Queen Victoria’s 60-year reign.

The town council has liaised with Visit Hull and East Yorkshire, the tourism arm of East Riding Council and Hull City Council, on a programme of activities during the day that will include music and entertainment at Hessle Foreshore and Hull Marina.

Michael Wood, the East Riding town crier, will deliver a Royal proclamation at the beacon on Hessle Foreshore at 2pm on Thursday.

The RAF Battle of Britain flypast by two Spitfires at Victoria Pier in Hull will signal the start of the flotilla at 7pm. The vessels are due to arrive at the Humber Bridge at 8pm and will then turn round west of the bridge and begin their return to Hull at 9pm, with some continuing to Grimsby.

At 9.45pm there will be the ceremonial lighting of Jubilee beacons at Hull, Hessle, North Ferriby, Barton and other locations around the estuary – all part of an initiative to light 2,022 beacons around the UK.

Beacons will also be lit in all 54 Commonwealth capitals and the Principal Beacon lighting will take place in a special ceremony at Buckingham Palace.

Mr Withers said: “The Queen holds a special place in the history of the Humber Bridge having performed the official opening ceremony in 1981, and as far as we can establish this is a first.

“Hi-Fliers supply windsocks to the Humber Bridge but we’re not aware of anybody having flown flags from the top of the towers, even at that opening ceremony 41 years ago! It’s a lovely finishing touch to a unique Platinum Jubilee celebration.”