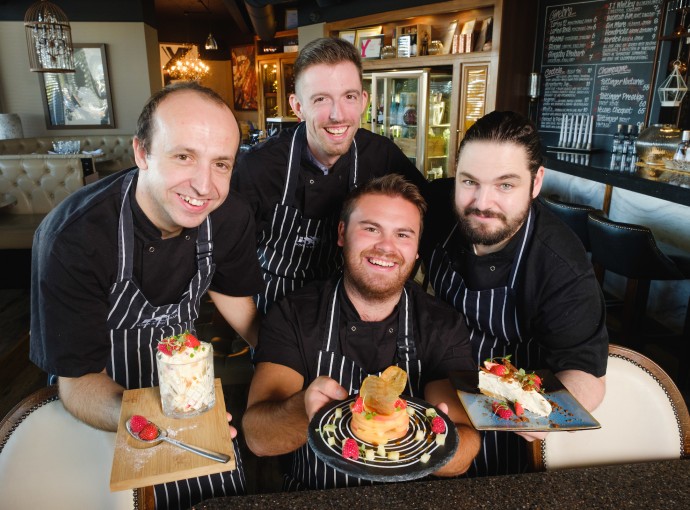 An award-winning restaurant is set to celebrate the region’s biggest event of the year by unveiling an array of desserts featuring the flavours of Hull Fair.
Chefs at 1884 Wine and Tapas Bar considered adapting such Walton Street staples as patties, hot dogs and candy floss for the fair-themed treats which will make their debut this weekend along with a new-look Sunday lunch menu.
But in keeping with the standards set since the restaurant opened in 2015 they opted for “pudding on the style” with a carousel of desserts based on brandy snap, toffee apples and the iconic Hull Fair pomegranates.
Deborah Spicer, director of 1884 Wine and Tapas Bar at Wellington Street West, Hull Marina, set her team the challenge of creating the special dishes as the city awaited the arrival of the fair and the restaurant prepared to welcome the showmen and their families who drop in every year.
They served up a brandy snap cheesecake, a deconstructed toffee apple and an Eton twist with a hazelnut brittle as a new take on cinder toffee, drizzled with pomegranate syrup.
The desserts will be available from Friday, October 5, as the fair swings into action and will stay on the menu into November, when the restaurant launches its Christmas menu.
Fairground folk making their annual visit to 1884 Wine and Tapas Bar on the fair’s rest day will also be able to experience the first Asado Sunday as the restaurant brings a Spanish twist to the traditional English roast for the autumn and winter months.
Starters feature a pork, fig and sage terrine wrapped in streaky bacon, chestnut mushrooms combined with chillies and red onion, and a Spanish spiced bean broth with home made bread. Mains offer topside of beef rubbed with garlic and rosemary, chicken breast with a Spanish rub, rolled belly pork stuffed with apple, thyme and garlic, and flat mushroom stuffed with blue cheese and an onion cream sauce – all with a selection of vegetable sides.
Desserts include a white chocolate crème brûlée, chef’s caramel nut, and chocolate and orange cheesecake – plus the Hull Fair selection. Prices are just £15 for two courses and three courses for £20, with service from midday until 4pm every Sunday.
Deborah said: “We are one of the few restaurants in the area that opens seven days a week and we decided that for the seventh day we would do something a bit different. Asado Sunday takes the Spanish word for roast and is all about combining Mediterranean flavours with a great English tradition.
“It’s been a rollercoaster week for the chefs, changing our Sunday menu and devising the special desserts but they love coming up with new ideas and hopefully the showmen who come in every year on their day off will roll up and enjoy all the fun of the fair on a plate!”