An Appointment With, Legal, Magazine 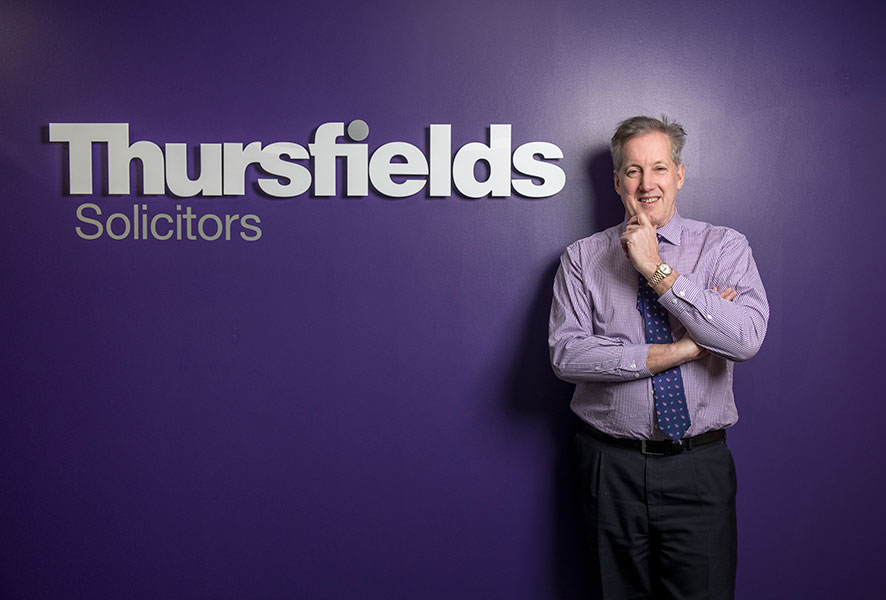 Thursfields’ new chairman Nick O’Hara is eyeing a place among the country’s elite legal firms. He tells Jon Griffin about his 40-year career

Nick O’Hara does not mince his words when he recalls the economic downturn of 2008-09. “It was horrendous. We lost 40 per cent of our workforce during the recession.

“I hated every minute of it, but it had to be done. There were problems all over the place, our overdraft was maxed out – the bank had been willing to lend you everything you asked for and more.

“I had been having discussions with a senior partner because I was frustrated that the business didn’t seem to be going anywhere. The message was ‘work harder and sell your services cheaper’ but that approach was not sustainable.

“If a partner didn’t want to do anything they didn’t do it – it needed a fresh and radical approach.

“One of the scariest decisions I had to make was to close the legal aid department down. The crime team was passed on to another firm and that was sad, because legal aid is there to help the vulnerable. It is such a shame that it had to be done at the expense of the poor and vulnerable.

“But it had to be done because it was not financially viable and we were not in a position to continue subsidising it.

“The decision was made in 2012 and it took 12 months to implement. It meant we could invest more in areas like better IT equipment and improved salaries for the staff.”

Entrepreneurs – and entrepreneurial flair – come in all sorts of shapes and sizes, from Richard Branson and Alan Sugar down to the countless one-man operations dreaming of fame and fortune. And that entrepreneurial spirit is encapsulated in the radical new approach which turned a financially fragile regional law firm into the thriving legal enterprise of today.

Nick, who made the move up from managing director as this magazine went to press, said: “I pulled a team of people around me who had the same passion and vision and drove through change. My wife Michelle is an employment lawyer who is a great business strategist which helped me greatly through that process. But we had a few sleepless nights.”

Today, Thursfields, founded in Kidderminster in 1877, is virtually unrecognisable from the legal outfit which faced a distinctly uncertain future as the worst recession for decades swept through the sector more than 10 years ago.

“The business that I took over was a collection of sole practitioners working under the same roof. I do not think that there was any team spirit.

“This is so different from what I inherited – the whole ethos, the team. In reality, it gave me the justification to persuade under-performing partners that they had to change or move on.”

That persuasive approach provides a significant clue to Nick’s style of management – there’s steel as well as substance to this affable and approachable lawyer. “My style is that I try and bring people with me where I can. But there is also a line in the sand, you are on the bus or off the bus.

“Today, it is a good team right across the business and they have to work collaboratively in the best interests of Thursfields and the clients. But there is still a long way to go.”

Working in collaboration has never been more vital than during the long months of lockdown – and Nick has paid glowing tribute to the Thursfields team for their efforts.

“We managed to get all our staff we needed to work set up and working from home in the week before lockdown started. We ran a very skeleton staff on a rota basis in the offices to take incoming post and to scan it onto the system and to send outgoing post as and when needed.”

He said there had been a big drop in new instructions in most areas although the family and wills and estates department had still been in great demand. “We furloughed about 30 per cent of the workforce but it fairly quickly became apparent that we needed to bring people back.

“There have been some voluntary redundancies but not many. New matters coming into the business in July were back to the levels they were in July 2019. All our staff are now able to work from home if that suits them.”

Nick’s vote of confidence in Thursfields’ collaborative approach to coronavirus was echoed by business development manager Dani James, who said the firm had “fast-forwarded” its digital plans, with the switch to webinars proving “very successful”.

“The firm has adapted well and quickly to enable continuation of the work required with little impact to clients and to protect the well-being of the workforce by further investment in technology enabling remote working,” she said.

Managing a team during a global pandemic notwithstanding, it’s been a long journey for Nick – a remarkably youthful 63-year-old – from Monday April 2 1979, the day he joined the Worcestershire firm to train as a solicitor.

He had studied law at the then Wolverhampton Polytechnic and later Chester College of Law. His first interview to become an articled clerk took place at a legal sector Christmas party and he started at Thursfields’ Kidderminster office after passing his final exams.

He qualified as a solicitor in 1981 and became a partner five years later in 1986, effectively running the firm’s Stourport office for 25 years. 40 years later his career path resembles the life and times of a committed professional with an entrepreneur’s eye for the pitfalls of the trade, in addition to the benefits.

“Law seems to be a fairly well-defined profession but when you look at it, it’s really wide – it’s six or seven businesses in one.

“A criminal lawyer is nothing like a corporate lawyer. I did different areas of law. I started off cutting my teeth doing criminal law in the magistrates’ courts.

“One day, I was called out in the middle of the night to represent someone. It was my third call that night and it was three or four o-clock in the morning. The duty sergeant said that he was not interviewing the man in the cells until the following morning because he was far too drunk.

“The following morning, I had to represent another person at magistrates court who had been taking cars without consent and he was given a suspended sentence. He was a prolific offender, he left the court and the police caught him stealing a car.

“I went back to the office and said, ‘I can’t do this any more, it killed me.’ You get a rare insight into human nature. I lived and breathed it and you were looking to try to do your best for people.

“It taught me that there are two types of people, there was the type of person who wants to grow and change and learn from their mistakes, and there are other people who do not.

“Then I moved into an area where I was still trying to help couples in failed marriages and help them separate in a way that helps the client to move on. All too often, people tend to spend a lot of time wallowing in their own difficulties.”

He had an unusual accession to power when the senior partner became ill in 2007, and the remaining partners organised a vote on a new leader for the company.

“There were at least four other partners who should have got the role on the basis of seniority – they were older and more senior than me.”

At the age of 50, Nick took on the role of managing partner on January 1, 2008. Less than a year later the Western economies and the business world were caught in the vicious crossfires of the aforementioned recession, fuelled by the sub-prime mortgage crisis in the US which led to the banking bailouts of October 2008. It was, in anybody’s language, a real baptism of fire for the man voted in as boss by his colleagues.

But Nick stuck to his guns in the arduous task of turning around the fortunes of Thursfields and putting the law firm on to a more stable financial footing. Instead of spending his energies trying to get 15 partner-owners onto the same page with decision-making, he laid the groundwork for a new corporate structure with a small executive board. In 2014 the firm incorporated into a company and a new role of managing director was created.

That approach, adopted after outside business consultant Malcolm Walton had taken an in-depth look at the state of Thursfields, has paid off. Thursfields has grown revenues by more than 140 per cent, and total revenues have mushroomed by millions of pounds. Now the firm is edging closer and closer to Nick’s stated ambition of leading the firm into the Top 200 list of law firms across the UK.

“The Top 200 is based on turnover and our current turnover is £9.2 million. We need to get to £11 million. But with the people we have got here and the people we are bringing in I am confident we will get into the Top 200.

“We had six years of growth, which has been 20 per cent a year constantly. Another year of 20 per cent growth and we will be in there.”

The reinvention of Thursfields over the past decade or so has gradually emerged against a background of unprecedented change in the legal sector.

“There have been huge changes in the sector and it will continue to change. I look at the teams and see the pressures they are under and the response times they face.

“It is so very, very different. I have huge admiration for the young lawyers starting now. This generation of lawyers works harder and are under more pressures.

“I look at some of the people we have had from bigger firms where they have been expected to do 60 to 70 hours a week to hit their targets and as a result, they have not been seeing their children and wives and have no interests outside work.

Thursfields’ enlightened approach comes as the legal sector continues to face continued consolidation, according to Nick. “Law is just going to get more competitive and I can only see firms merging and combining to consolidate in the marketplace.

“It is driven by the cost of compliance and technology. For smaller firms, it is too time-consuming to do compliance. The marketplace is demanding well-regulated businesses with the most up to date IT and means of communication.”

But it’s not all about efficient technology at Thursfields. The firm has embraced a string of Corporate Social Responsibility initiatives in recent years, including adopting as its chosen charity New College Worcester, a non-maintained special residential and day school for blind and partially sighted aged 11 to 19.

As much as anything, Thursfields are determined to remain an integral part of the geographical area they serve, a community- minded policy encouraged by Nick.

“Given the choice, I would prefer to spend more time out there. I still have the opportunities to see clients and discuss legal matters with them. But I do not do legal work, I am in a wholly managerial role.”

Nick, whose wife Michelle succeeds him in the role of managing director, may miss chewing the fat with long-standing clients, but his management style has clearly paid invaluable dividends for Thursfields.

“I think that one of the things I have done is make Thursfields run as a business. We are now a proper business with a proper board structure with proper plans. Everyone knows what their responsibilities are and the part they are playing in the business.”