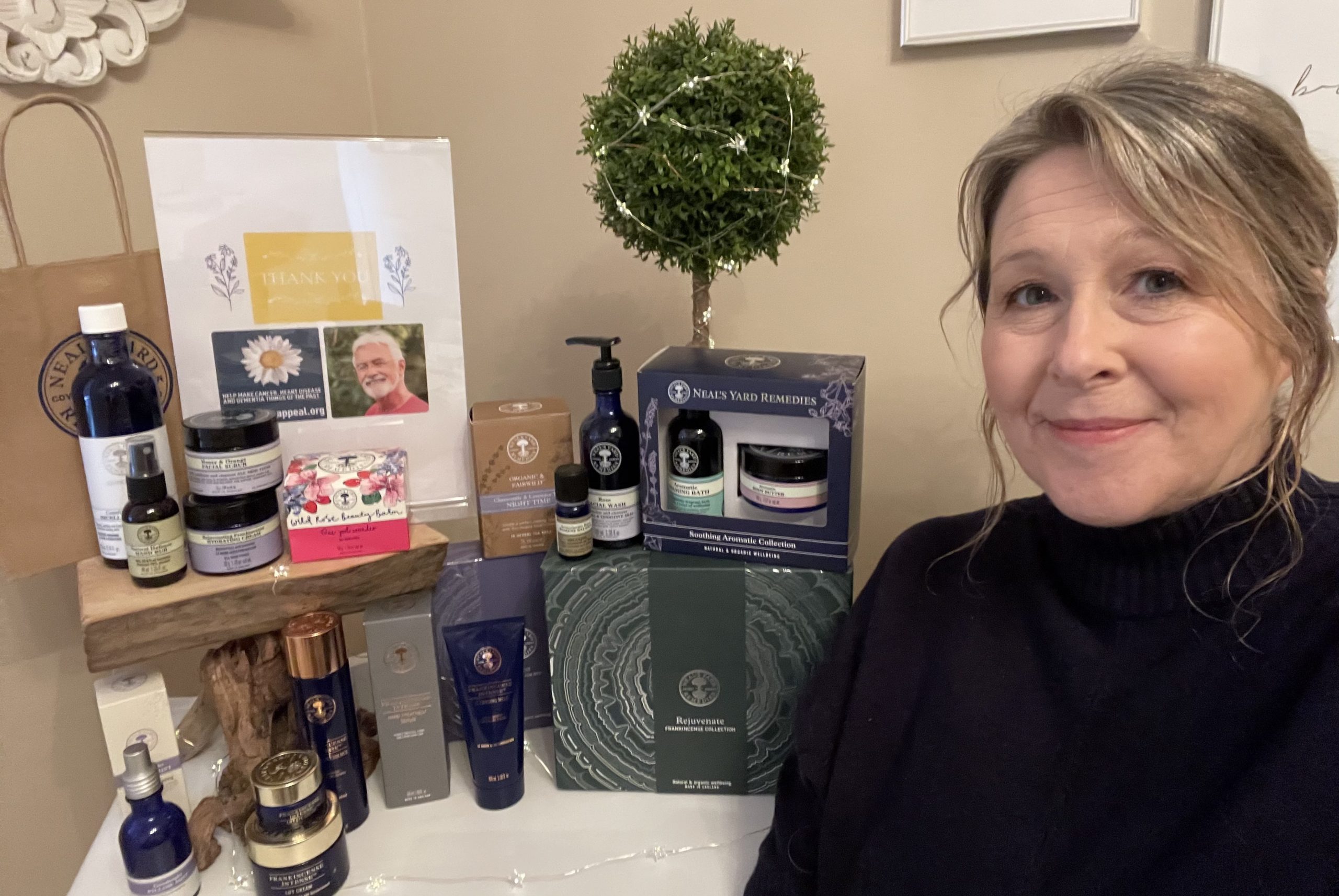 A holistic therapist has boosted the wellbeing of a leading local charity by raising funds and awareness from a campaign that reached customers the length and breadth of the country.

Karen Engstrom, who runs her holistic therapy business and her Neal’s Yard Remedies Organic online shop from her home in Ackworth, West Yorkshire, contributed her commission from a week’s worth of sales to support the Daisy Appeal in memory of her late uncle, who lived hundreds of miles away in Cerne Abbas, Dorset.

The Daisy Appeal, which is based at Castle Hill Hospital, Cottingham, and is pioneering research into cancer, heart disease and dementia to help patients in the Hull and Humber region, received £500 and spread the word of its work as far afield as Lancashire, London and Dorchester.

Karen said: “I’m absolutely overwhelmed at the generosity and support from family, friends and clients during the week-long campaign.

“Orders were placed through the special link for my online Neal’s Yard Remedies shop dedicated to the Daisy Appeal and the week ended with a fabulous virtual spa with a group of wonderful ladies from Lancashire who supported the appeal and brought the link to a close with the total commission raised amounting to £300.

“In addition to the orders received, cash donations have also been coming in which has brought the total to an amazing £500! I would like to take the opportunity to thank everyone who supported this amazing charity during the week.

“It has also been a fitting tribute to my uncle Keith as the anniversary of his passing approaches and I would like to thank the Daisy Appeal for all their help in promoting the fundraising event and allowing me to help this wonderful charity.”

Karen worked as a secretary at banks in Pontefract and Castleford and for KMPG in Leeds but retrained to launch a new career as a holistic therapist 14 years ago.

Her uncle, Keith Godding, worked as a contracts engineer in the oil industry and lived in England, Scotland, Norway and the United States before retiring to Cerne Abbas. He’d had surgery and treatment for cancer of the oesophagus after being diagnosed in 2006. In February 2020 Keith was diagnosed with liver cancer and he died the following month.

Karen wanted to raise money in his memory and selected the Daisy Appeal – even though it is based 300 miles from Keith’s home – after reading online about the charity’s work with cancer and dementia, which have both affected her family and friends.

Claire Levy, fundraiser at the Daisy Appeal, said: “Karen has done a fantastic job raising a significant amount of money in such a short time and helping us spread the word about the work of the Daisy Appeal.

“Our main area of activity is across East Yorkshire and Northern Lincolnshire but our pioneering research is of national and international significance and we would love to hear from more individuals and businesses who can support our work, wherever they are based.”

The Daisy Appeal has a target of £8.2 million to complete a radiochemistry and cyclotron unit that will produce radioactive tracers at Castle Hill Hospital to improve accuracy and detection rates for cancer, heart disease and dementia and provide the opportunity for patients to receive more personalised care leading to earlier diagnosis and giving them better treatment and quality of life.

Once the facility is fully functional patients from a wider geographical area will have access to its services. The charity aims to play a leading role in clinically relevant PET-CT research over the next two decades and to show that the technology can be brought to the individual patient, quickly and effectively.

To find out more about the Daisy Appeal, visit daisyappeal.org