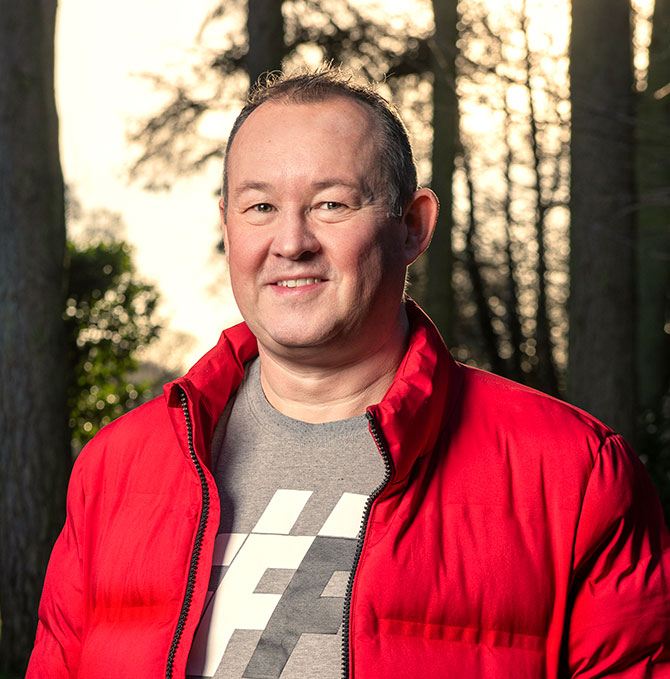 Alistair Burnett’s twin passions have always been computers and numbers – and at Reality Solutions, he’s relishing combining both. By Sam Hawcroft

Alistair Burnett deals in Sage. No, he’s not a sales rep for Paxo, but rather the driving force behind Reality Solutions, which is an expert in the leading accounting software.

Before you accuse me of being corny, it’s a joke he likes to tell, too. “We do Sage. Not the herb!” he laughs. It’s clear from the outset of our Zoom chat that Alistair is relaxed and personable, which is surely a key factor in the success of the IT business he set up in Hull more than 20 years ago.

For Alistair, Reality Solutions marks the confluence of two career paths he’d considered in his youth. He’d been expected to follow his father into the family timber business, but as a child of the 1970s and early 1980s, Alistair took a keen interest in emerging computer technology, from playing games on his ZX Spectrum to learning programming at school. Indeed, he moved from Hymers College to Wolfreton purely because the latter offered a computer science course. “At the time, moving from private to state school was unheard of,” he says, “but I’m glad that my parents made the right decision.” He also had a flair for numbers, and the best way to combine the two, as suggested by his sixth-form careers advisers, was to go into accountancy. Alistair wasn’t sure whether there was even a career in computing; accountancy, though, was rock-solid. After all, you never saw a poor accountant, he reasoned.

He went on to study accountancy at what is now Northumbria University, but struggled to find any work in the Newcastle area after he graduated in 1991. “It was really bad,” he says. “There were no jobs around at the time. I couldn’t even get a job at McDonald’s!” So he came back to Hull and began to work for Dutton Moore, one of the region’s longest-established chartered accountants. There he did get the chance to work with computers to an extent, working on the firm’s in-house IT systems as well as qualifying as a chartered accountant. “I got a really good background understanding of business, but it came to a point when one day, I was put on the spot and asked, did I want to be an accountant or play with computers? That’s when I realised that I wanted to control my own destiny.”

So, in September 1999, Alistair set up Reality Solutions, having spotted early on that computing and accounting would grow to be inextricably linked. “Most accountants at the time weren’t really interested in looking into that sort of world – they were just into pure accountancy. They didn’t realise that nowadays accountancy and IT go very hand in hand, which was the way I was looking at going.”

From day one, Alistair partnered with Sage, as for him it was more about the software applications and what they could do for businesses. Sage is an incredible success story in its own right, having gone stratospheric from humble beginnings in 1981 when Newcastle University student Graham Wylie took a summer job at a firm of accountants, tasked with writing some software to help with record keeping. Less than 10 years later the company entered the FTSE 100 and, to cut a long story short, it now has more than six million customers worldwide and offices in 24 countries.

“We partnered with Sage as it had a good brand name, and it did what it promised,” says Alistair. “We had looked at other software but it didn’t quite do what we wanted, and we wanted something that was simple. So the aim was to grow the Reality Solutions business with the Sage brand name.” This meant going into local businesses to promote the various tools on offer, everything from payroll to accounts, and Alistair worked around the clock to get things off the ground. “Life was hard at first – I was working literally every hour that god sent, pulling all-nighters just to get the work done.”

In the early days Alistair was working out of rented offices at the premises of the family business, NR Burnett, but in his first year he took on two staff and soon began to outgrow the space available. “We just kept rolling and rolling over the next few years, adding customers on, adding more staff on, so we got to the point where we had about 10 staff in the building and my uncle, who was managing at the time, turned around to me one day and said, your rent is going up. I think we’d taken over four offices at that point! And he was going to double our rent overnight. So, I thought, we can’t be doing with this, so we moved premises into our own offices in Hull.”

The move to Hamburg Road in Sutton Fields in 2008 was also a conscious decision to stay within the city, says Alistair. “I thought it was a better area to be in, as staff can get there more easily. There are more prestigious offices out of town, but there are complications, as well as cost.” Staying local also meant he could be on hand to help businesses get the most out of the software, although the firm does have customers around the country, from one-man-bands to big e-tailers in pretty much every industry you can think of. “We always wanted to stay within a geographical area,” he says. “We wanted to have the ability to just pop in and have a coffee with somebody and say, how are you doing? That’s still very much my ethos. I love innovating, too – looking at how business processes work and trying to solve problems for people. For most businesses, time is the commodity, and they’re asking, how can we save time? How can we make the tools of the job work for us better? That’s the sort of thing that keeps me enthused – every day there’s something different.”

Along the way Alistair realised that companies were increasingly looking for one provider to do everything, a need Reality Solutions evolved to cater for. “It became more than just the software tools and business applications – it was about the pure IT as well,” says Alistair. “So our IT department – building servers, networks, cloud-based solutions – has grown over time. This now represents about half of the business, and it’s come out of customers wanting just one person to call, so they know that when they ring us, they will get an answer for anything that’s IT-related.”

The market is changing all the time, with more cloud-based solutions such as Xero, QuickBooks or FreeAgent vying for Sage’s slice of the pie. But, as Alistair says, these do not offer anything like the full business solution that Sage does, and I have to agree, having used FreeAgent for my own business for more than eight years. Its easy-to-use interface works for me precisely because I am not an accountant, but I couldn’t see it being a good fit for any business with more than one employee and an accounts department, or indeed anyone who understands what “double entry bookkeeping” means. Sage, on the other hand, speaks the language of accountants. “All of these other systems just hide that information, whereas Sage kept that functionality,” says Alistair. “You can still see your debits and credits in it, which is why accountants like it. Keep your accountant happy, that’s rule number one!”

As an IT business, Reality Solutions has been well-placed to weather the storm of the pandemic, but the company has had to adapt just as much as its customers, Alistair says. The sharp rise in the number of businesses moving to wholescale home working has inevitably led to an uptick in the take-up of IT services, but the applications side of the business has taken a different turn. “Because we haven’t been able to get on site to carry out our Sage training, which is another major arm of our business, our customers’ ability to use our services has actually gone down. So, very quickly we thought, what are people going to need? Home working is here to stay, and if people believe that life’s going to go back to normal at the end of April, they’re having a laugh. I think a lot of businesses will be transitioning to a hybrid solution where they will have some people in the office and some people at home – it will just be more flexible.”

And it’s not as simple as saying to an employee, here’s a laptop, off you go – there are whole business processes that need to adapt to long-term home working. “If you’re an accounts team, how are you going to get all the paperwork? Yes, some of it comes through email, but what about all the stuff that comes through the post? How do you scan it? How do you then get a copy of that invoice to the management team to approve it? One of our core aims is helping businesses to adapt to home working through the applications, not just the technology, so for instance that’d be wrapping security around it and using clever bits of software, such as a web page that can send out purchase invoices around a company. I think home working is here to stay, so why not invest in solutions that are going to help?”

Is there anything Alistair would have done differently over the past years? “That’s a good question,” he says. “Staff are your absolute resource and you’ve got to make sure you pick the right ones. So, looking back, I think I’d have got that extra staff member in quicker – it’s always that decision versus money… so your profit goes up, but then you take on a staff member and your profit goes down and you have to build it back up. It’s about taking a bit of a risk – and you have to spend time with your staff, make sure they grow, and nurture them so they can help the business quicker. We are a service industry and our key people are our staff. I love them to bits – they’re a brilliant team.”

Does he still find any time to play computer games, I wonder? “I do, occasionally,” Alistair laughs. “Just driving games!” But he does try to make sure that he leaves the screens behind for a bit of fresh air as much as he can, especially as back-to-back Zoom meetings are becoming the new reality. “Suddenly you finish one, and then you head straight into another. Finding the downtime to be able to clear your head a bit will, I think, be the next problem around anxiety that businesses are going to have,” he says.

And, with that, I bid him farewell. I’ve got another Zoom interview to do…