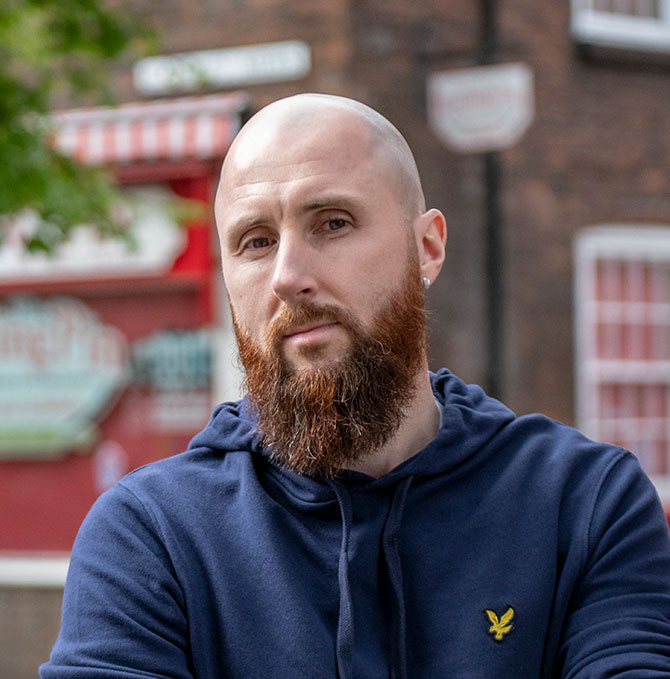 Running not just one, but two businesses while working on an offshore oil rig for weeks at a time would sound like an impossible task – but Dan Giblin is a man who likes a challenge.

He set up the Rolling Pin in Hedon with his brother-in-law Craig Morgan in 2017, and then came up with the idea for Rent and Borrow Stuff during the early stages of lockdown in 2020. The former is a busy bakery in the heart of the market town, while the latter is an online venture still very much in its infancy – but it has huge potential for expansion.

On leaving school, Dan had originally aimed to go into computer game design – but after chatting with a friend of a friend who was in the Royal Navy, he decided to give that a go instead, joining the communications branch and eventually spending four years in the service.

Shortly before he left the Navy, Dan met his future wife Lynsey – and her brother, Craig Morgan, a trained chef, who was considering a career on the offshore rigs. “I’d already thought about this when I left the Navy, so I went and had a look,” says Dan. “I did the survival course – which was 16 years ago now, and I’ve worked my way up from making beds and cleaning toilets to becoming a materials and logistics supervisor. And this has given us the money to be able to invest in the businesses.”

As most entrepreneurs will tell you, having the right people is key to the success of any business – and this is even more crucial in Dan’s case, as he’s often thousands of miles away. “Luckily for me, I’ve got a bloody good team,” he says.

There are seven members of staff at the Rolling Pin, with Lynsey working in the shop three days a week and running all aspects of the day-to-day business when Dan and Craig are offshore. “Without Lynsey, none of this would be possible,” says Dan. “She runs the whole show when me and Craig are away.”

Dan and Craig’s business partnership works perfectly because Dan’s the numbers man, working on strategy and development, while Craig, with his extensive hands-on catering experience, trains the staff and focuses on the products and services, which also include outside catering at corporate and private events.

But, while Dan might be halfway around the world, he is not cut off from civilisation. “When I’ve finished my shift at night, I’ve got all my tech,” he says. “I’ve got my laptop, my iPad, and my phone – and I can talk to my wife, who photographs the invoices and I can then post them to the accounting system.”

When Covid first hit in 2020, Dan ended up in a “bubble” watching events play out from afar, having only just started a 12-week stint on the rig. “The world was going crazy, and we were just watching it unfold while we went about our daily business.” While he did have to close down the bakery during the first lockdown (it’s remained open throughout since then), being stuck in quarantine in Africa did afford him a bit of time to work on his business plan for Rent and Borrow Stuff.

When Dan launched the bakery, he sought the help and advice of Alan Gordon-Freeman, from the Hedon-based business agency Sirius. Despite having no experience in drafting up business plans, Dan’s certainly impressed Alan. “I’m not being big-headed, but he said, that’s fantastic, and asked me if I’d done anything like that before – and I said no, I’d just looked at different templates and put something together. And the day we signed the lease on the Rolling Pin, he said if I had any other ideas, I should run them past him – and I said, well, actually, I do…”

Dan pitched the idea of Rent and Borrow Stuff, but it was put on the backburner for a few years as the bakery took off. During the pandemic, though, Dan realised he’d “kick himself” if he didn’t get it off the ground before someone else stole his thunder. And he stresses that this business is solely his venture. “Because this was my idea, I thought, I’m going to run with this one myself – and I don’t need a partner.”

So, how does it work? It does what it says on the tin. Say you have a drill, a lawnmower, a wallpaper stripper, or, well, any “stuff” that you’re not currently using, you could list it on the Rent and Borrow Stuff platform. You set your daily rate, add a refundable security fee (in case the person who borrows it breaks it), and that’s about it. You earn a few quid from your unused tool, the borrower doesn’t have to go the expense of buying it, and Dan takes his cut from the fees. A win-win-win, if you will.

The beauty of the platform is that puts people together with items that are available to borrow near them, so it could be used anywhere around the world. It requires minimal input from Dan, as he can approve listings within minutes even if he is away offshore, and because it’s not him renting the items out, he shouldn’t have to get embroiled in any legal or insurance disputes as it’s all there in the terms and conditions.

For now, he’s starting to put the word out in our region, with ads in the local press and leaflet drops in various areas of Hull and East Yorkshire, then he will look at raising the profile of Rent and Borrow Stuff nationally; he’s already had inquiries from Germany and further afield. His web host, GoDaddy, was also impressed, and told him to buy up the .com and .net domains in case anyone else came along and pinched the idea.

Dan acknowledges that the situation is a bit chicken-and-egg, in that he can’t pump more money into it until it starts making money, but when it does gain a bit more traction, he plans to upgrade the web platform and perhaps create an app. “Because it’s a sideline business, everything that I put into it is out of my own back pocket,” says Dan. “So, when it starts making money, we can look at revamping the website and creating version two, and possibly offer subscriptions for people who are renting multiple items. We’ve got the plans in the pipeline – it just needs to start generating income. Once it breaks even, then I can start investing back into it.”

Back in Hedon, the recent opening of a Greggs store at the filling station half a mile away hasn’t had a negative impact on the bakery, which, Dan says, is down to the Rolling Pin’s reputation for high-quality, home-baked products that offer great value for money. “The customer service is second to none,” he adds, “which I think helps us tremendously.”

It’s still Dan’s offshore job that is paying their bills at the moment, though he admits that working on the rigs up to retirement age would be a “big ask”. “We’re currently not taking a penny out of the bakery at the moment – it’s a long-term investment. As long as the staff and suppliers are all paid, and we’re making a name for ourselves, that’s the main thing with the bakery. With Rent and Borrow Stuff – let’s see how good it can be. If it’s got potential, then I’ll come back onshore and concentrate on pushing it. I’m in the fortunate position that I’ve got good money coming in from my own job, so I can concentrate on getting these businesses established and I don’t have to worry about taking any money out of them.”

Rent and Borrow Stuff does sound like a concept that could be put in front of the fearsome panel of investors on Dragon’s Den – but Dan’s not looking for outside input at this stage. “I’ve had people asking to buy into it, but I can’t do that at the moment. I want to make sure that we could get a return on any investment.”

With two businesses and a family – he has two children aged 16 and 18 – how does Dan cope with “spreading himself all over”, as he puts it?

“I just get on with it. It might sound daft, but I just do,” he says, matter-of-factly, before adding that he’s also studying for a qualification in project management, just so he has “something else to fall back on if the oil industry goes sideways”.

It’s a work ethic that was instilled in him by his parents, and which he is passing on to his own children. “You don’t get anything in life if you don’t work for it, and that’s what I tell my kids. If you want to be somewhere, you’ve got to be willing to put the graft in. I couldn’t buy into a business and let it go to the wall – I’ve got seven members of staff relying on us to make sure it runs properly.”

Another top tip Dan has for people embarking on their own businesses – do your research. “Make sure you’re going into the right market, and make sure you’ve got a clear idea of what you want to do, why you want to do it, and have your goals and your vision set out. For instance, we took the shop on without thinking, who’s going to do the cashing up? We were that wrapped up in starting the business and only realised on that first day when we got the keys to the building. I asked my wife if she could do it – and that was it. She was dragged in at the deep end!”

Business is clearly a passion for Dan, who says, modestly, that he has “taken to it quite well”. He’s built up a formula that clearly works, and it means that he remains in charge whether he’s at home or abroad. And it’s a formula he can transpose to Rent and Borrow Stuff, when the time is right. “I didn’t go into a partnership with this business,” he says, “because if anybody does come along, I can offer them a position, but I’m still going to be the majority shareholder and the majority decision-maker, and I can go forward at whatever pace I want to.”

It costs nothing to sign up to Rent and Borrow Stuff, so why not check it out? Perhaps that drill gathering dust at the back of your shed could end up earning you – and Dan – some money…