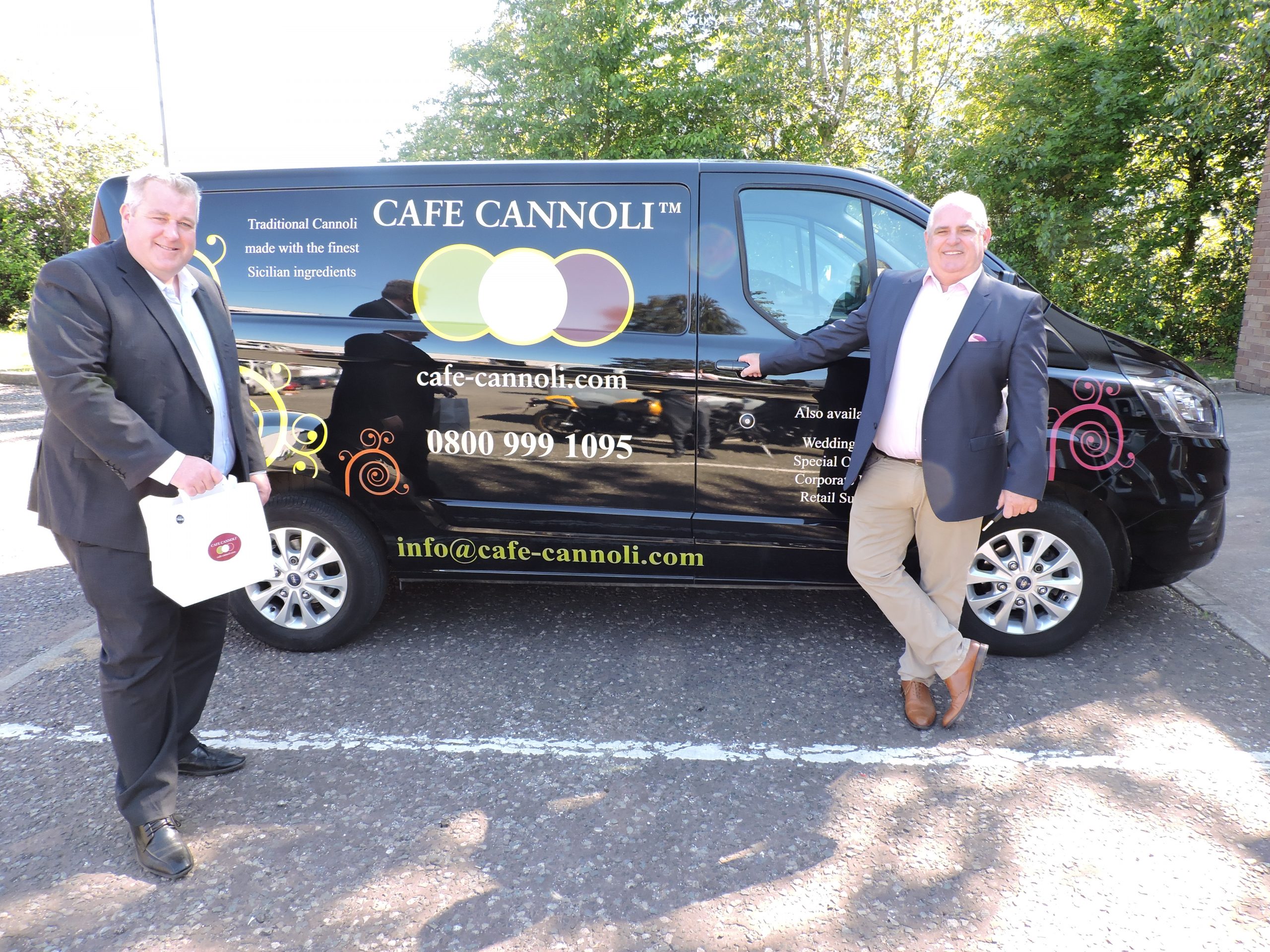 A tasty idea to build a business based on a staple of Sicilian cuisine – the cannoli siciliani – has now seen former stockbroker Nigel Wright move into his first set of premises.

Ian Parker, joint managing director of commercial property agency John Truslove, worked with Nigel for months during the Covid lockdowns until the time was right for Cafe Cannoli to set up home in Unit 78, Heming Road on the Washford industrial estate in Redditch.

The next step will be to take on new members of staff to help with the growing workload.

It is a major step forward for a business inspired by an episode from legendary gangster series The Sopranos.

Nigel said: “I worked as a stockbroker in Birmingham until being lucky enough to retire early. I carried on with trading privately but wanted to do something completely different. I love Italian food and an episode of The Sopranos made me think of cannoli and I discovered that it was rare to get good Sicilian cannoli made with truly authentic Sicilian ingredients.”

A trip to Sicily to learn how to make the pastry delicacy led to Nigel building relationships, sourcing and importing all his ingredients from genuine sources throughout Sicily.

“The biggest lesson I learnt from my time in Sicily was that authentic Sicilian cannoli needs to be made with Sicilian sheep’s milk ricotta – we won’t use anything else. We pride ourselves on the quality of our ingredients, even our pistachios are grown on the slopes of Mount Etna.  However sourcing the right ingredients was only the start as it has taken a lot of hard graft, working 110-hour weeks and 21-hour days sometimes,” he said.

Nigel launched his business in 2017 aided by his partner Deborah, selling at markets and food festivals, but the coronavirus pandemic presented huge challenges.

“In 2019 we launched the first UK cannoli lit for nationwide delivery so you could make your cannoli at home. Demand for these increased and we have sent them as far afield as Inverness and the Isle of Wight but with the markets and festivals cancelled, we started our home delivery service through our website and also started supplying retailers.

“As lockdown started to wind down and demand continued to rise, we decided it was finally the right time to stop working from our home kitchen and garage and set up our own premises.

“We had been looking since last April but everything was so uncertain it made sense to wait. Fortunately Ian Parker and the team at John Truslove understood the situation and didn’t put us under any pressure until we were ready.”

Cafe Cannoli has now moved into the 1,642 sq ft unit on Heming Road, with a five year lease, after conversion work to establish food preparation areas and all the facilities needed to store the ingredients for cannoli and their many fillings, from traditional, chocolate, lemon, caramel and a choice of nut varieties.

Mr Wright added: “We’re hoping for a busy summer. Our new premises are an ideal base as we keep growing and we can also now run a collections service.

“In addition, having our own premises means we can apply for a Kickstarter grant to help take on a new worker, offering an opportunity to one of the many local people who have lost their jobs over the last year.”

Ian Parker of John Truslove, said: “The property market has had to adopt to the problems of coronavirus, like everyone else. That has meant patience and understanding from all parties has been vital to ensuring a successful outcome, as in this case.

“We are delighted to see another excellent and ambitious business moving onto the Washford Industrial Estate. It is good news for our landlord client and for the wider regional economy.”