The beers that celebrate adventure 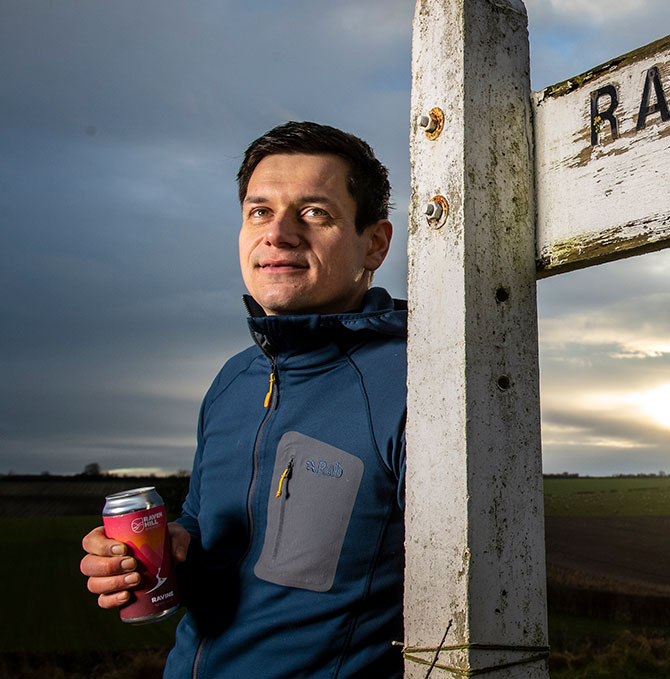 Brewing beer is a chemical process – there’s quite a bit of science behind the transformation of grain, water, yeast and hops into a delicious beverage. So a chemist launching his own brewery doesn’t seem all that much of an outlandish career switch.

This is exactly what Mark Savile of Raven Hill Brewery, near Driffield, did – but becoming a full-time brewer wasn’t remotely what he’d envisaged when he started his career, he says. He grew up on Raven Hill Farm and then studied for an MSc in chemistry at Leeds University, after which he went straight into a graduate programme in Cambridge at Syngenta, one of the world’s leading agriculture firms, which aims to use science to enhance biodiversity and transform how crops are grown. There, Mark, 35, received a good grounding in the workings of the industry, helping to launch a new multimillion-pound brand and product into the UK market.

He was promoted to area manager at Syngenta, spending a couple of years there before heading to Africa for a nine-month stint working as a project leader with the Read International charity in Tanzania. Then he returned to work in London as a business analyst for GrainCorp Malt. Malt is, of course, one of the main ingredients in beer, and it is here where Mark was first introduced to the ins and outs of the brewing industry. “My boss was the global CEO and chief commercial officer,” he tells me during our Zoom chat, “so he was really knowledgeable. I was working alongside him, doing projects and business analysis, spending a lot of time looking at new markets. And that was around the time that the whole craft beer revolution started. I also began to do a bit of home brewing then, too, learning about malts, breweries and the whole industry. It was great because I had quite free reign to delve into understanding each market.”

I do find there’s quite a lot of inverse snobbery around craft beers, and they’re often mocked for being overly expensive, having daft names and made by beardy hipsters. While there may be some truth in that, for me the craft brewing industry is just another great example of small business in action – real people working as a key part of their local communities, with creative, unique products that have an interesting history, unlike the faceless global brands. “Craft beer is more about flavour, people, how it’s made, and all those other kind of brand connections,” agrees Mark. “And I can’t grow a beard, either – a moustache is as good as it gets!”

Mark spent a couple of years in King’s Lynn as an export manager for OMEX (a specialist fertiliser company) and became a director of the local family pub, the Old Star in Kilham, before launching his own marketing and business consultancy, Savisi, in 2017, providing advice to companies in the agriculture and food industry. Then, in 2018, he launched Raven Hill Brewery at the family farm. And, far from the more typical image of beer being something to drink as you lounge around in front of the football, the inspiration for Raven Hill’s beers lies in far more active roots. Before Covid, Mark and his friends would regularly go on coast-to-coast, hiking and mountaineering challenges, as well as marathons and triathlons, usually over a long weekend, finishing up at a local pub for some well-earned refreshments. “I wanted to bring my knowledge of beer and brewing together to create some really tasty, refreshing beers – a sense of celebration after a day of adventure, that’s what we’re all about.”

Beer festivals are a huge part of any small brewery’s annual calendar and a crucial factor in spreading the word and boosting sales – but they were all wiped out by the pandemic, as were much of last year’s sales through pubs, where Raven Hill’s beers are on tap across East Yorkshire, including in York, Beverley and Hull’s Atom Bar, and even a few outlets in Leeds and Sheffield. Mark had always planned to set up a website shop, and Covid gave him the impetus he needed to get it up and running. “We didn’t have an online shop because we were only selling to businesses. Around May last year we quickly had to get a licence to do consumer sales and since then I’ve been learning more about the online side of things. Rather than going to beer festivals or popping into the local shop or bar to talk to whoever’s there, it’s all moved on to social media.” Being a one-man-band, networking with others was essential, and joining FEO (For Entrepreneurs Only) and the EYBG (East Yorkshire Business Group) put him in touch with people who could help him with marketing and e-commerce.

The competition is huge – Mark estimates that there are about 2,250 craft brewers around the UK, and if each has a range of five to 10 beers… well, you do the maths. That’s a very crowded field to try to stand out in. “There are some really good brands that people do an excellent job of marketing and have great products,” he says. “So, yes, it’s quite fierce competition. But I’ve built the brand around the outdoors and adventure, and people wanting to get out, which is a bit different, and I’ve built relationships with businesses by calling them and talking them through what our beer is about.”

Hot off the press as I write this is a relaunch of Raven Hill’s best-selling beer, Ravine, a hazy and hoppy New England IPA that packs a bit of a punch at 6.7%. It’s been given a dramatic new look to match the brewery’s new branding, and eagle-eyed drinkers will notice a kayaker has been added to the imagery, as Mark’s plan is to replicate the adventure as soon as he can in real life. The hops in this one are American – Mosaic and Amarillo, which, along with the others across the Raven Hill range, are sourced from British wholesalers.

Mark very kindly sent me a few to sample (it’s a tough job, but somebody’s gotta do it…) and I really enjoyed the Ravine – very fruity, with a soft mouthfeel, and it didn’t taste like a strong beer; a couple of these after you’ve finished your exertions and you will be most relaxed! I also enjoyed the Ascent pale ale, which comes in at 5% and is deep gold, slightly sour with a distinctive, nutty finish. The Chasm New England IPA was, in comparison, soft and mellow, and I could have sunk a few of those, but I think the 3.6% Summit session IPA is the one to choose if you want to get properly stuck in. Two new stouts are also set to be added to the range, and these should be out by the time you read this. I’ve got a bit more into stouts, porters and dark ales of late (they’re a great, comforting brew for winter), so I’ll look forward to sampling those too.

Canned beer has in the past been looked down on by beer aficionados, again perhaps not without good reason as the untreated tin used to impair the flavour quite considerably. But processes have vastly improved, and cans are in fact far better than bottles in terms of preserving the contents, as they don’t let in any light, which can degrade beer over time and give it a shorter shelf life. Mark started out bottling his beer, but soon switched to cans; they were also much lighter and easier to transport to festivals and events. I point out to him that there’s another added benefit – they don’t sound anywhere near as loud when you’re tipping all your empties into the recycling bin…

Like everyone, Mark is hoping that things can open up again soon, but January is a quiet time for the industry anyway, with the impact of Dry January and a lot of brewers and pubs almost “going into hibernation” to recover from the busy Christmas period. (I have a feeling that take-up of Dry January might have been somewhat down this year, though.) Behind the scenes it’s been anything but quiet for Mark – he’s been working flat-out to grow the business. “I was up late last night trying to draw up a plan for the year,” he says. “I think you’ve just got to take it as read that pubs and bars will open come late spring and we’ll be able to carry on. I do catch up with other entrepreneurs and business owners most weeks, but it can be quite lonely as it’s just me in the business plugging away. It’s difficult to go and see people at the moment, and when you do carry out deliveries you have to wear protective clothing and drop off as quickly as you can.”

Mark’s plans for later in the year include bringing in some brand ambassadors to further cement the “adventure” message, such as professional trail runners, hikers and action photographers. “That’s going to be really good in terms of lifting the brand mission,” he says. “And we also want to get involved in more outdoor events when we can.” So, on reflection, does his grounding in chemistry give him a keener insight into the brewing process? He hesitates, and initially says no, before changing his mind. “Well… it definitely helps to understand the science behind brewing beer. But it’s probably about 10% chemistry – and 90% washing pots!”