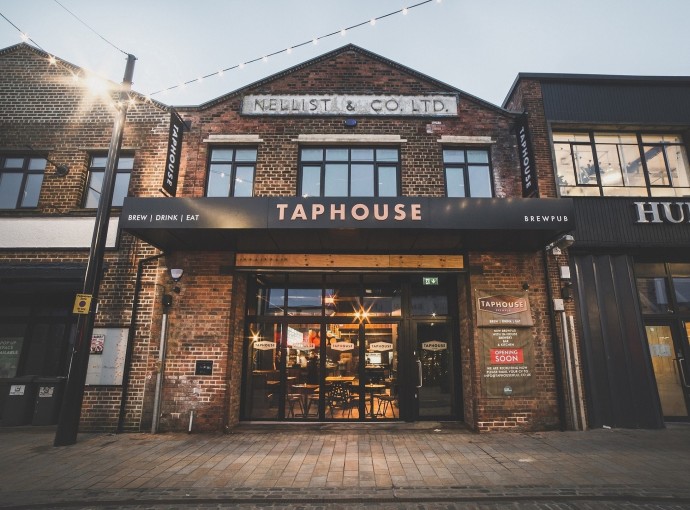 A bar and brewery offering craft beers
brewed on site and from around the world has opened in Hull’s resurgent Fruit
Market quarter.

Discerning drinkers will be able to enjoy craft
brews in a stylish space which will also host regular entertainment including
live music, comedy nights and regular tasting sessions.

The venue is East Yorkshire’s largest brewpub
and brings a new dimension to the ever-evolving Fruit Market waterside
community.

The in-house brewery is shared by Yorkshire Brewing Company,
which has been hand-crafting quality beers in the Fruit Market for more than
six years, and Bone Machine Brew Co, which sends its brews out across the UK
and into Europe.

To complement the craft brews,
Taphouse Brewpub offers hearty platters and homemade bar snacks during the week
while, at the weekend, street food operators will bring their own unique tastes
to the venue’s kitchens.

Taphouse Brewpub is owned by Yorkshire Brewing
Company’s Guy Falkingham and local licensee Lee Kirman, who have invested more
than £150,000 in a redevelopment and fit-out which has transformed another of
the Fruit Market’s former fruit and veg warehouses. The opening has created
12 full and part-time jobs.

Mr Falkingham, said: “We’re so excited to bring
our brewpub concept to the Fruit Market.

“We believe our customers will love the look, feel
and atmosphere and really enjoy having a sociable drink or two in the bar while
our brewers work in the same building.

“A selection of the beers and lagers we will
have on the bar will be brewed on the premises, while others will be sourced
from across the UK and all around the world – so it couldn’t be a more
authentic experience for fans of real ale and craft beer.

“One of the unusual features of this venue is
that it includes a fully functioning brewery, which will operate 24/7, all year
round. We’ll have the capacity to brew more than 15,000 pints a week and store
over 30,000 pints in our holding tanks at any one time, so we will always have
plenty of beers on tap.”

He said: “We love the Fruit
Market and we believe our other businesses have played a big part in its
revival.

“This new venue will give the area
another big boost. It will support the restaurants and cafés around us and generate
increased footfall for all the other independent, creative businesses that make
this such a fantastic place.

“We believe Taphouse Brewpub will become
a destination venue, adding to the ever-growing reputation of the Fruit Market
and Hull as a great place to visit and enjoy.”

The bar and brewery has a stripped-back
look with original features on display. Comfy leather-backed booths and high
tables occupy the front of the 4,000 sq ft space
with the brewing tanks on display at the rear of the building.

The venue has a welcoming, glazed
bi-fold entrance on Humber Street, with the brewery illuminated and on view
from Pier Street, making it a feature of the Fruit Market.

It has become the new home for Finnish
brothers Marko and Kimi Karjalainen who launched Bone Machine Brew Co in
Pocklington, East Yorkshire, two years ago and now distribute their distinctive
brews across the UK and to outlets in Finland, Sweden and the Netherlands.

Mr Falkingham added: “We’ve teamed up with
Bone Machine because we have a shared passion for artisan brewing. Together we
can offer a great range of brews for our in-house customers and growing number of
wholesale and retail outlets, as well as creating a fantastic brewery.

“We want to maximise the appeal of having a
working brewery and bar under the same roof. We’ll be offering brewery tours on
a regular basis so people can learn about the brewing process and taste a few
samples and there’ll be the opportunity for people to brew their own beer.

The Taphouse Brewpub is the latest new
business to join the thriving Fruit Market community, with three
more openings due within the next few weeks – fashion store Tessies; bohemian bridal boutique Ghost
Orchid Bride; and urban lifestyle gym The Temple on Humber Street.

Tom Watson, Development Surveyor for
Wykeland, speaking on behalf of Wykeland Beal, said: “It’s great that Taphouse
Brewpub has opened in a building that has been completely renovated and brought
back to life, through our extensive conservation works and Guy and Lee’s
impressive refurbishment and fit-out.

“We’re also really pleased that this
exciting, creative venture has grown out of one of the first businesses to
establish itself in the Fruit Market following the relocation of the city’s
wholesale fruit and veg trade.

“We’re passionate about supporting
local, independent business to flourish in the Fruit Market and this is another
prime example of delivering on that commitment.”