Taking Broadband out of town 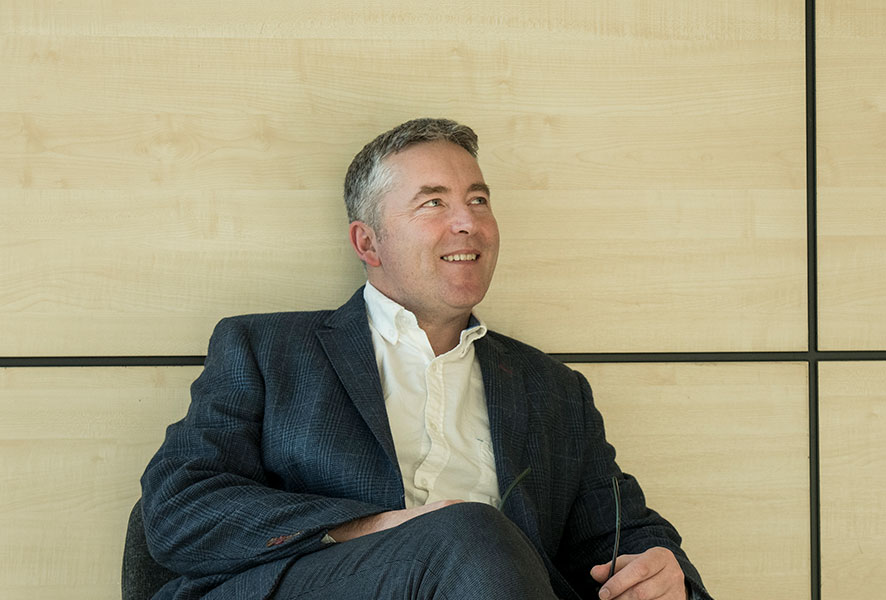 Red Peel has a memorable phrase when he considers the extraordinary rise of Worcester-based Airband over the last 18 years. “It’s like bringing water to the desert.”

Red (short for Redmond) may conjure up images more akin to Arabian Nights or even the Bible than the hi-tech world of 2020, but he clearly has a point.

No-one but the most dyed in the wool Luddite can deny that the Internet has transformed the lives of millions – indeed billions – of people across the planet over the past couple of decades or so, connecting the world in a manner unimaginable to previous generations.

You could argue that today’s generation has come to rely on the information super-highway to an alarming extent as an irreplaceable element in their lives, be it the obsession with smartphones to the remorseless white noise of social media. But that’s another issue.

Red puts it rather more simply in the hi-tech offices of Airband, a short haul from the timeless delights of Worcester Cathedral, the River Severn, the cricket ground at New Road and the area’s other time-honoured attractions. “The great thing about what we do is that people appreciate broadband.”

Co-founder and director of the wireless broadband company, the father of three was part of a website design company in south Worcester when he spotted a clear gap in the market for reliable broadband in out of town areas.

That was back in 2002 at the very beginning of the broadband revolution which would go on to change the world as remarkably – and possibly more so – as the first Industrial Revolution, the inventions of the printing press and the internal combustion engine and similarly seismic events down the centuries.

It’s fair to say that Red, who grew up in Old Hill in Sandwell, has never really looked back since, although it’s been a steep learning curve into the brave new world of cutting-edge technology.

“I could tell there was a great opportunity because BT had a lot of reluctance to upgrade the telephone exchanges to broadband and they were clearly focusing on the main city centres. But I had no idea technically how to provide an alternative service.”

Slowly but surely, Red’s vision, which would eventually lead to the launch of the business which grew into today’s Airband – the ‘superfast broadband that means business’ according to the firm’s marketing brochure – became reality.

“It was really, really slow speeds – businesses were not using cloud systems. It was really primitive. I looked into satellite broadband but it became clear it wasn’t going to be a fix-all.

“And then I came across wireless broadband, which was very big in the United States. So, I had a look at the technology they were using and what UK licensing would be involved.”

After a period of research, he found a distributor for the business who provided crucial advice  – and a first wireless broadband network was built in Redditch, just down the road from Worcester.

It took Red six months to get the first service live. “As with many new businesses, finance was a key challenge because we needed to build an infrastructure network which obviously takes a lot of money.

“At that stage, no-one was willing to invest in the networks because it was an emerging technology. It’s quite interesting though to see how that has completely changed – within the last 18 months to two years, investors have become very interested.”

Red built up the Airband wireless broadband network step by step, adding a new area every six months. In 2006, a Canadian company bought the network, and Red turned his attention to the untapped potential of South Africa.

“Websites needed faster speeds to access them and get benefits from them. We started in South Africa in 2006-07 and that was the start of the speed revolution.”

The South African adventure was to bear fruit. Red landed one of the country’s very first licences after the market was opened up to competition.

“You had a fairly low-cost base. I used to go there for two weeks every six weeks and do everything else remotely.,”

As the South African venture prospered, becoming a major regional player in Durban and attracting blue chip customers such as Deloitte and Procter and Gamble, the UK market was also rapidly developing.

The Canadian company which had bought Airband’s original networks had fallen by the wayside and in 2010 Red picked up where he had left off to cash in on the burgeoning UK market.

“I explored the market again and saw the opportunities. In the UK BT are dominant. There are few countries where a single operator is so dominant in the marketplace so it’s not an easy sector to start up in. Openreach have a reputation for being very competitive against new start-ups.

“You go to Germany and Spain and Deutsche Telekom and Telefonica are nowhere near as dominant as BT are in the UK.”

The key to Airband’s undoubted success has been its targeting of rural areas. “We are rural, our focus is rural and Openreach have never been interested in that.

“Early on, we just did business to business and business to Government. We didn’t do any consumers, following the model we did in South Africa.

“We weren’t looking to connect homes up when we first started. Then the Government changed policy and said they were going to support roll-outs in rural areas. So we had a choice to try and compete in that marketplace.,”

Airband were soon on a hi-tech roll, winning lucrative contracts across the UK. The first contract was with Hereford Council in 2020, in 2011 a £160,000 order was won with Advantage West Midlands, and a £500,000 plus contract was awarded by Worcestershire County Council followed by a £4 million contract with Devon County Council, bringing connectivity to remote areas of Dartmoor and Exmoor.

“They were stepping stones for us, each contract taking us on to a bigger contract. The innovation of what we do is really about taking lots of different bits from lots of different types of technology and mixing them together to be able to give services in rural landscapes.

“So, for example, we might have a radio transmitter using wind power because rural areas don’t necessarily have power in the right kind of areas. Or it might be using wireless to bring connectivity to a village but using fibre optic within the village to connect, which is back to front compared to how broadband networks are constructed for urban areas.

“In rural areas, there are still a lot of people who are not connected. It is more of an issue for young people if they do not have connectivity. For older people, many could happily live without it. But the younger generation will often be connected all the time.

“It will be very difficult to stay sustainable in rural areas without connectivity – it affects the value of houses.

“I think the secret of our success has been our focus on rural areas and our community engagement. Rural communities really are communities. So our focus on each community has really helped and it’s something that BT sometimes struggles with because it’s too big.”

A special moment for Red and Airband fell out of the blue in 2014 – in the shape of a phone call from an unlikely source, the big boys at BT.

“They were trying to win a contract and they realised they needed another provider to help them – they won the contract with our help and for a while they were our biggest customer.

“Winning our first tender head to head with BT was another great moment because it was one of those David and Goliath moments. To be able to persuade a Government procurement organisation not to go with BT but to go with an unheard of wireless operator – that was massive for us.”

Airband’s growth over the past decade has mirrored the remorseless rise of broadband. The firm’s extended network now spans Worcestershire, Shropshire, Herefordshire, Gloucestershire, Powys, Warwickshire, North and South Wales, Devon and Somerset. It has become recognised as a market leader in superfast wireless broadband.

Over the last two years, the company has been awarded four large projects worth £23 million, supplying broadband to a contracted 34,000 homes and businesses.

“We are doing things organically, within our own budget,” says Red. “We are getting a little bit bigger every year. We are carving a niche, it’s an ongoing process. We are now one of the bigger rural players, one of only three companies to win Government funding.

“We want to do what we do really well. We want to make sure it is profitable and has longevity. We couldn’t have predicted the wave of Government interest, when I was first selling broadband almost nobody wanted it. It wasn’t until the Netflix era that people suddenly realised the need for speed.”

That demand for speed is only likely to intensify and Airband appear well positioned to take advantage of future developments in the IT market, with a recent major recruitment drive triggered by the Covid-19 crisis.

“We have seen an increased demand for our services and as a result, Airband’s growth has qaccelerated and since lockdown started on March 21 we have made 59 hires, which bucks the national trend of recruitment drying up.

“Like many businesses, we were plunged into having to enable remote working for most of our departments and it’s a real testament to the team spirit here at Airband that we have been able to adapt so well. In fact we find that remote working is a surprisingly effective option in many instances although transitioning and keeping up communication both within departments and across the company has been a challenge.”

Red said safety had been the number one priority for Airband during the pandemic. “We have also worked tirelessly to make sure that both staff and customers are safe.

“My wife Miranda and I record a weekly video address to the whole Airband team from our home and I think it helps everyone feel a bit more connected, which is vital and it was especially important at the beginning as it was such an unsettling and uncertain time for people.

“The future is fibre, the future is 5G. We won’t be plugging our phones in with a piece of wire. The end connectivity will always be wireless but it will need the fibre-optic to provide the density of connectivity.”

Red, who says with a hard-nosed businessman’s eye that “every opportunity is also a threat” is full of praise for the team at Airband. “I’ve got some people who have been with me for a very long time and have put their heart and soul into the business.

“It’s a family-type atmosphere here. I have got people who are happy to roll out of bed at 5 in the morning and spend all night working on stuff. I am a very driven person, but I would like to think that I am always open to my staff, that I am a listener. It’s about staff being able to raise issues and talk with senior management.”

And he pays a glowing tribute to his wife Miranda and her input into the company. “She spends a lot of time looking at these issues, running an employee forum.”

Technology may be at the very heart of the Airband success story, but none of it would have been possible without the human beings on the ground helping to steer the company onwards and upwards, even during a crisis such as a global pandemic.