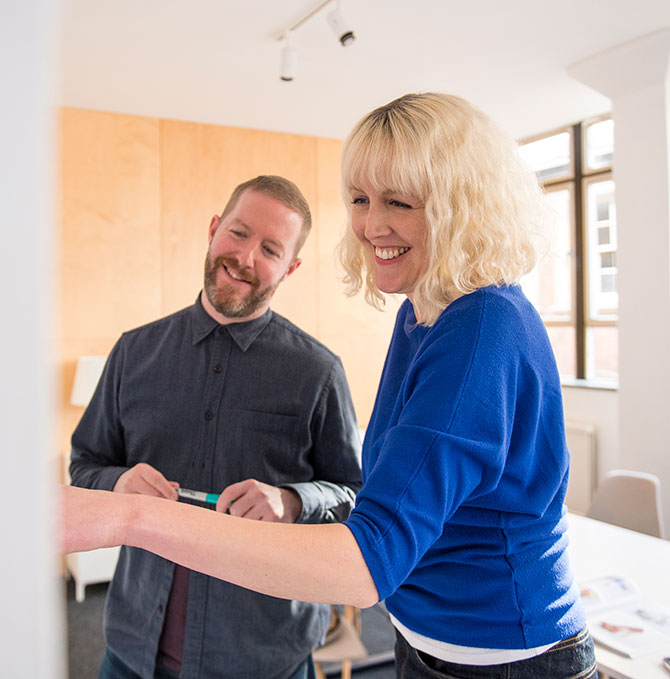 More than a decade down the line, Tim Worsley looks back on the harsh economic realities of life in London with crystal-clear recall.

“Once child care had been taken out, George was travelling all the way to Stockwell and back for £200 a week. Child care was extremely expensive, it was a bit like having two mortgages.”

Meanwhile, George (short for Georgina) puts it even more starkly. “I had two young children and I had work. But I felt that home was more important.”

The lifestyle choices facing the Worsleys more than 10 years ago reflect the classic dilemma for so many young professionals seduced by the glamour and glitz of London and then weighed against the yearning for a stable family life amid the open spaces of the countryside.

Both had high-powered jobs in graphic design in the most exciting city on earth. Tim was working with branding agency Bear after launching his career at London advertising firm Tango. “It was young guns, full bore, living the dream, going to Nike headquarters in Amsterdam. I was making really good friends, friends for life.”

George had spent nearly 10 years at upmarket specialist tea and coffee retailer Whittard of Chelsea, building and managing an in-house design team for an organisation with stores throughout the UK, USA and Japan.

“I built up a design team within that company, which was founded in 1886. I learnt and experienced the pitfalls of building a design team, and what is required to build a company.

“I did a trip to Tokyo, which was incredible, the English brand of tea was very popular. It was like going to outer space, I stood out a mile because I am 5ft 10 inches tall, blonde, the polar opposite of the Japanese.

“At Bear, they had such good times, going to parties, doing branding for events. There would be weeks in Edinburgh, Barcelona, the Cannes festival…..I didn’t get to go….no wives, really boring,” says George, a shade ruefully.

Tim recalls: “We were doing a lot of advertising that led to branding. There was a 150 metre billboard with our work for MTV in Barcelona. It was really fun, really exciting…..”

But the Worsleys, who met while studying graphic design at Northumbria University in Newcastle-on-Tyne, knew there was more to life than exotic jaunts to Tokyo and Amsterdam, garish billboards in Barcelona or a party lifestyle in the hotspots of London, however fast-paced and enjoyable. Tim had grown up in leafy Tenbury Wells in Worcestershire and later Wiltshire while George’s father had run a successful picture gallery in Cirencester. The pull of the countryside – and raising a young family away from the big city – was powerful for both of them.

Tim says: “The dream was to build a house and move to the countryside rather than live in London. We wanted to live rurally. Bear knew that I wanted to move out of London. You get to a stage where you want to make the decisions and be the guy in charge.

“As soon as I left Bear, Big Helping was born in March 2010. It was the start of us using friends and contacts that we had made over the years for recommendations.”

George, who freelanced for two years after leaving Whittard in 2009, adds: “We were in London for 12 years before we moved here. If you are a good designer, that is where you want to go. With big cities, you are much more exposed to creativity generally, theatre, fashion, music, the entire pop culture.

“There are more design agencies in London than any other city. But to enable us to move to the country, we had to decide to start our own business.

“We lived in a Victorian terrace in North-West London for 10 years. To enable us to start our own business, Tim worked for Bear in the day and in the evenings and weekends he worked on clients which would go on to become Big Helping clients.

“He couldn’t just stop and come off the payroll. It was terrifying, really frightening, absolutely relentless with the two little ones.”

More than a decade later, it’s fair to suggest that the initial terror of ditching life in London – with all its professional and personal advantages – has paid off for the Worsleys. A whirlwind existence in the smoke – not to mention those punishing child care fees – has been replaced by family life with children Martha, 14, Coco, 12 and Vernon, 10,  in a converted bungalow in rural Abberley, surrounded by the rolling Worcestershire countryside.

That rural idyll has been made possible by the 2010 launch of Big Helping, a branding, design and advertising agency which has grown into a near £400,000 turnover concern with 50 clients and a team of five based at comfortable offices in the heart of historic Worcester.

None of that would have been possible without talent, ambition and hard graft. But there’s also a clear creative rationale behind the Big Helping story, which transcends the profit motive and the treadmill existence of so much of corporate life in today’s 24-7 workplace.

Or as George points out: “The clients we work with best believe that creativity will make a difference, will add value to the brand. With some clients, they need a logo and just want it done as cheaply as possible. We do not just go “here is a logo, here is another logo”…..it is about what are you trying to say to your customers.”

Tim expands further: “They need far more than just a logo, they need to tell people what they are going to do, they need to visualise their products and services.

“Every job we do is totally bespoke, every single brand is totally different. We are not trying to cut corners in what we do. You want to see options, you want to turn over stones and see the creative process happening. We would rather be busy doing nice, creative work.”

With 50 clients on the books – from clothing companies to cufflink makers and market gardeners to estate agents – Big Helping is clearly living up to its idealistic aims across a broad spectrum of customers, which has included a lengthy high-profile spell working with the 72-club English Football League.

At the heart of it all is, of course, the married couple who dreamt of a life away from London all those years ago, and were prepared to abandon successful careers in the capital to forge a new future for themselves and their children.

So how does the Worsley marital dynamic work across so many borders, personal and professional, with Tim as Creative Director and George the Managing Director?

George says: “Tim listens to the client, talks about their business, takes all that information and distills it into the message that he is going to communicate. I do more on the finance side, HR and office stuff. The business side is something we had to learn from scratch.”