Steph McGovern at Humber Business Week: level up, be sustainable and don’t leave it to the politicians! 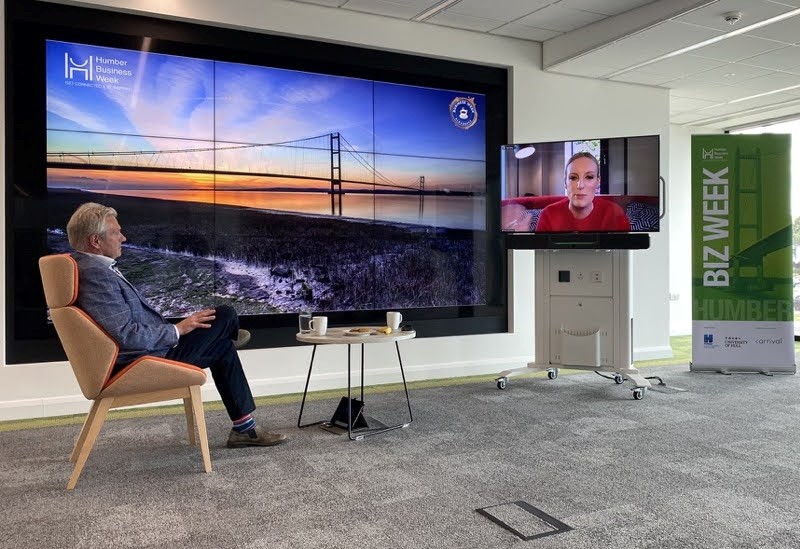 A woman who rose to fame as a business journalist with the BBC urged business leaders to step up and make a difference instead of relying on politicians to find the answers to Covid-19 and other crises.

Steph McGovern, who spent eight years with the BBC and now fronts her own Channel 4 daytime show from Leeds, also told an audience at Humber Business Week that action is needed to build business into the school curriculum.

She also noted similarities between Hull and her native Middlesbrough and called for greater recognition of efforts by business to change with the times.

She said: “It’s important not to think it’s just politicians who can make a difference because it isn’t. You guys doing business are actually making more of a difference than politicians.

“If you look at the pandemic, Brexit and the financial crisis in 2008 it’s businesses and it’s innovation and it’s everything else that drives change. Even social mobility is coming through business. It’s not coming from politicians. It’s businesses demanding more diversity and thinking more about the diversity of the people they employ.”

Middlesbrough-born Ms McGovern spoke as part of the Elevenses series of interviews by Paul Sewell, founder of Humber Business Week and chairman of Sewell Group.

She opened with the issues around launching her new show in 2020: “I was meant to launch it in April on the set in Leeds and it was meant to be the first national live show coming from Leeds and then the pandemic hit.

“I had just had a baby as well and I said I wondered if we could do it from my house because postponing it would have mean lots of people not having any work. An engineer came round and we set it up in the kitchen. I felt like I was on Big Brother and there was only one contestant!”

She went on to link the move to the need for more investment in the north: “I think that levelling up is desperately needed. There have been so few programmes made anywhere outside London and that’s ridiculous because it’s not only London people who watch it.

“It’s good that we are going to see government departments move to the north and there’s investment in areas that need it so that we don’t have those terrible statistics following us round because the only reason we have them is that there’s not been enough investment.

“There’s been private investment but there’s never been  enough public sector investment. Also transport and infrastructure. If we have good transport links it makes it much easier to do business properly although the pandemic has changed the way we view travel a bit and where we need to be to do business and that’s a good thing.”

Ms McGovern also called for a change in education, revealing that her school days prepared her for a career in engineering.

She said: “Secondary school ethos was all about getting a job. I think that was key to my success in my career because I knew what a supply chain was when I was 13 or 14 and our projects at school were linked to real projects in industry.

“I did well academically but I was better practically, the same as a lot of kids who didn’t have the structure at home to be academic but who were brilliant practically.

“I see so much brilliant ambition from businesses about what they want to do in education but they are stifled by the curriculum.

“I used to run careers events as a school governor and bring in loads of businesses. They had to sell their business to the kids and we used to do job interviews and it worked really well and some of the kids went on to do great things but I could never get it into the curriculum. They could only do it on a sports day and that ruled out all the kids who were sporty and I didn’t want to do that because what they do in sport is brilliant for so many jobs.”

As a business journalist, Ms McGovern told of her commitment to take viewers inside industry: “I wanted to show people all the different businesses in the country because I knew from working in a factory that very few people would know all the different jobs or could even name more than two of them.

“I must have visited 800 different businesses in my time and experienced so many things, flying out to oil rigs or going to New York and covering stuff on Wall Street or going to every type of factory in the UK.”

It was a role which brought her to Hull and prompted comparisons with Teesside: “I have a real soft spot for Hull. I think it’s like Teesside. There’s so much going on, there’s so many incredible entrepreneurs and so much going on round the ports and things and yet we get slagged off all the time and that does my head in when the national media don’t see what an area has.

“They just go on random statistics. The people who do the stats have often never even been to the place and they don’t know half of it. They just have assumptions.

“Hull and Teesside are similar. Industry needs to change, diversify, renew. There are people trying to do that and many doing it very successfully but I don’t think that’s acknowledged enough by the media and politicians.

“It’s really impressive to find new industries and redesign what you have been doing and create a new industry from it, especially a sustainable one. Sustainability used to be a CSR box ticking thing and now it’s bottom line. It’s really important and I think we underestimate that.”