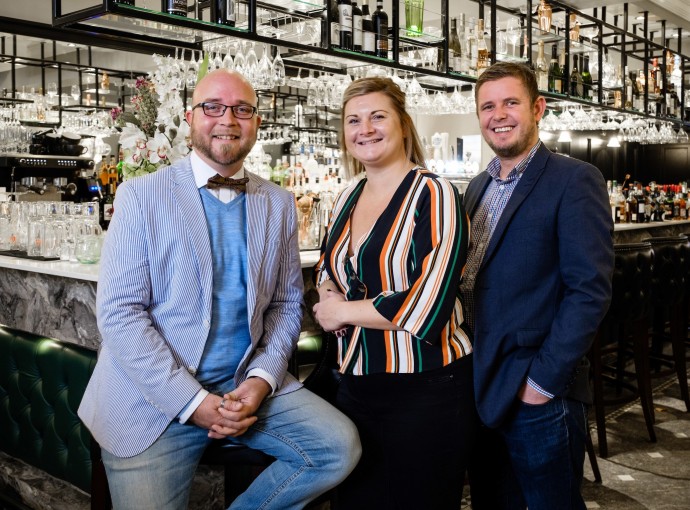 The team behind one of East Yorkshire’s most revered restaurants will launch their latest venture next month in one of the region’s new dining hot-spots.
James MacLeod-Birch, the director of the acclaimed 1884 Dock Street Kitchen in Hull, will open Steak1884 around the corner in Humber Street, in the regenerated Fruit Market area which is undergoing a transformation featuring stylish restaurants, shops, galleries and creative businesses as well as a high-quality development of 101 new homes.
James will be joined by head chef Laura Waller and deputy general manager Gary Laughton – both part of the senior management team that helped Dock Street Kitchen secure a string of regional and national restaurant awards as well as glowing reviews from national food critics.
They are working towards a public opening date of Friday, November 16, for a restaurant that is inspired by the art deco interior of the new building and by the popularity of steaks at Dock Street Kitchen.
James, who heads a team of about 12, said: “It will be different from anywhere else in the area. There are places that serve good steaks but this will be a step up. The building is in the style of a New York steak house with its green leather and touches of art deco, and it’s just the right size to really focus on service, providing an engaging experience in an intimate environment.”
The opening of Steak1884 will complete a reshuffle of the group’s businesses which began in June with the closure of Dock Street Kitchen. 1884 Marina Bar opened in those premises in August and will be joined next week by Barrow Boys, which opened in July and is relocating from the Humber Street property to offer larger-scale entertainment and a late licence.
Cucina 1884 will open in Hessle in November as a high-end Italian restaurant with a new counter service concept. 1884 Wine and Tapas Bar, which opened as the Wilson in 2010 before a revamp in 2015, continues to win accolades at the western side of Hull Marina.
Work is under way to make some alterations to the Humber Street property following the departure of Barrow Boys. The kitchen will be completely refitted and there will be some changes to the decor.
A meat locker next to the entrance will display some of the menu options sourced from Taste Tradition and the Great British Wagyu Company in Thirsk. Prime beef will be presented on a trolley for diners to select their preferred cut and thickness, before their choice is weighed, taken into the kitchen and cooked to perfection.
There will be vegetarian and seasonal pescatarian alternatives including oysters and seafood platters, plus specials such as partridge, poussin and pork chops. Steak1884 will be open for lunch and dinner from Tuesday to Saturday and will also serve traditional Sunday lunch.
James said: “We are putting in an entire new kitchen with plenty of prep space and the right grill to cook the best steaks. It will also be an oyster and chop house with a board on the wall displaying the breeds of cattle and information about the other dishes, including freshly-baked oysters.
“We are working with meat suppliers who use traditional farming and butchery methods. If they’ve got something particularly special they’ll tell us and we’ll serve it. Pricing will be very reasonable for the quality of the meat that we will be offering. It’s about creating a more interactive experience for the customers – providing information on where the meat has come from and why we have chosen a particular cut.”
The capacity of 40 plus a separate drinks area is in keeping with the compact charm of 1884 Wine and Tapas Bar and Cucina 1884.
James said: “The style will be intimate and engaging, encouraging people to take their time and enjoy the food, drink and surroundings. It’s a beautiful space and it hasn’t been open long so doesn’t need much doing to it.
“It’s a great location, especially with the residential development taking place nearby, and we want Steak1884 to be a lovely neighbourhood restaurant and a destination for our old customers from Dock Street Kitchen. It’s up to us to give them a reason to come back. As a group we are focusing on smaller, community restaurants, all different and all working together and encouraging people to try all of them.”
Steak1884 is taking bookings by email now at [email protected] and by phone from Monday, October 29, at 01482 326090.