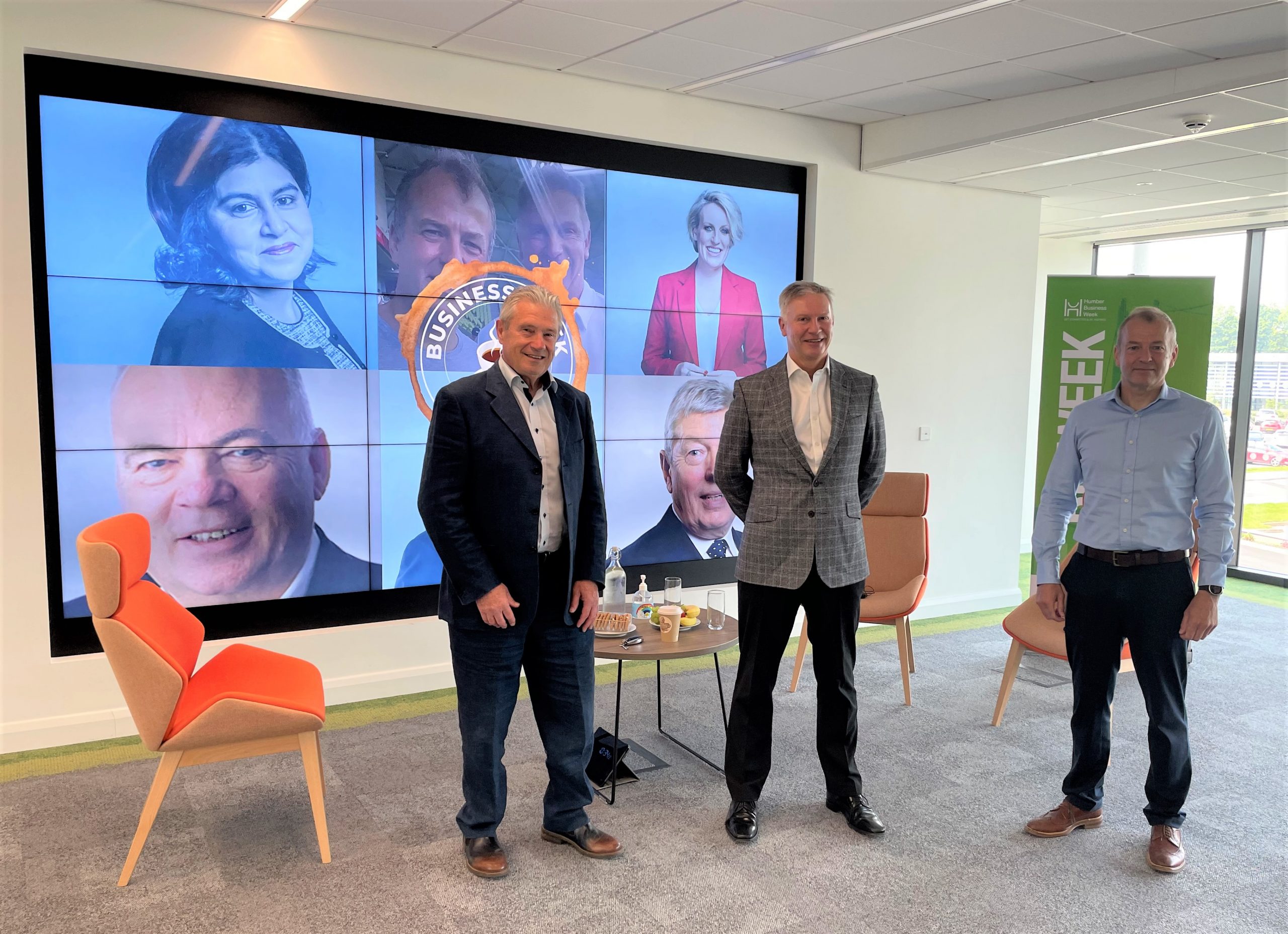 Two men who oversee one of sport’s greatest rivalries also displayed a deep friendship when they came together at Humber Business Week.

The aim of interviewer Paul Sewell was to steer clear of the detail of the sporting achievements of Hull Kingston Rovers owner Neil Hudgell and his Hull FC counterpart Adam Pearson, and focus instead on the business successes behind the rugby league.

Paul got there but not quite in the way he expected: “I wanted people to see the real them and I found out they are closer than I realised.”

The interview at the University of Hull’s Aura Innovation Centre at Bridgehead was the first in the Elevenses series which runs throughout Business Week.

Neil told of his early years growing up with his grandparents : “We didn’t really have any cash and having older-generation role models I was very insular, lacking any confidence even to the point after qualifying as a solicitor as the communication skills were pretty poor and I struggled to get my words out and I didn’t like doing advocacy.

“But I had a lot of love at home. My grandparents spent a lot of time with me, they were religious with their ethics and morality and they instilled that discipline and those morals in me.

“My grandad took me to Rovers when I was six or seven and introduced me to the secretary and I became a ball boy and ended up being chairman.”

Adam recalled working on a fruit and veg stall on Ossett market when he was 15, two years after his father lost his business during the economic problems of the 1970s.

He said: “Nobody has ever given me anything. I have worked really hard all my life and I haven’t been given silver spoons or anything.”

Neil launched his law firm on North Hull Estate and expanded rapidly when he acquired three offices from the late Max Gold, a much-loved and highly respected solicitor in Hull.

Neil said: “I admire anyone who started from base one but I started with 800 clients. It was the time, the place and the opportunity and I was on an estate where the clients were rather than in Parliament Street where all the other lawyers were.

“The estate was undergoing a major housing renovation and I was doing criminal law, matrimonial, company and a bit of personal injury. There’s always somebody who knows the law better than me but client confidence has always been the biggest thing for me. You have got to be seen to be on their side.”

Neil’s firm seized the opportunities presented by the internet to expand nationally, now with offices in London and Manchester and a leading role in representing victims of the Post Office Horizon injustice – something that resonated with Adam.

Neil said: “The postmasters started as one client. There are 700 altogether who were criminally convicted in appalling circumstances. I had one, then five, then 15 and now the best part of 200 clients and we have two people who work full-time just talking to them.

“They are ordinary people who went out to earn a living and nobody has taken responsibility for what went on there.”

Adam added: “My grandma was a postmistress and they were the pillar of the community. Neil should be very proud for looking after these people.”

Adam’s career brought him to M&S in Hull and then to London: “I was incredibly driven as a 21-year-old, getting into the office in London at 7am to be there before the boss. M&S taught me every aspect of industry from retail to buying and marketing.

“It set your standards and you never lose those them. I have become softer as I have gone on. You have to be these days, a little bit.”

He came back to Hull after completing what he maintains is still his best ever deal – buying Hull City out of administration in 2001.

He said: “When you buy different clubs your allegiance changes because your mortgage is on it. The only place it wasn’t like that was Derby County because my heart was still here. It’s a great city. It’s so self-deprecating until you criticise it.

“I didn’t know I was going to be immersed in it. In fact I am obsessed with it. When you buy a club and you own it and you have to pay the wages every week it becomes a necessity to keep the turnover coming in.

“Sport is unique because to make people happy or sad on the basis of sport is a big responsibility. The big thing is honesty – to be honest with your fans and stakeholders.”

Neil picked up on responsibility: “We had a five-minute ‘who’s not here?’ last weekend. Who has left us in the pandemic? And when you see all those faces, young and old, with sport as a release from the hard toil of week to week, it’s a huge responsibility. You go to a funeral and see the red and white flowers on the coffin, and more than anything else it’s that generational thing that makes you realise it’s a big responsibility.”

Adam said: “When I was young if I got knocked back I kept going and I always want my team to have that commitment.”

Neil responded: “The problem is it’s out of your control. Wembley in 2015 killed me. I felt absolute shame and humiliation. I’ve never watched the game again. I never watch a loss.”

Adam, supportively, added: “But it was the catalyst for coming back.”

They discussed their partnership in setting up their Tribal and Tribal II sports bars, and revealed that they are planning further joint investments this summer. And they fielded questions about parallels between sport and business.

Justin Morgan stands out for Neil: “Sometimes you don’t know what you have had until it’s been and gone. Justin Morgan was charisma personified. We probably needed some structure and longer term planning.”

Adam: “Most of my success comes from fear of failure. I am obsessed with fear of failure and sport heightens that because you are there every week. That and impostor syndrome which is something I have to live with. Probably because my father went bust when I was 13.”

Neil: “Historically my great problem has been trying to juggle Rovers and work. I took the simple solution with Rovers to throw money at it rather than fix the problem. It was a bad business decision. We have managed to stop it now but for a long time it was very uncomfortable.”

And one piece of advice?

Neil: “If you have the passion and the drive you will always succeed. You have got to do what you enjoy. You will find something that will become life-long and sustaining.”

But which club has the biggest brand?

Adam: “Over the past couple of years winning the cup gave us a national profile but I think both clubs are positive now – financially stable and competitive in what is a difficult sport.”

Neil: “I grew up at a time when both clubs were at the pinnacle of the game. We fed off each other. In terms of brand you look at Australia over the decades and Hull KR has a massive brand over there but the two help each other. If one wasn’t here the other would struggle.”