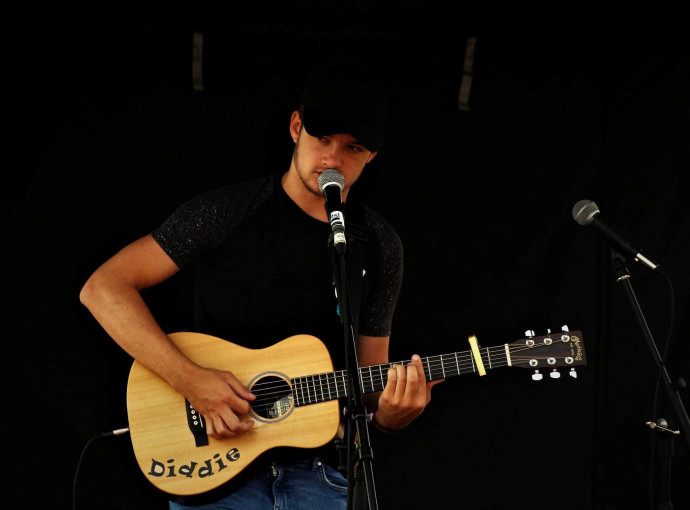 Andrew “Diddie” Hair is hard at work studying music at Hull College and finishing his first EP – but the recording might have to wait as he copes with a packed calendar of live gigs.
Diddie, who doesn’t turn 19 until next week, will make his third appearance at 1884 Wine & Tapas Bar at Hull Marina tomorrow (October 11) as the award-winning restaurant begins a programme of celebrations to mark its 10th year in business.
Diners and staff are looking forward to seeing the progress made by the talented teenager who first plugged in his guitar at the restaurant at a rioja night a year ago and followed that with a Boxing Day performance to remember.
Deborah Spicer, director of 1884 Wine & Tapas Bar, said: “It’s scary to think Diddie was only 17 when he played his first show here after we spotted him at an open mic night and decided to give him a chance.
“Even in the few months to Boxing Day he had matured and we’re expecting him to be even better this time round because we know how hard he’s been working and how much more experience he has gained.”
Diddie lives at Bilton Grange and went to the Marvell College before progressing to Hull College, where he has been studying music for two years and specialising in guitar, piano and vocals.
He is building a strong following with performances at bars and restaurants around the Hull area and also featured in this year’s Humber Street Sesh and Tribfest events. Cover versions include songs by Ed Sheeran, Kings of Leon, Queen and U2 and Diddie is also building his own catalogue of compositions with a style which is hard to pigeonhole but which is definitely pop rather than rock, and with leanings towards country and Americana.
His immediate ambition is to save up to buy a portable piano so he can add more variety to his show, and he’s also working towards that album release.
He said: “I got into music when I was about four, sitting on my dad’s knee and watching Elton John on the computer. I’ve been playing guitar for three years and never had a lesson and I’ve improved my piano to grade 5. I use a looper pedal for my live shows, playing everything myself, and I’ll be playing everything on the EP except the drums.
“I’m putting the finishing touches to the album now and looking for the right venue for a release gig. I play at quite a few different places and I always love playing at 1884 Wine & Tapas Bar – great atmosphere, great staff and great food. I’m looking forward to playing some of my own music to help them start the celebration of 10 years.”