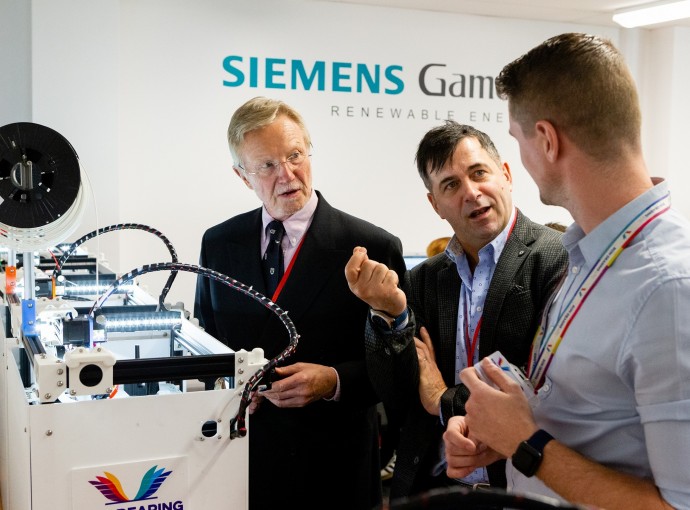 Professor Juergen Maier made the comments during a visit to Ron Dearing University Technical College (UTC) in Hull.
The employer-led school specialises in digital technology and engineering skills and is one of the UK’s most successful UTCs. Siemens Gamesa, which has a world-class offshore wind turbine blade factory in Hull, is among Ron Dearing UTC’s Founding Partners who established the school to provide a pipeline of young people with advanced digital and engineering skills for companies such as Siemens.
During a VIP visit to the school with Alan Wood, former Siemens UK chief executive and chairman, and Finbarr Dowling, Siemens Mobility UK director of localisation, Prof Maier took part in a question and answer session with a group of students in Year 10 (aged 14 and 15).
Prof Maier, who led an independent review of how UK manufacturing could be transformed by digital technology, which resulted in the Made Smarter report, was asked whether the industrial revolution driven by technology would lead to an overall loss of jobs.
He said: “Our conclusion in the Made Smarter report was that, without question, it will increase employment in the UK, if we get it right.
“That means we need to make sure that existing manufacturing and engineering applies technologies such as virtual reality and additive manufacturing a faster pace.
“That’s an opportunity for people like you with the skills you gain here to help companies get better at adopting these technologies, in order to become more productive, efficient and competitive. Efficiency and competitiveness will ultimately create more employment.
“Secondly, while some jobs will be displaced, the other way you make those jobs up is by creating the companies in the UK that develop the new technologies.
“That’s about companies doing things such manufacturing virtual reality glasses or writing the software that sits behind them, or writing the code for machine learning or artificial intelligence. The amount of jobs that will appear in that whole space will be huge.”
Mr Wood also told the students they had exciting futures ahead of them and he had no fear that technology would destroy jobs.
He said: “We’ve learned over the past 200 years that, as each wave of technology is introduced, it doesn’t mean 90% of the population is sitting around doing nothing. They naturally find other things to do.
“That means the whole of society becomes wealthier, more demand is created and the whole thing grows. That will continue into the future.”
Ron Dearing UTC has a strong focus on encouraging girls to study towards careers in digital technology and engineering. Currently, 20% of the school’s students are girls, with a long-term aim to raise this to 50%.
Prof Maier stressed the need for manufacturing and engineering companies to broaden their appeal and achieve greater gender balance.
He said: “At Siemens we’re a little bit better than the national average. About 14% of our engineering staff are women, compared to around 9% nationally.
“But we are starting to see the trend changing at entry level – people joining us for apprenticeships and our graduate schemes. That’s about 120 to 150 people each year and last year 25% of them were women.”
He told the students there was a pressing need to extend the appeal of engineering and technical careers, especially in the post-Brexit era when it would be harder to fill skills gaps through immigration.
He said employers needed to reach out to women, ethnic minorities and the LGBT community, and added: “All the evidence shows the more diverse your teams are, the better your outcomes will be … the better your innovation, the better your ideas are going to be.
“Businesses benefit from the diversity of thought you get from much more inclusive teams. We see that in Siemens in spades.
“If you put people together from different backgrounds, people think differently and you get better outcomes and I’m sure you see that in your teamwork here.”
Prof Maier said the need for diversity and inclusivity was heightened by the ever-increasing prevalence of technologies such as artificial intelligence.
He added: “If you get a largely white, male group of computer scientists programming the intelligence into artificial intelligence systems you’re actually building bias into the decision making, based on that part of the population.
“So it’s very important you make sure these technologies involve people from all backgrounds so that the algorithms and decision making that will happen in more automated ways is representative of the population at large, rather than just one part of it.”
The visit to Ron Dearing UTC followed a tour of Siemens Gamesa’s wind turbine blade factory in Hull and Prof Maier said the investment in the city had been one of the best projects he had been involved in.
He recalled first visiting the Alexandra Dock site five years ago when it was an “industrial wasteland”. Now it had become “a centre of world competence” in wind turbine manufacturing, assembly and logistics.
“To have that vision five years ago and come back today and walk around that factory creates a feeling of huge pride,” he added. “It’s been brilliant to have been a part of it”.
During their visit, Prof Maier, Mr Wood and Mr Dowling had lunch with sixth form students and senior staff and were given of the £10m school, led by vice-principal Steve Willacy.
Ron Dearing UTC principal Sarah Pashley said: “It was privilege for us to host Juergen, Alan and Finbarr and a fantastic opportunity for our students to meet and learn from them.
“Siemens has played such an important part in inspiring, establishing and supporting the school, so we were delighted to be able to showcase what we do here to our visitors and, most importantly, introduce them to our amazingly talented students.”