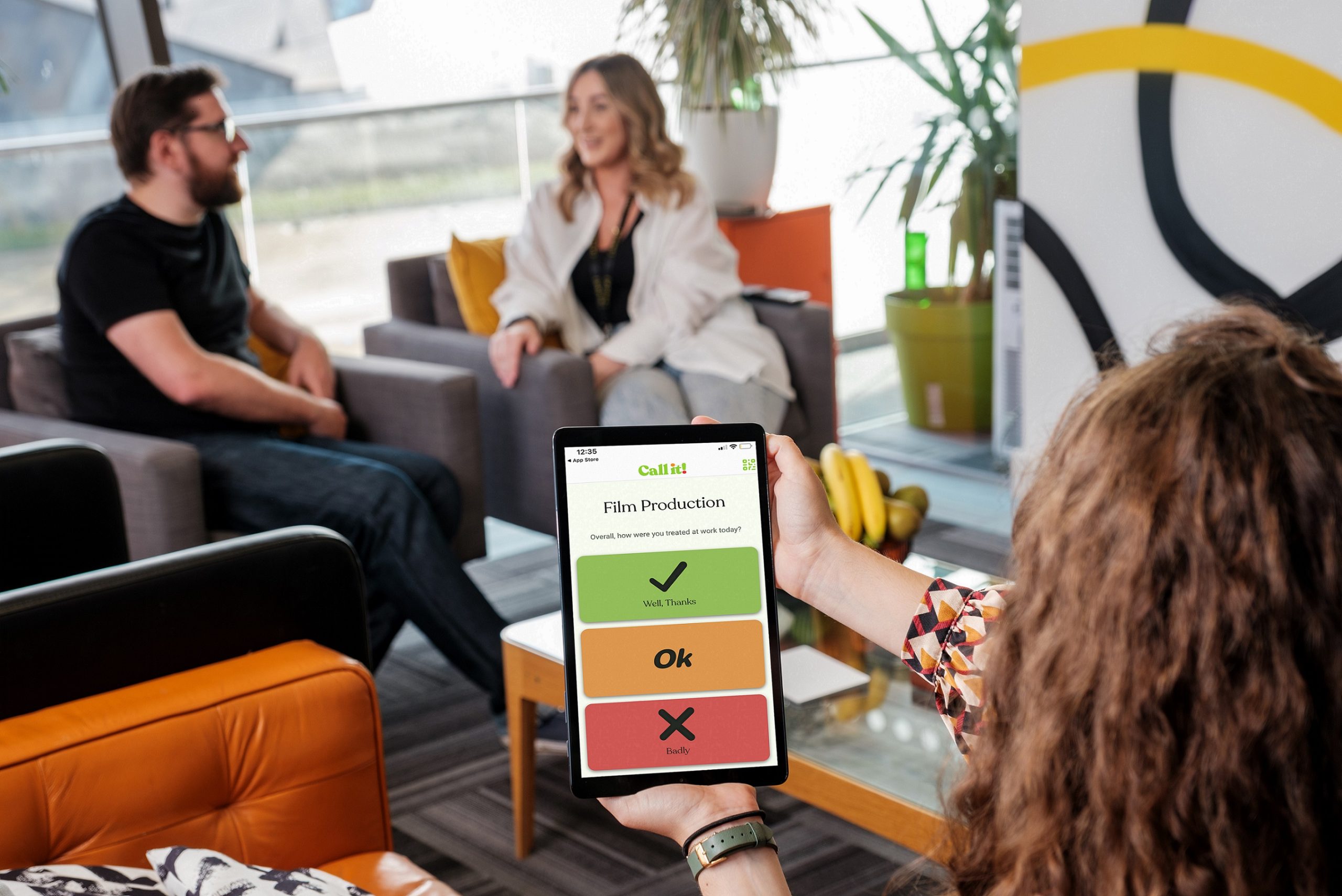 Smart tech firm Sauce has developed an innovative app to tackle workplace bullying and discrimination across the television and film industry.

The award-winning business is working collaboratively with leading figures in the industry on the project, which aims to empower and enable people at all levels to record incidents quickly and anonymously.

The Call It! app will allow companies and productions to monitor the safety and wellbeing of their staff and raise any issues of bullying, harassment and discrimination for them to address.

It is the brainchild of director Delyth Thomas and producers Jules Hussey and Kate Wilson, following increased awareness of abuse in the industry prompted by the #MeToo movement and the Time’s Up campaign, which is supporting the project.

Sauce has developed the Call It! app for users to be able to provide anonymous feedback on their day-to-day treatment at work using a simple traffic light system and by noting any incidents of bullying, harassment or discrimination.

Companies set up an account to create a QR code for their project, providing links to their Dignity at Work policies and procedures and the name and email address of an appropriate point of contact to raise any issues in confidence.

The app does not hold any identifying information about the user and their feedback cannot be traced back to them. In the event of any mistreatment, they are signposted to advisory and support services, including the UK arm of the Time’s Up campaign.

Authorised users at the company or production using the app are able to access a web-based dashboard to review the anonymised data, so they can identify any issues raised and intervene to mitigate the risk of workers being mistreated.

The system will also reduce the risk of productions being cancelled further down the line, if serious issues are discovered later, at significant cost to the company.

Working collaboratively and flexibly with Delyth, Jules and Kate, Hull-based Sauce provided a full service by creating the software and leading the UX (user experience) design process for the app and the web-based dashboard.

Matt Weldon, managing director of Sauce, said: “We’re proud and delighted to work on this innovative project to help tackle such an important issue.

“Delyth, Jules and Kate are all passionate about this and we’ve worked closely with them to deliver their vision, using our digital expertise.

“Anonymity is absolutely key to this project because it’s such a sensitive subject, so a great deal of effort has gone into making sure the checks and balances are in place to ensure it’s completely anonymous, both for the safety of the user and to gain the trust of the industry.”

The app is currently in the pilot and testing phase with a select number of productions and organisations. It is intended to be rolled out industry-wide later this year.

Twice Bafta-nominated Delyth, director of hit television series such as Silent Witness, Vera and Victoria, said: “Bullying and harassment can manifest in so many ways – from public humiliation to the smaller daily things that chip away and chip away.

“There are great industry resources in place and yet reporting is still extremely difficult because sometimes it’s an accumulation of small things that’s just too much.

“Even on great shows with lovely people, things can happen, and we wanted to ensure that every single person at every stage of production has a voice, is heard, and knows where to go for help.”

Companies using the app will be asked to share the completely anonymous and confidential data with the Sir Lenny Henry Centre for Media Diversity at Birmingham City University, with a view to identifying patterns and trends to help improve working conditions across the industry.

Kate, who has worked with industry leaders including Hollywood actor, director and producer Jodie Foster, and American film director, producer and screenwriter Paul Thomas Anderson, and founded Fury Films, said: “Our deceptively simple app is a powerful tool that can catalyse cultural change and improve working conditions in our amazing industry.

“Our industry can and should be the very best place to work and thrive and Call It! can help us get there.

“We want everyone in the industry to work with us to make sure the app does what we intend it to do.”

Numerous other industry organisations are collaborating with the team behind Call It!, including the Casting Guild, Directors UK, Bectu (the Broadcasting, Entertainment, Communications and Theatre Union), the Film and TV Charity, the Production Guild, the Mark Milsome Foundation, Sara Putt Associates and the Writers Guild of Great Britain.

Jules, who has produced television shows such as Guilt, Babs and My Mad Fat Diary, said: “Our industry will only see substantial change if we enable everyone, at every level and at any time, to feel safe feeding back how they are being treated.

“We also need to acknowledge best practice, as well as calling out poor treatment and discrimination.

“Call It! is a tool which can be in the hand of everyone involved, from development to distribution, and empower them to say ‘thank you, I’m being treated well’ or ‘something is wrong and I need help’.”

The app has been developed initially for the television and film industry, but has also been created in such a way that it can be adapted for other sectors in the future. Other markets already identified include the theatre, the arts and gaming.

Sauce, based at Hull’s Centre for Digital Innovation (C4DI) tech hub, has established a strong reputation for enabling businesses and other organisations to achieve their objectives through technology solutions.

The team works as co-collaborators with is clients, including Nestlé, Siemens Gamesa, RB, Rix and Ideal Heating, among others, becoming their long-term digital partner.