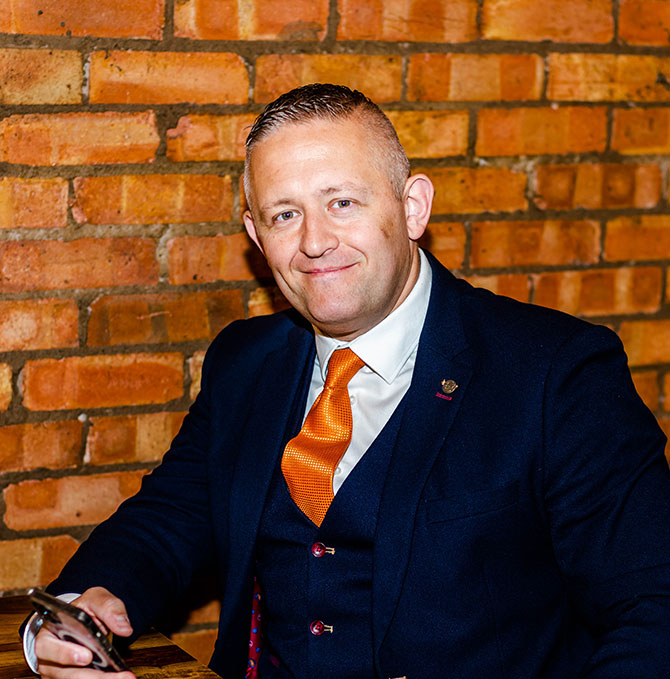 He’s at the very cutting edge of crowd safety management, an international market leader and prominent figure worldwide in moves to prevent another Hillsborough or Bradford disaster and the loss of dozens of innocent lives.

Andy Hollinson has worked with the likes of the Football Association, Network Rail, Arsenal FC and many other household names to ensure safety is a paramount concern at major sporting and cultural events.

One of only 40 people worldwide to gain a First-class Honours Degree in Crowd Safety Management, Andy is the driving force behind five companies based in the evocative setting of the former Redditch County Court offices.

But intriguingly Andy’s self-confessed passion for crowd safety was triggered by a near disaster back in 2008 when he was running a security company in Maidstone, Kent, called Response Security Solutions.

Sitting in his office in Redditch, Andy recalls: “I set the security company up in 1997. I ran it for 20 years, we had a few bumps along the way but it was on the whole a reasonably decent company. It started off providing security guards and door staff for nightclubs

“We didn’t get too big but it grew and did alright and kept us going for a number of years, and during that time I developed a bit of a passion for large-scale crowds, managing security and safety at large events, music events, festivals.”

But the world of security has traditionally always been a volatile sector – and Andy was to learn an invaluable life lesson at an ill-fated music festival starring the likes of Mark Ronson at Port Lympne in Kent.

“I was young and cocky and thought I knew it all. We had done all these events at Leeds Castle (also in Kent) and they had always gone swimmingly. I was asked to go and work to manage the safety and security at a festival in a zoo.

“Anything that could go wrong pretty much went wrong, other than anybody being hurt. There were tickets for 10,000 people and they estimated that 20,000 people arrived on day one. Tickets had been stolen and copied, people turned up with fake tickets, it was overcrowded, there wasn’t enough staff to manage it.

Andy may not have known it at the time but the chaotic scenes at that Kent music festival back in 2008 proved a turning point in a career which has taken him to a string of major worldwide events, utilising his expertise in crowd safety management.

As he recalls: “That pushed me back into education so I went to Buckinghamshire University in High Wycombe to do a Foundation Degree in crowd safety management which is a very, very niche subject. There are probably around 150 people in the world with that qualification still to this day.

“I studied that for two years and it was there that I met my mentor, a guy called Mick Upton. He was really credited with starting the crowd safety industry, he was the original founder of one of the biggest security companies (ShowSec International). He was bodyguard to the Hollies, he was in charge of Live Aid at the old Wembley Stadium, he took all his knowledge from over the years and helped to write the Foundation Degree.

“When I started he became my mentor very quickly. He guided me through university and I learnt a lot from him. His company, ShowSec International, used to do some of the biggest gigs, Wembley etc, the festivals, they are still going today.

“He pushed me through university and really sparked my passion even more for keeping large crowds safe and moving. All his knowledge was put into the degree programme by the academics and he would be the lead on the course.

“It was very much his passion – as it is mine – to avoid the likes of Hillsborough happening again, or the Bradford fire or Ibrox.”

Today, years on from his mid-life university studies, Andy can reflect on a burgeoning business career which has seen him as spearhead and owner of five companies within the Square Metre Group, encompassing crowd safety management, police security, marketing and website design and other initiatives.

But the father of five, who lives in Redditch, admits that crowd safety remains top of his various business passions.

“It’s like a challenge. We have seen the negative press around the world of thousands of people dying at events. People should not go to events to enjoy themselves and then not come home to their families.

“Because of these kind of incidents in the UK we are actually quite good at managing crowds and keeping them safe. There are countries all around the world now which are where we were back then, and the same thing is happening in those countries, because there is no education.

“Years before the likes of Hillsborough, there was no education in safe management of crowds and keeping people safe to prevent the likes of Hillsborough, there was no real training for stewards. They used to rock up and have a pie and a pint, watch the game and they would be happy, until the Bradford fire happened, and then they realized there were a lot of liabilities involved.”

Andy said the introduction of the Corporate Manslaughter and Homicide Act in 2007 had led to recognition that a more formal style of training and education was required to prevent repeats of the horrors of Hillsborough and Bradford.

“The Corporate Manslaughter and Homicide Act is across industry, it’s not just crowd safety, it is across law in general but because of that law and holding people accountable, there had to be lots of changes in keeping people safe and planning and all sorts of things. If something goes wrong you are on a corporate manslaughter charge and you need to have covered your backside.

“I went to university for a second time, I was 33 when I graduated. At that point I had had enough of providing manpower. I had had enough of excuses of why everyone was ill on a Saturday night and couldn’t work in a nightclub, why the cat always died on a Saturday night – there were all these excuses why staff couldn’t come in. It was just hard work for very little reward.”

Andy’s career path took an ultimately life-changing twist when he took on work with a recruitment and training company in Redditch, project managing crowd safety training for stewards, setting up an arm under the Crowd Safety Training banner.

“It became global very quickly, we ended up with an office in Australia, delivering training to some major sports grounds, just through my network of contacts.

“To be completely candid, we had killed a lot of people at UK events and the world really wants to learn from the UK, because we are pretty good at not doing it today, I am glad to say.

“We delivered training across Australia, New Zealand, we ended up providing training for the Commonwealth Games in 2018, on the Gold Coast of Australia.

“We have trained the police, local government, the venue managers for the Commonwealth Games, the emergency services, Queensland Police  – we went to Qatar to deliver training to the delivery committee for the Qatar World Cup.”

Andy’s career took on another trajectory in 2017 when he branched out on his own with the Crowd Safety Training brand. Five years on, he is able to reflect on half a decade of success.

“We are pretty much the market leader in the world. I guess we were the first. It’s a bit like McDonald’s. You get there first and other people might try and copy you. We went off on our own as Square Metre but with Crowd Safety Training as a training style underneath it.”

Today Andy is juggling five companies from the former County Court building in Redditch – whilst enjoying his globetrotting role as a leading ambassador for crowd safety.

“For a small company, our client list is pretty big with some big names. We deal with the FA, Network Rail, social housing groups, county councils, football clubs such as Arsenal and Oxford United.”

Clearly not a man to rest on his laurels, Andy has further global ambitions for his Redditch-based group. “The rest of the world is our future customer base. We work with the South Korean Government, we work in the Middle East, last year we trained 200 managers at Expo Dubai, which attracted over 24 million visitors over six months.

“I delivered a lot of that programme and this year we have got bookings across the UK – we deliver it online. We have just been booked to go to Saudi Arabia in July and October, Qatar in October, Australia in August, so the whole world is our playground.”

And not content with spreading his crowd safety message worldwide, Andy has even branched out into the world of magazines. “I was driving along one day and listening to Richard Branson’s audio book and he was talking about how his very first business was setting up a magazine.

“A few months later, we published edition one of The Crowd. It very quickly grew and we are in countries around the world. We don’t do it in print abroad. It is all on an App.

“It is the only international crowd safety magazine, the only press for the industry.”

Andy’s ambitions are even stretching as far as the final frontier – as he enthusiastically explains.

“It’s a little bit of a wacky one that people always laugh at when I say it. Spaceports are being built in Cornwall, the Orkneys and in other countries around the world.

“So, who knows how to manage crowds at the very first passenger flights to space, for example, which aren’t a million miles away? There is going to be a different dynamic because there is a certain distance you have to be away from the launch pad, different considerations around hearing protection, where crowds can stand, so it is another specialism in the future that we can learn to be part of.

“I might give Elon Musk or Richard Branson a shout to see if we can help them to work that out.”

Given his recent business track record, Musk or Branson may well be well advised to take Andy Hollinson’s advice