Rollits rewards four of its team with promotions 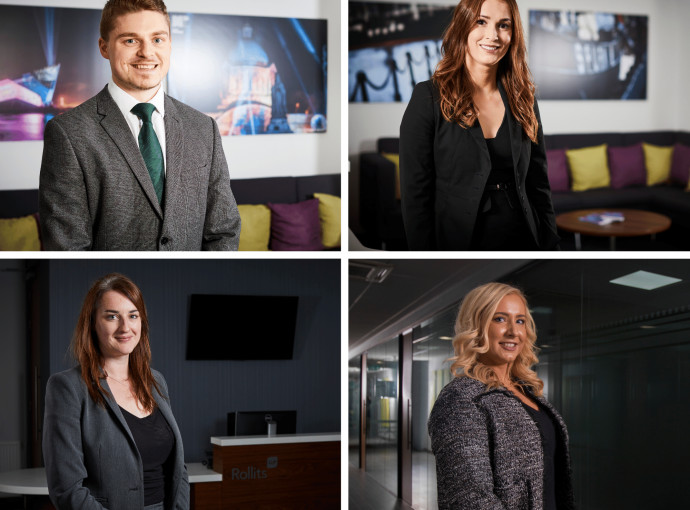 Gareth Orriss and Sophie Wheeldon, who both deal with all aspects of commercial property work, are promoted from senior solicitor to associate.
Emma Fawke, a solicitor in the firm’s private capital team, and Donna Ashbridge, a solicitor in the corporate department, are both promoted to senior solicitor.
Sophie and Gareth both gained First Class Honours degrees from the University of Hull. Sophie joined Rollits as a trainee in 2013 and qualified as a commercial property lawyer in September 2015. Gareth completed his training contract at another firm in the area and joined Rollits soon after qualifying in January 2016. In 2019 Gareth was recognised in the Hull and Humber Top 30 Under 30 list.
Sophie and Gareth work closely with colleagues Chris Crystal, Neil Franklin, David Hextall and Glenn Craft in the firm’s highly respected commercial property team on matters including acquisitions and disposals, landlord and tenant, leasehold and freehold, secured lending and corporate support work.
Donna joined Rollits as a trainee solicitor in 2015 and moved to work in the firm’s corporate team when she qualified. During her training contract, Donna spent three months on secondment to Hull 2017 City of Culture, where she gained experience drafting a variety of different commercial agreements specific to the culture and creative arts sector. She now works on a variety of corporate matters including company formations, mergers and acquisitions and banking matters. Donna also works on partnership matters, share buy-backs and re-organisations and is part of the firm’s education team, advising on a variety of corporate issues for clients in the sector.
Emma entered the legal sector more than 12 years ago and worked for several local firms before joining Rollits in 2018. She now specialises in wills, estate planning and administration matters, as well as lasting powers of attorney.
Ralph Gilbert, managing partner at Rollits said: “I would like to congratulate Gareth, Sophie, Donna and Emma on their promotions. We have always strived to create a place of opportunity within Rollits in order to nurture, recruit and retain the region’s very best talent in the hope they will enjoy a long and rewarding career with us.
“These promotions are all thoroughly well deserved as they have all proved themselves to be very capable and focused on achieving the best possible results for clients in the work that they undertake.”
The picture above shows (clockwise from left) Gareth Orriss, Sophie Wheeldon, Donna Ashbridge and Emma Fawke.