Riding with mates on a cycling trek of a lifetime 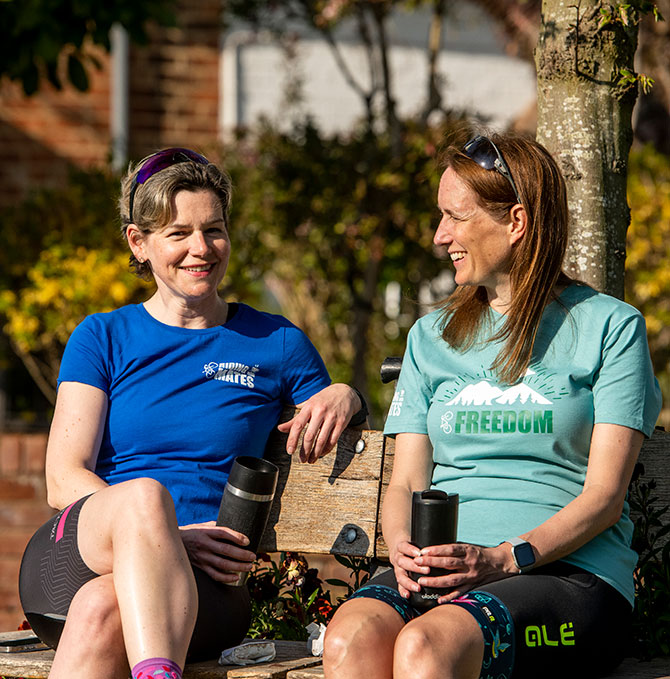 Jenny Price and Sarah Watmore are – in the nicest possible way – something of a double act. Firm friends and business colleagues, they are both huge cycling fans as well as determined characters who dug themselves out of lockdown with a niche enterprise which revolves around their love of life on two wheels.

It all began back in the summer of 2019 when the pair signed up for a cycling endurance test of a lifetime – a week-long trip to the mountainous Pyrenees scaling picturesque peaks in sweltering conditions.

But their subsequent business venture might never have happened without the onset of lockdown in the wake of the global pandemic – while Jenny admits she almost turned her back on the mountainous adventure which would eventually inspire the pair to set up cyclists clothing company Riding With Mates.

In a bustling cafe in genteel Droitwich Spa – far removed from the rugged peaks of the Pyrenees –  the Worcestershire-based pair of cycling entrepreneurs talk through the cycling escapade which would give birth to Riding With Mates and add another string to their business CV bows.

Sarah takes up the story. “We both did indoor riding on an online cycling and running platform called Zwift, which enables you to ride with people from all the world. What with young kids and bad weather Zwift proved a way of keeping cycling training going. We had been doing that for a few years and eventually we started meeting up in person.”

Jenny adds: “Sarah signed up for this trip to ride through the Pyrenees from Toulouse to Barcelona. It was the summer of 2019 – she mentioned it to me and said: “You should do this.” We had to do loads of training as you are tackling three or four mountains a day.

“There were around 25 people on the trip in total. We had both done trips to Majorca and France before. But for this one I had a bit of a meltdown before going – I was panicking about the enormity of it.

“Even though I had done all the training I was having a bit of a panic before going and my husband Gareth decided to give me a bit of a pep talk. He said: “Why don’t you just look on it as a trip riding with mates?” His advice – and the phrase Riding With Mates – proved to be the catalyst for a new business venture which would – to coin a phrase – eventually hit the ground running in the depths of lockdown around 18 months later.

Sarah recalls: “Training for the Pyrenees was 12 hours a week. It was like nothing I had ever done before – and at no point did I feel fully prepared.”

But there were also memorable advantages to the gruelling mountain trek, as Jenny remembers. “The scenery was absolutely stunning. The places we got to go to you would never normally see.”

Sarah adds: “We were cycling 100 miles a day. We were really lucky with the weather – in Spain it was hitting 40 degrees.”

Says Jenny: “There were moments of sheer joy when you could stop and admire the scenery but some of the mountains could take three or four hours to ascend. It was three different peaks a day, up to over 2,100 metres.”

Sarah describes the cycling adventure as a ‘fantastic experience.’ “Although everybody hits their low times at different points, because you just get so exhausted. We are both determined people. If you were really struggling there were support people to help you out but we managed to get through the whole thing without that.”

Says Jenny: “There were several people who really didn’t think we could do it, but that actually spurred us on.” The intrepid duo returned from the Pyrenees happy in the knowledge that they had successfully tackled the most gruelling cycling trip of their lives to date – and with a germ of a business idea, albeit yet to see the light of day at that stage. The idea for Riding With Mates would eventually arise from sad circumstances…..

“Sarah and I were on a long car journey to a funeral. It was for a friend from Manchester, David Roberts, who had been on the trip to the Pyrenees. Sadly, he had died aged just 53. He had an underlying heart condition.

“We had met him on the trip. He cycled with us a lot. It was the sort of trip where you forge strong bonds. We stayed in touch with him and would sometimes ride with him on Zwift .

“We were on the way to the funeral and Sarah said to me: “I have been thinking about Riding With Mates. There is something about that phrase, I think we can do something with it. I think it will go really well with casual clothing.”

The Pyrenees may have been the inspiration for the company which would become a niche clothing firm for the enterprising duo – but the trials and tribulations of lockdown would eventually provide an unforeseen opportunity to launch the venture.

In common with millions of others, Jenny and Sarah had seen their livelihoods plunged into jeopardy by the UK’s worst medical emergency in 100 years. Both were looking for new ideas to boost their precarious bank balances.

As Jenny explains: “I work with the NHS as a service improvement facilitator, coaching teams. When lockdown started, everything was cancelled and there was a period of time when no work was coming in.”

Meanwhile Sarah was facing similar difficulties with her own ‘day job’ – and her primary source of income, jewellery and fashion accessories wholesaler and retailer Miss Milly.

Established in 2012 and offering stylish rings, bracelets, necklaces, earrings and the like for online sale, the business had prospered over the years and was on the verge of its best year to date.

Sarah says: “The company has been running for nine years and has provided me with a good living. I make the jewellery as affordable as I can for everybody. I design the jewellery and it gets made in China. I have around 150 customers, gift shops, garden centres, clothing shops, concessions etc, all over the UK.

“But lockdown was horrendous for me because all my customers shut up shop. It was a testing time, I did not qualify for Government support and there was only me earning in the house, whilst trying to cope with home schooling at the same time.”

Says Jenny: “Lockdown gave us the headspace and opportunity for Riding With Mates. A lot of background work had to be done.”

Sarah explained: “We started this business with £150 each to pay for the design and the logo. We could see what something should be like and draw it on paper but we couldn’t translate it into actual garments.”

But salvation was at hand with graphic designer Alison Keys – another cycling fan. “Alison came up with the design and the logos – we couldn’t have started it without her.”

Riding With Mateshttps://www.ridingwithmates.com/ – described as ‘carefully sourced and lovingly designed ethical off the bike clothing and accessories’ – was up and running, launched in the bleak days of January 2021 lockdown.

Says Sarah: “We wanted to pick something fairly niche. We do things like t-shirts and beanies, hoodies. We source the clothes from a national company, and it’s all sold online. We do team clothing and that brought in international customers, as well as national customers. We are shipping clothes to Canada and the USA, and to Europe.”

Jenny adds: “Hoodies are the most popular, they are warm and comfortable, especially with the summer we have had. There are 10 products, all the garments are available in a variety of colours. Because of where we both were financially – not getting an income – we needed to launch in a low key way without investing in a load of stock which we didn’t know if we would be able to sell.

“We set up the website and set ourselves up on Instagram, Facebook, Twitter etc. The response has been very good right from the start. We had 10 to 12 individual orders in the first month, some were friends and family. We had a bulk order from the Zwift virtual cycling team, 35 orders for hoodies and t-shirts, that is the biggest order so far.

“We want to get established and get our systems working really well so that we can scale up as and when required.”

Separate from Riding With Mates, Jenny saw another gap in the market during lockdown and launched SportyBakes, providing flapjacks, cake bars and energy bars for cyclists. “When I got really deeply into cycling and needed to eat during riding, I was really struggling. Some of the bars available were really hard to chew.

“I came up with my own recipes and bake them myself.  My best seller is lemon drizzle flapjack. All the ingredients are natural, they are made from butter, sugar and oats. There are no chemicals involved.”

Meanwhile, Jenny is also throwing her energies into Riding With Mates, in tandem with Sarah, who said: “The hardest bit is the stage we are at now, marketing the business, trying to attract attention and get sales from people we do not know.

“We are getting 10 to 12 orders a month with an average of £40 an order. It is not a huge business – we do not have a big budget for Google advertising.

“We are both very organised. It is important to love what you are doing. We couldn’t put in the energy that we do if we didn’t love it. We have become both firm friends and business colleagues. We want Riding With Mates to become a known name within the cycling world, to grow it and increase sales.”

Intriguingly, both attribute the launch of their venture to lockdown. As Jenny says: “I was working with GP practices in London, and that would mean a commute down there, staying overnight two nights a week. Now I can walk across the lawn to my office. Lockdown has allowed me to multi-task and do everything at home.”

Says Sarah: “Without lockdown, we would not have had the time.”

After an hour or so in the company of this enterprising duo, it’s clear that clothing, jewellery, NHS coaching and cake-baking are now all part of the daily mix for the two colleagues who owe their friendship – and business ambitions – to cycling.