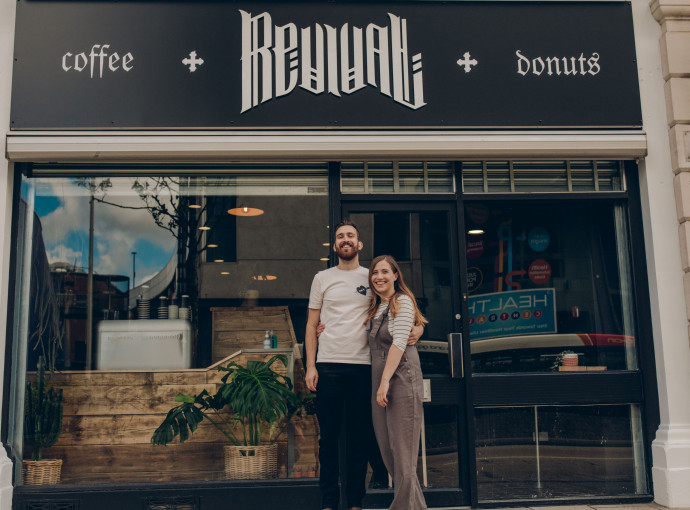 Megan Hayward and Jack Nicklas are supporting local suppliers and raising money for local charities at Revival Coffee and Donuts, and they hope to create as many as 10 jobs when the business becomes fully operational.
The couple, who live in Cottingham, came up with the idea of opening a specialist coffee and doughnuts shop after being impressed by similar businesses on their travels around the country.
Megan said: “We saw some amazing places. I’m into baking and finding things that taste good so I decided to have a go at making doughnuts!”
Equipped with a £20 fryer, Megan set about dishing up prototype doughnuts and, encouraged by the responses after testing on family and friends, secured a contract to supply a café in Hull.
She said: “By the second week people were queueing at the café, waiting for our delivery. Then other businesses heard about our doughnuts and started to contact us and it built up from there.”
Demand surged again after Megan and Jack took their wares to the Good Things Market in Humber Street and sold 250 doughnuts in less than two hours. They intensified their search for premises and have now converted the former salon in Ferensway.
They’ve ripped out the wash basins, mirrors, power points and chandeliers from the previous business and brought in custom-made counters and tables, with murals designed by local artists.
The ground floor has a serving counter and limited seating and downstairs is the prep area – where the magic happens as the doughnuts are delivered from the micro-kitchen at home and transformed into tasty treats with icing and other additions.
Megan said: “It was a struggle to find the right unit but the place we have is too good to be true. It’s in a great location and we were able to make the changes we wanted.”
With home-made doughnuts and with hot drinks from River City Coffee and Leaves of the World tea, Megan and Jack are planning to add soft-serve ice cream. Almost all the products are vegan, with an enthusiastic thumbs-up from non-vegans.
Megan said: “We had a soft opening over two days at the beginning of July and just invited family and friends. It went very well and we’re now looking forward to our official opening on Saturday, July 18.”
The initial opening hours at Revival Coffee and Donuts are 11am until 4pm Thursday to Sunday. The plan is to extend the opening hours in the coming weeks and details will be posted on the company’s Facebook and Instagram pages.
Kathryn Shillito, HullBID executive director, said: “We’re delighted that Megan and Jack have found their ideal premises in the city centre. We’ve heard great things about their coffee and donuts and we look forward to working with them to spread the word.”