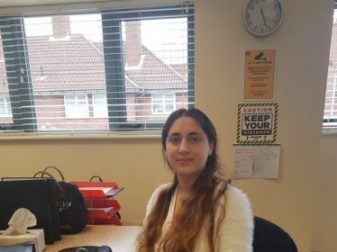 A young graduate landed a job and then quick promotions at a Birmingham manufacturing company thanks to an apprenticeship provided by The Apprenticeship Works, part of Oldbury-based BCTG Group.

Raluca Munteanu, aged 24, gained a BSc degree in Psychology with Criminology from Birmingham City University, but realised that extra qualifications would help her enter her chosen career of human resources.

The Apprenticeship Works accepted Miss Munteanu onto its programme and helped her prepare for an interview at RH Nuttall Ltd, where she was taken on as a Business Administration Level 3 apprentice in the accounts department in April 2019.

The gasket manufacturers, based in Nechells Green, Birmingham, promoted Miss Munteanu and, after gaining a Distinction in her apprenticeship, she has now successfully applied to become a HR and health and safety assistant at the company.

Miss Munteanu, originally from Tulcea in Romania, said: “After I finished my university degree, I wanted to jump straight into working for a company in an HR department.

“However, after research, I realised it wouldn’t be as easy as I thought. Hence when I saw what an apprenticeship was and what it offered, I decided that would be the best option.

“I applied to The Apprenticeship Works and they accepted me, were very welcoming and walked me through all the steps I had to take.

“Once I had an interview at RH Nuttall Ltd, I knew that was the company I really wanted to work for as they were committed to helping apprentices grow.

“RH Nuttall was amazing throughout my apprenticeship, and I received all the support needed from my colleagues, from my manager whose help was instrumental in me passing the course, and from the directors.

“I started as an office administrator in the accounts department and slowly my knowledge and skills were noticed and I was promoted to purchase ledger assistant.

“I became one of the first points of contact for suppliers, closely liaising with the purchasing department, creating new processes to increase accuracy and time efficiencies, and helping new apprentices in my department.

“When a new position came up as a HR and health and safety assistant, I applied with the hope of being internally promoted and fortunately I succeeded.

“I have now finished my apprenticeship with a Distinction, and I will always be grateful for the chance The Apprenticeship Works offered me, and for the trust RH Nuttall placed in me.”

Jyoti Gordon, accounts manager at RH Nuttall, said: “Raluca quickly became a valued member of the accounts team and always worked beyond her job role which was quickly noticed.

“Raluca works in a methodical and logical way in both a team and individually. Since joining RHN, Raluca has helped all departments with different types of work and we are very glad that she taken the job role of HR and H&S assistant.”

Bev Morris, business development co-ordinator at The Apprenticeship Works, based in West Bromwich, said: “We’re so pleased to see how well Raluca has done at RH Nuttall after taking her apprenticeship.

“She is a great example of how the right programme can graduates to refine their skills and qualifications to succeed in getting into their chosen careers.”