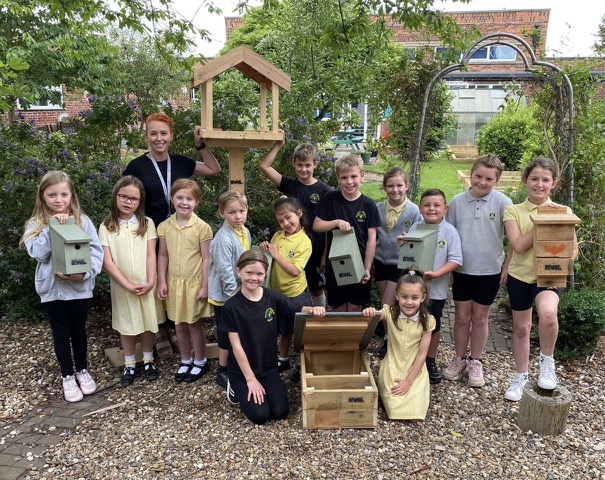 Hull primary school children leapt to the challenge to build a bug hotel for their school.

Schools entered a recent competition run by KWL and the first five to enter received a bug hotel starter kit made up of recycled materials from the company’s supplies.

Pupils around Hull designed and constructed their own bug hotels as part of this environmental challenge set by KWL to encourage more wildlife.

Judges from KWL were impressed with the effort that had been put into creating entries.

Roger Grannon, chief operations officer, said: “At KWL the environment and sustainability is at the top of our agenda. We have been working since 2013 to reduce the impact our business has on climate change and last year we extended this to create a wildlife area on our premises at Kingswood. This year our aim has been to take this into the local community and as soon as we launched the competition on social media, schools from across the city applied to take part.

“The first five schools to enter were given a starter pack made up of waste materials from our business.

“Last week our team visited the schools to talk to the pupils and teachers and to check out the bug hotels. It was an absolute pleasure speaking to children who had worked hard on their projects, whilst demonstrating their creativity. We were astonished by the amount of time, effort and enthusiasm by all who were involved. It looks like there was a lot of fun involved too, coming up with names such as The Crawley Hotel and Bugingham Palace.

“The final decision was tough, but one entry did stand out as the school had embraced the environmental theme. Naming theirs Air Bee n Bee, Gillshill Primary School had engaged with families and encouraged them to build bug hotels at home during the half-term holidays. All judges were genuinely heartened when we saw pictures of the children and their families working on the projects at home, creating more havens around our city for bugs and wildlife to thrive.

“We have worked with a local charity, Humber Wood Recycling Project to create the prizes, which includes a bird table, bird boxes, bat boxes and a hedgehog house for Gillshill. So everyone’s involvement has helped the environment and local people as well.

“The other entrants were so good that we also provided runners-up prizes. These included four bird boxes and two bat boxes for each school.

“We truly believe this competition has been a great success and would really love to hear what others think. If other schools or parents have suggestions for our environmental competition in 2023, we would like to hear your ideas.”

Rebecca Robinson, assistant headteacher at Gillshill Primary School, said: “It’s been a great opportunity for our pupils to learn more about bugs and how we need to help them thrive. They really rose to the challenge and took their learning home, making much more of the competition that even KWL had expected.”