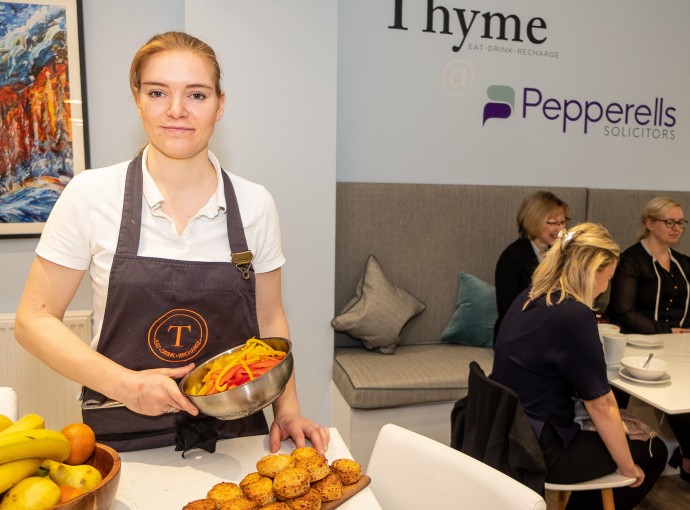 A chef who has shone in Michelin-starred restaurants around the world is now spearheading a healthy eating drive by a law firm working to promote the wellbeing of its staff.
As executive chef at Pepperells, Amy Heward runs Thyme, the staff restaurant that has opened at the firm’s offices in Hull. She’s also leading the initiative to supply tasty and wholesome dishes to Pepperells’ offices in Grimsby, Lincoln and Scunthorpe and she looks after the corporate functions.
Amy’s background is in fine dining, with a passion for food that was ignited as an eager apprentice at Hull College. She crammed a two-year course into six months and embarked on a journey that included two years at the acclaimed Winteringham Fields in North Lincolnshire, followed by spells at Michelin-starred restaurants in Bray, London and Lyon and a series of appointments at top Australian restaurants which held two coveted Chef’s Hat symbols.
Along the way Amy got to know Ben Pepperell, chief executive of the law firm, and he asked her to run the new venture at a time when she was looking to diversify.
She said: “I got to the point where the next step should have been to run my own restaurant or hotel but it was the usual thing holding me back – not having a couple of million in the bank! I decided to take a step away from the industry and try something a bit different to build financial stability.”
Amy set up a small property investment business and the approach from Ben enabled her to keep on top of her culinary skills. The staff who frequent Thyme are not tucking into the sort of extravagant delights served up by Amy at such places as the Waterside Inn, Bray, Gordon Ramsay at Claridges or the Restaurant Tetedoie in Lyon but they do enjoy private dining with top-quality ingredients expertly prepared.
The recruitment of an assistant to Amy has increased capacity with the result that dishes can be delivered to Pepperells’ other offices and reheated.
Amy said: “Ben was looking at ideas to do more for the staff and part of that was to give them a chance to eat healthy food. If they’re dashing around it’s easy to end up eating things they shouldn’t, or eating at their desks or not having lunch at all.
“Every day we do a soup, hot sandwich, three or four salads, cold sandwiches and a main meal, maybe pasta or risotto. The restaurant has a bistro feel to it and it makes people feel as though they’ve stepped outside the office. I find it interesting and very different – for the first time all my customers are from one industry!”
Ben said: “Our mission is ‘Pepperells, your partner for life’ and it applies externally to our client base and internally as well. Employees are not just employees, they are an asset on our balance sheet not a liability.
“As with many occupations, the pressures on time management and demands on our people have intensified. We recognise how hard our teams work and as part of our health and well-being programme we launched Pepperells’ Perks which, amongst numerous benefits, includes Thyme, our free staff restaurant and lounge hosted by Amy.”