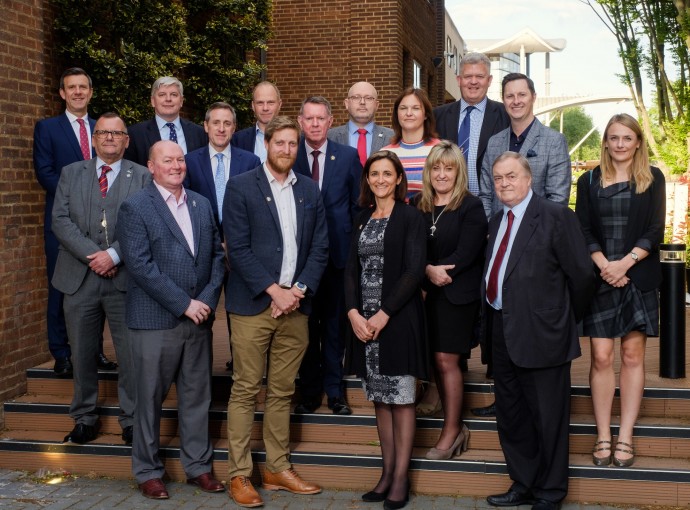 A group of 11 leading players from the private and public sectors have become the first Principal Partners of the marketing agency for the Humber.
The commitment means they will play a leading role in delivering Marketing Humber’s new, ambitious vision and strategy, including promoting the Humber’s opportunity to become a world leader in combating the catastrophic threats posed by climate change.
The major businesses and organisations that have become Marketing Humber’s Principal Partners together employ tens of thousands of people and are key drivers of investment and economic growth across the Humber estuary. They are:

As a key element of its new strategy, Marketing Humber has joined with the University of Hull to launch a powerful, long-term campaign, called the Waterline, to promote new economic models that demonstrate how decarbonisation can deliver both environmental sustainability and economic growth.
The campaign recognises that the Humber is one of the coastal regions around the world listed as at high risk due to rising sea levels and increasing flood threat. It also builds on the Humber’s ever-growing reputation as the UK’s leading centre for renewable energy generation.
Marketing Humber chairman Andy Parkinson said: “We’re delighted so many of the Humber’s biggest players have come together behind our shared vision with the University of Hull to elevate the region to a position of international economic significance and environmental sustainability.
“This is just the start – there are more opportunities to join us and we are talking to several other leading organisations about also becoming Principal Partners.
“Our Principal Partners include many of the biggest employers and investors on the north and south banks of the Humber and those who operate across the estuary.
“They also include energy producers who are leading the transition to a low-carbon economy and organisations that are pioneering climate resilience.
“The Principal Partners illustrate perfectly the Humber’s credentials as a region that can showcase how the world can work towards a clean growth future.”
Many of the first Principal Partners came together with other business representatives for a launch dinner at the University of Hull. They were joined by Lord Prescott, who has campaigned for decades on action to combat climate change and is now an Honorary Research Fellow at the University of Hull.
They heard about the opportunity for the Principal Partners to join a series of think tanks, building on the University of Hull’s links and knowledge base, to develop projects to deliver the ambitions of The Waterline campaign.
Mr Parkinson added: “Our partnership with the University of Hull enables our Principal Partners to add their own ideas and opportunities to the university’s acknowledged international expertise and credibility in this field.
“The combination of industry and academia offers the ideal blend to take ideas from concept to execution.”
One of the Principal Partners is petrochemicals company Phillips 66, whose Humber Refinery has been at the heart of the Humber economy for 50 years and employs 1,100 workers. Some 20 per cent of all UK petroleum products come from the facility, which also produces raw materials for everything from plastics to toiletries.
The refinery is now leading the way in the transition to a low-carbon economy by pioneering products used for electric vehicle batteries and biofuels.
Darren Cunningham, UK lead executive and general manager of the Phillips 66 Humber Refinery, said: “Our commitment as a Principal Partner reflects both our support for Marketing Humber’s work to promote the area on the national and international stage and our belief that the Humber has a unique opportunity to develop solutions for a sustainable future.
“Our Humber Refinery produces the products we need to fuel our modern society. We are committed to doing so in an efficient and sustainable manner and to working with the Government and others towards achieving their decarbonisation targets.
“We are unique in the UK in producing high-grade petroleum coke, which is used as a key component in the manufacture of lithium ion batteries for use in consumer electronics and, increasingly, in electric vehicles. We are also the first UK refinery to reprocess waste oil to manufacture biofuels.
“We recognise the uniqueness of the Humber region and the potential to be a living laboratory to test decarbonisation techniques such as carbon capture and reuse. As an energy intensive industry we see ourselves as an integral part of the solution.”
Marketing Humber represents a powerful network of more than 250 Bondholder businesses and organisations who work together to raise the profile of the Humber as a great place to live, work, invest and visit.
Marketing Humber managing director Dr Diana Taylor said: “We’re now developing a significant schedule of events and activity, involving our Principal Partners and other Bondholder ambassadors.
“This will include the first of a series of think-tanks to explore the opportunities for the Humber to take a position of global leadership on the critical challenges posed by climate change.
“Working closely with the University of Hull, we will also launch a London Humber Ambassadors Club of leaders and influencers based in the capital with connections to the Humber who have the clout to make the ambitions behind the Waterline campaign a reality.”