PP Bounces Back in Style 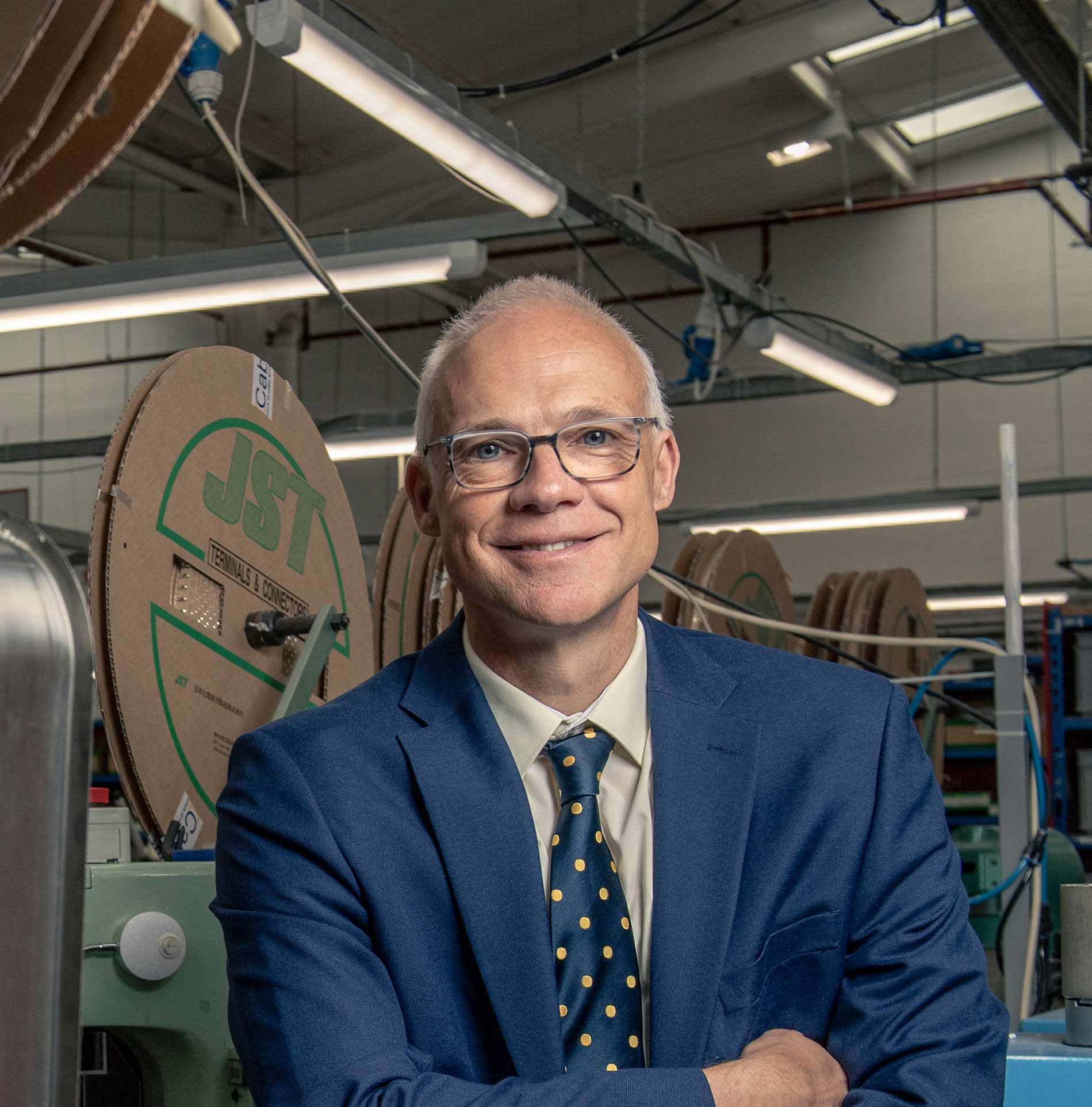 They’ve been a proud and ultimately inspiring feature of the West Midlands industrial landscape for more than 50 years – and nobody can tell the story of PP Control & Automation better than CEO Tony Hague.

That story encompasses a wide range of everyday products and a vast array of machinery and processes, all linked to a factory in one of the region’s lesser-known communities in the heart of the former Cannock Chase coalfield.

“Not a day goes by when people in the UK do not use a product which is part of the PP story, such as crisps, milk, mobile phones…this little company in a place called Cheslyn Hay works with 15 of the most successful machine builders, world number ones in their own spheres,” says Tony, sitting in the firm’s well-appointed offices on a typically winter December morning in Staffordshire.

“We are the first cog in a very long wheel…we supply systems which go onto machines which weigh and bag crisps…we have links with dairy, with food manufacturing processes, with Formula One.

“When you buy a new Smart Phone for your teenage son or daughter and they drop it down the toilet but it doesn’t break because it is waterproof, we have made the machinery which helps to waterproof it.

“The customers we have here world-leading machine manufacturers…they are only going to grow and we want to be on that journey with them.”

Nothing illustrates the admirable history of PP better than its response to the ‘war effort’ during the early months of the UK’s worst medical emergency for 100 years as Covid-19 threatened to bring much of the UK economy to its knees.

“We were open 24-7, working double shifts. We provided over 50,000 parts which went into medical ventilators. We had never made these parts before…we worked crazy hours. Just before Easter 2020 we had to scale up to start producing products in just hours or days.

“We turned offices into production areas. We were sourcing parts and tooling and working every hour God sends. We were manufacturing parts that went into ventilators – electrical assemblies and critical wiring harnesses.

“It was a call to arms, a call to action. This was something much bigger than work. It was a great learning curve for us, it gave us a chance to get involved in a national effort. I was in my car racing all over the UK…I was putting out calls for action on social media, I was e-mailing people, calling suppliers.

“We were racing around, picking up parts, picking up tooling. We took a lot of satisfaction from seeing people respond to it, I took a lot of pride from it…this was going back pre-vaccination. People were dying.”

The firm’s extraordinary response to the UK Ventilator Challenge says a great deal about the 230-strong workforce at the Staffordshire company, which has mushroomed over the last 20 years from a manufacturer with just 36 employees and a £3.5 million turnover in 2001 into a thriving concern with global links and sales revenue approaching £30 million.

But none of the company’s achievements and growth over the last two decades would have been possible without the original vision and energy of industrialist David Fox, the man who first saw the potential for PP – and would later hire Tony Hague to help steer the firm towards a more prosperous future.

Tony recalls: “David acquired the company in 1989, it was a very traditional switchgear manufacturing business which had fallen on hard times. He was a sales engineer and had worked for a number of companies. He decided that he wanted to set up his own business, and acquired the name of Power Panels Electrical Systems and set it up on a small site in Bloxwich. He built up a nice little control panels business working for several Midlands companies, including Austin Rover.

“It was focused on control panels and switchgear work and he built it into a £2 million revenue business over a number of years. He moved onto this site in Cheslyn Hay in 1994.”

By then, Tony, an apprentice-trained engineer whose father was a draughtsman – “My dad was always wiring, designing and drawing, I was always playing with wires and batteries, I was always destined to become an engineer” – had been offered a job by David.

By his early 30s Tony had risen to sales and marketing director at Italian-owned Lovato UK, a Stourbridge-based controls distributor, where he first encountered the man who would later shape his career.

“David kept chipping away, he said: “You should come and work for me, we get on really well. You are a great sales guy.” It was like a father/son relationship.

“That was in 2001. I thought ‘why not?’ Let’s give it a go. The business at that time was 36 people, with a £3.5 million turnover. It was called Power Panels Electrical Systems, a nice business not making a lot of money. The company had 50 customers, but they were not making any money from most of them.”

Key to the subsequent resurgence and growth of the Cheslyn Hay firm was its relationship with Worcester-based Mazak, a Japanese-owned machine tool manufacturing company.

“Mazak were our first true partner and we are still working with them now, all these years later. They were light years ahead of PP, they spoke about Kaizen (continuous improvement), working in partnership together. The Mazak relationship and type of partner that you invest in for the future was the blueprint for the future sales strategy.

“They were the catalyst for change in the early 2000s. They are our most important and treasured partner. They would send engineers onto the shopfloor for quality checks, we were very much the student, they were very much the teacher. That developed into a change in culture, they put us on this journey. We owe them a massive debt.

“Japanese manufacturing processes were light years ahead of the UK in culture and attitude. On the back of growing with Mazak, we targeted other OEMs in different sectors such as food, printing, packaging. We had a great customer reference in terms of Mazak and we attracted more customers, enjoying year-on-year growth of 15 to 20 per cent.

“We were successful and we attracted new OEMs, they liked what they saw and we grew the business. We took on extra staff and extended the factory three times. We are up to 230 people now and sales revenue is approaching £30 million.”

Today’s transformed operation at PP – now renamed PP Control & Automation – marks a stark contrast to the grim days of 2008-09, when the sub-prime mortgage crisis in the US triggered a vicious global recession and subsequent banking bailouts.

“I have never seen anything like it. It hit manufacturing so hard. I was scared to answer my mobile phone at one point – it was unbelievably grim, everyone on the customer order books turned to mush.

“It was the first time I have ever had to make redundancies, 30 to 40 out of around 170. As directors, we decided to take pay cuts. We were completely fair, consistent and communicated with staff.”

But true to the PP work ethic and the firm’s capacity for reinvention, within just a year the bleak days of recession were history. “Within 12 months or so, we had rebounded and grown 100 per cent.

“Of all the people we had made redundant, everyone came back, apart from one lady who was six months pregnant. That tells you a large amount about this business – nothing made me happier than to see these people come back, this business is like a family.

“We had seen our revenues drop by minus 70 per cent one year, only to rebound by 100 per cent the year after.

“When we went into this grim period, we did lots of things to protect the liquidity of the business. We had founded our own in-house training school in 2001 and created a structured training roadmap. So we made the minimum number of people redundant and doubled up on training hours for all employees It accelerated personal growth and development – improving processes, removing waste and optimising productivity etc. Almost everyone in the business went through the training school.

“In 2010 our revenues doubled, it put us back on the right path. It had been a blip in growth, a bloody painful blip but we recovered.”

Tony, 52, is justifiably proud of PP’s progress over the last decade during an era of continued shrinkage of the UK manufacturing base. “We have got 26 customers and 15 of them are world number one in their own specialisms, whether it be pharmaceutical, medical, printing or laser marking. We have worked hard to develop our capabilities. In the last decade, market opportunities and technology have accelerated – we are talking about a new era of automation and control.

“I am absolutely delighted. We have almost multiplied the business by 10 in 20 years.”

Even the horrors of Covid were insufficient to blow PP off course, as Tony and his team took on the UK Ventilator Challenge with gusto. “We are a manufacturer, we cannot work from home because we are a factory.

“We followed Government guidelines, we introduced a new split shift system, introduced mask-wearing, put in infra-red cameras and set up our own lateral flow testing capability.”

Before Covid struck, PP had entered a new phase of investment and growth thanks to Canadian group Ardenton Capital. “David Fox was in his mid-80s and exited the business in 2018. Ardenton invested in the business – they are great partners. It has not changed our culture, what has changed is our ability to think bigger. Growing this business needs a different approach to investment.

“A company like Ardenton are long-term partners, buy and build. It is about long-term growth. We have got a 5-year plan to get the business to £50 million revenues. We believe that there is a great opportunity in North America and the ambition is to achieve that. There is also a lot of growth that we can achieve in the UK and Europe.”

In line with PP’s success, Tony was recently named one of the LDC Top 50 Most Ambitious Business Leaders for 2021 – but dedicates the award to the firm and his colleagues. “It is an award for the business, I accepted it on behalf of everybody.

“This business is everything to me – it is a privilege to have the role of CEO here. I thoroughly enjoy what I do. I can’t imagine ever doing anything else – it is the only thing I know.”

Married to wife Debbie for 30 years with a son and daughter in their 20s, Tony admits he only switches off during the firm’s Christmas festive shutdown.

“When I go on holiday, the first thing I pack is a laptop and I-Phone.” It’s a formula which seems to work for Tony Hague – and PP Control & Automation.