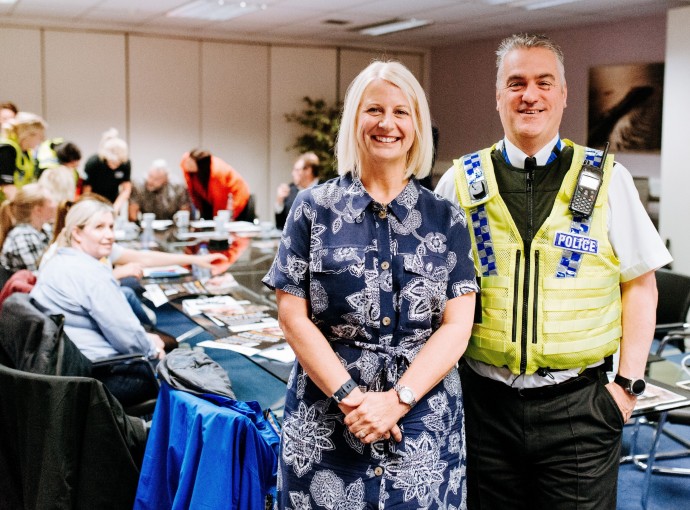 Chief Superintendent Darren Downs, North Bank divisional commander for Humberside Police, told business representatives they would see a difference in the city centre as a result of partnership working. But he warned that change would take time.
He said: “You will always have my commitment and I expect us to make a difference with the multi-agency group. But what we can’t do is solve it overnight.”
Ch Supt Downs spoke at the Retail Security Group, which is organised by HullBID and brings together retailers, cafes, banks and other organisations – including Hull City Council and the homelessness charity Emmaus.
He listened as business owners told of their experiences in the city centre and how a police presence made a difference in terms of deterring potential offenders involved in antisocial behaviour, shoplifting and drug use.
Many said they had seen customers being harassed for money with young, old and vulnerable people handing over cash because they felt intimidated. They welcomed the new “Small Change in the Right Hands” posters, which are part of a campaign led by the Community Safety Partnership advising people to donate to organisations such as Emmaus rather than to beggars.
The meeting discussed creating exclusion zones to keep offenders away from the city centre and introducing new design features, such as improved lighting, to create an environment in which criminals found it more difficult to operate.
The group also discussed other towns and cities and how they cope, and Ch Supt Downs said evidence indicated many centres face more severe problems than Hull.
Inspector Jules Hart, who leads the Hull Central Communities Team, said businesses could help the police by providing information on crimes and offenders, with the possibility that civil injunctions can be secured to prevent repeat offending.
But Ch Supt Downs highlighted social and mental health issues as among the complications which mean that crime and antisocial behaviour could only be tackled in partnership with other organisations. He said he would look into inviting some businesses to join the Improving Outcomes group, which included a wider range of agencies that can address issues which are not the responsibility of the police.
He said: “We have got to get other people involved in the Improving Outcomes group to talk about what they want to see from the courts, the City Council and other partners. There are various steps planned at the moment but we have to be careful we don’t just displace the problem. We are working on a co-ordinated longer term solution.
“We will try to prioritise the city centre because I have always been of the view that if you are in control of your city centre the rest of the city tends to comply a bit more. HullBID is a strong, powerful community that can exert influence and pressure.”
The Retail Security Group was set up to help address the issues around crime and to provide a communications channel between businesses and the police via HullBID.
Kathryn Shillito, HullBID executive director, said the group presented an opportunity for the police to learn of the real issues businesses were experiencing and the detrimental effect they had on trade.
She added: “Our members wanted direct access to decision makers within the police and looked to HullBID to take the lead and coordinate the meetings. The discussions we have held so far have been very positive with businesses conveying first-hand accounts of the problems arising from crime and antisocial behaviour in the city centre.
“That information enables the police to manage their resources more effectively, and it helps businesses develop their own crime preventions strategies. But this is just one element of a partnership approach. Regardless of whether they attend the meetings, every business in the city centre can help by providing the police with details of crimes and offenders through the usual channels.”