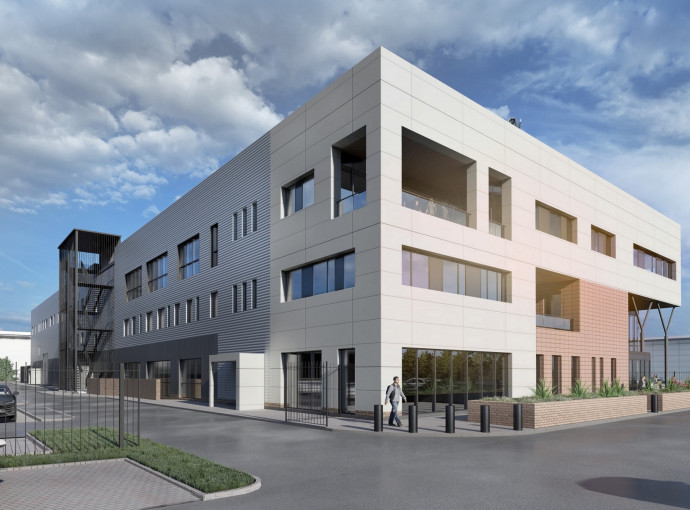 The 107,000 sq ft, three-storey operational support building is proposed to be developed at Wykeland’s flagship Melton West business park, west of Hull.
It will consolidate an existing centre for Humberside Police’s specialist teams and support staff, known as Melton 1, which opened at the business park in 2014.
The new building, Melton 2, will be sited next to the existing facility and provide high-quality accommodation for around 535 staff from the force’s Operational Support Services.
The proposed development would be the latest major investment at the fast-growing Melton West site. Pending planning approval, construction of the facility is expected to start in the second quarter of next year.
Melton West is one of the Yorkshire’s leading business parks and already has more than 800,000 sq ft of manufacturing, warehouse and office space, with leading companies on site including Kohler Mira, Heron Foods, Needlers, House of Townend and Allam Marine. Work on a new, £10m Mercedes Benz dealership, to be built beside the A63, is also due to begin early in the new year.
The new Humberside Police building will be sited at a pivotal location for the force, providing excellent road access to the wider region. In conjunction with the existing centre, Melton 2 will provide tailored facilities for operations and support staff, supporting greater functional efficiency. The proposed scheme also aims to improve the quality of work and training environments for Humberside Police personnel.
The building has been designed by Bond Bryan architects and is proposed to be delivered by Willmott Dixon. The design includes sustainable features, such as energy efficient heating and lighting systems, the use of environmentally-friendly materials and facilities to encourage staff to cycle to and from work.
Wykeland managing director Dominic Gibbons said: “We are delighted that Humberside Police has chosen to expand its facilities at Melton West with this major, high-quality development.
“It is a fantastic vote of confidence in the business park and underlines the benefits the existing facility has delivered to the force and the public it serves.
“Melton West has an ever-growing reputation as a premier location of choice for leading businesses seeking an opportunity to develop and grow. With easy access on to the A63 and M62 to Hull, Leeds and Manchester, it is ideally placed to continue to grow into one of the largest and most prestigious commercial hubs in the North of England.”
Humberside Police and Crime Commissioner Keith Hunter said: “The new development at Melton will, if approved, allow Humberside Police to bring together a number of specialist crime investigation functions, some of which deal with the most serious crimes and vulnerable victims, and provide a new, state of the art force control room which will continue the great progress made in public contact over the last few years.
“It will also free up space in other buildings to accommodate the uplift in police officers which we have increased by around 500 since 2016.
“This development goes hand in hand with the continuing push to get uniformed officers back into the hearts of communities which has seen officers returning to abandoned police stations. I will continue with the Chief Constable to explore every option to spread officers as widely as possible whilst providing the capability for less obviously visible teams to come together to promote efficiency and value for money.
“This capital investment has been planned for some time and built into our five-year financial forecasts which were supported by the Police and Crime Panel in February 2019. I am pleased the force is working constructively with Wykeland and building upon the successful relationship forged in developing the original Melton facility.
“Earlier this year Her Majesty’s Inspectorate graded Humberside Police as ‘good’ across all areas for the first time in the force’s history. I said at the time I would work with the Chief Constable to ensure the improvements made were sustainable and that we would move forward together towards excellence. This investment is part of that strategy and I will monitor its progress to ensure the force continues to provide the best possible service for the public”
Hull-based Wykeland began a new phase of development at Melton West earlier this year by investing £1m to create a new 400-metre access road and related drainage and services infrastructure. The works unlock a further 27 acres of development land at the fast-growing site.
It followed Wykeland’s acquisition in 2018 of a neighbouring site to expand Melton West and make it one of Yorkshire and the Humber’s largest commercial hubs. The multi-million pounds deal for the purchase of the former Melton Park site increased the total size of the Melton West development to 200 acres, providing up to 2.85m sq ft of space.
The business park benefits from Enterprise Zone Status, has easy access via the A63 and M62 to the national motorway network and is close to the Humber ports, the UK’s busiest trading complex.
Wykeland is one of Yorkshire and the Humber’s leading commercial developers with a development pipeline of almost £400m across the region. Other flagship Wykeland schemes include the fast-growing Bridgehead business park close to the Humber Bridge and the @TheDock tech campus in Hull’s Fruit Market waterfront quarter.
Wykeland is part of the Wykeland Beal joint venture with East Yorkshire-based Beal Homes which is driving forward the regeneration of the Fruit Market, in partnership with Hull City Council. The latest phase of development of the Fruit Market featured the recent start of construction on a new showpiece head office for Arco, the UK’s leading safety company.
Wykeland is also working in partnership with Hambleton District Council to transform the former Northallerton Prison site in North Yorkshire into the £17m Treadmills retail, leisure and business destination.