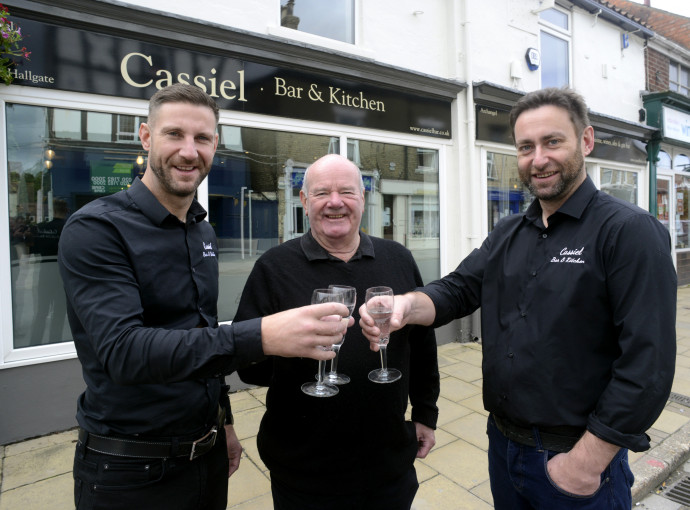 The brothers have created 10 new jobs at Cassiel Bar and Kitchen in Cottingham and are promising to bring something different to a village which is not short of pubs but has missed out on the café bar concept.
Simon said: “You look at other areas of Hull such as the Avenues and Humber Street as well as the surrounding area of Beverley and Hessle – they’ve all kept up with the times and café bars have added something. But it’s never really happened in Cottingham and that’s one of the things we want to change.”
Chris said: “We’ve literally grown up in the pubs of Cottingham and our investment here is all about supporting them by offering something which will attract more people to the village, making it more of a destination and increasing footfall for the other pubs and restaurants.”
Terry Leahy and his wife Shirley ran the Tiger in Cottingham from 1977 until 1991. They took on the Blue Bell for 12 years in 1992, with Terry’s sons living in the first-floor apartment as they embarked on their own careers – Simon in IT and Chris in security systems before moving into property and facilities management.
Terry’s early career included spells on Hull’s fish market and fruit market before he took his first pub, the Victoria Dock Tavern, 45 years ago. With Shirley he also had the Raine Club and Jesmond Club in East Hull, and he was part of a consortium that ran Pepi’s at Hull Marina, the Yarborough Hotel in Grimsby and the Halsham Arms in Holderness.
His last pub role came after retirement, as Sunday lunch chef at the Railway Inn, Cottingham, which is being demolished to make way for a new residential development.
Terry said: “It’s fair to say that pubs are in our blood. We’re really proud of Chris and Simon for the fantastic job they’ve done with Cassiel. It’s a great addition to Cottingham and it certainly couldn’t be more different from the old Victoria Dock Tavern!”
Simon ran a bar in France and also had the Duke of Cumberland in Cottingham for more than a year. After leaving the Duke in 2018 he identified a number of sites around the village which he felt had potential for the next project.
When one of them became available last year they moved in to agree a 15-year lease for the greetings card shop which over the years had also sold shoes and bridal wear.
Local tradesmen – most of them familiar faces in the pubs of Cottingham – came together for a major renovation project which involved stripping wooden panelling from the walls, digging up the floor down to the mud and removing a chimney breast which had served two adjoining properties.
Chris said: “We brought in local people to do the steelwork, the joinery, plumbing, electrical work and everything else. When we started there wasn’t even a gas supply into the building! Lockdown delayed things but now we’re up and running and the response has been fantastic.”
Cassiel has been busy over its opening weekend with people enjoying beers, wines, cocktails and hot drinks. They menu will be launched later this week and will have a Mediterranean flavour including pasta, tapas and grills available seven days a week. Longer term, Chris and Simon are already looking at other possible locations.
Simon said: “We picked this place because it’s just the right size, nice and cosy and perfect for day time and evening business as well as private parties and business and cultural events. It’s also a great location in the heart of the village and will benefit from Cottingham’s busy calendar of events – the market every Thursday, Springboard music festival, Cottingham Day in the summer and the fantastic Christmas lights in the village.
“We’ve got more ideas and we’re considering other sites but Cassiel is the immediate priority and it’s a great place to start.”