Pint-sized beer garden pulls in the punters during lockdown 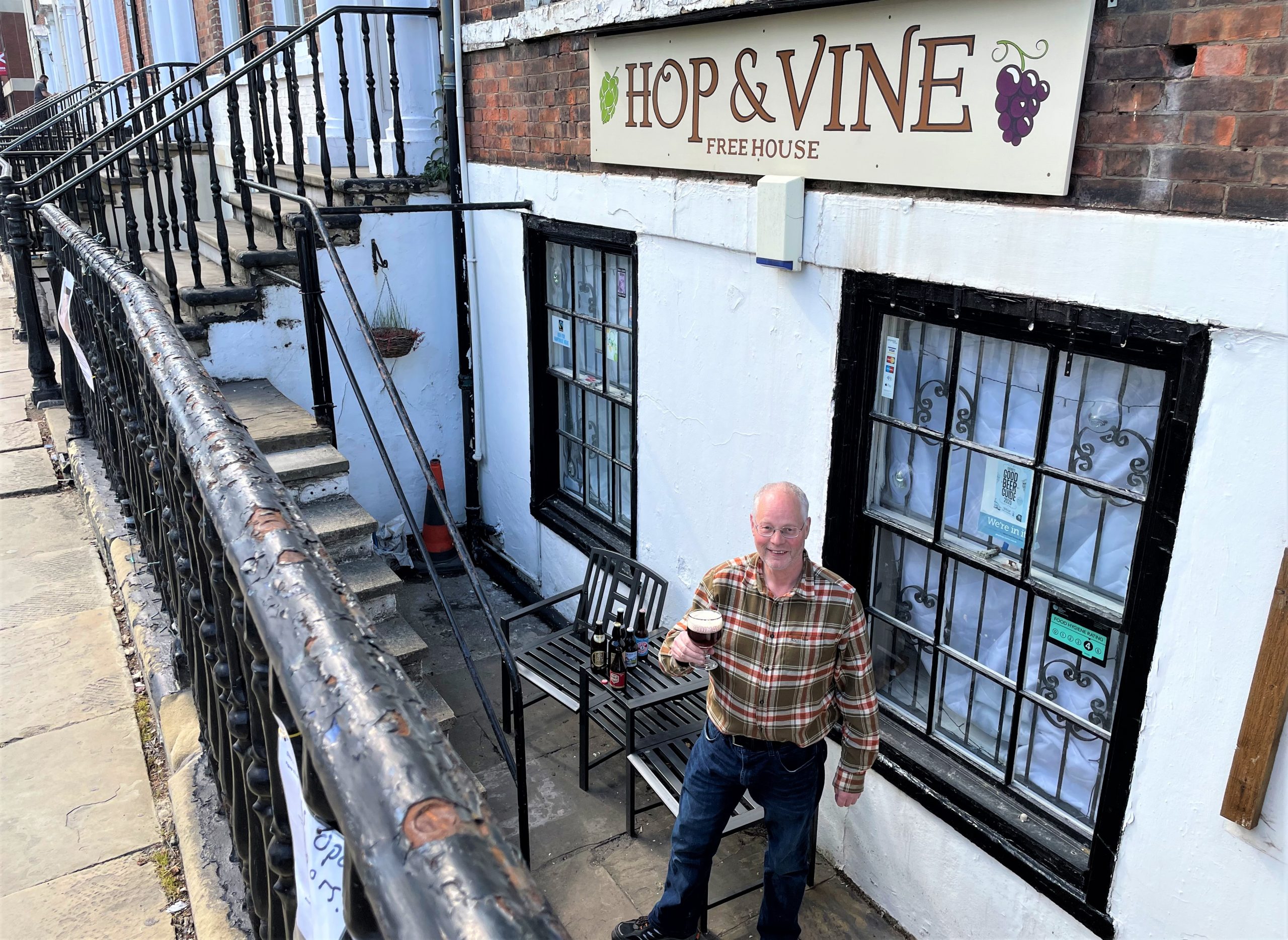 Is this the smallest pub beer garden in East Yorkshire? Or even in the UK?

The cosy table for two has formed part of a lockdown lifeline for the Hop & Vine, with landlord Tony Garrett (above) welcoming customers – and dogs – by appointment only to the cellar bar in Albion Street, Hull.

Delivery and collection services have kept things ticking over during the months when customers were unable to call in, and the beer garden – pint-sized in comparison with other venues – reopened from April 12.

The outdoor facilities amount to a “love seat”, readily available from most garden centres and DIY outlets and comprising a single steel frame of two chairs with a table in the middle. Tony confirmed it was an upgrade on the previous accommodation.

He said: “The Hop & Vine has had a beer garden since long before I took over. We kept it on and it’s come in very handy. It’s tucked in at the side of the steps leading down from Albion Street, out of the wind, a nice sun trap and far enough from the front door to ensure social distancing.

“Before we got this we had a folding table and a plastic chair, so this is a big improvement. Now I think about it I’m not aware of a smaller one anywhere. There was some media coverage about a place setting up two chairs outside until they are able to open properly, but our beer garden is permanent.

“It’s easy to forget about us because people don’t get much of a view as they go past but our regulars know we are here and we put the word out that we’re available for bookings. If I’m here then I’ll serve people but I need to know in advance.”

Tony celebrated the fourth anniversary of taking over the pub on May 1, but admits it feels as though he has only been running the place for three years. He was tempted into the licensing trade after a career in the probation service, drawing on experience gained from his membership of Camra and his volunteering at beer festivals.

He said: “I have always been a fan of real ales and ciders so this wasn’t really a new thing for me. One of the staff who was here when I took over taught me almost everything I now know about running a pub.”

The drinks offer is drawn from breweries in and around Hull, across the UK and worldwide and routinely features a dark beer, a traditional bitter and a lighter, hoppy brew, plus a wide selection of bottles and cans and a good range of spirits.

Tony has built a reputation for excellence from his appearances in the Good Beer Guide and from visits by experts from across the country, with one real ale aficionado from Norfolk naming the Hop & Vine his pub of the year in his best beers blog.

Now Tony is hard at work preparing to welcome customers back into the Hop & Vine from May 17, a task that means relocating some of the stock for collections and deliveries which has taken up much-needed floor space.

He said: “These have been difficult times but we’ve actually attracted some new customers during lockdown as word spread about the delivery service, which for a time was all we were allowed to do.

“Whether we continue that remains to be seen as hopefully we will be pretty busy when we’re able to open the doors and busier still when the restrictions disappear altogether.

“But we’ll still be open for collections and the beer garden is definitely here to stay!”

Kathryn Shillito, HullBID executive director, said: “The Hop & Vine is a great example of a business setting out to bounce back from Covid-19 by making an effort and doing things differently.

“You don’t have to be a big business to do that and often it’s easier for small, local independents to seize the initiative, which is exactly what Tony has done. We look forward to the Hop & Vine opening fully because it’s an important part of the city centre’s food and beverage offer and is definitely an attraction to visitors.”