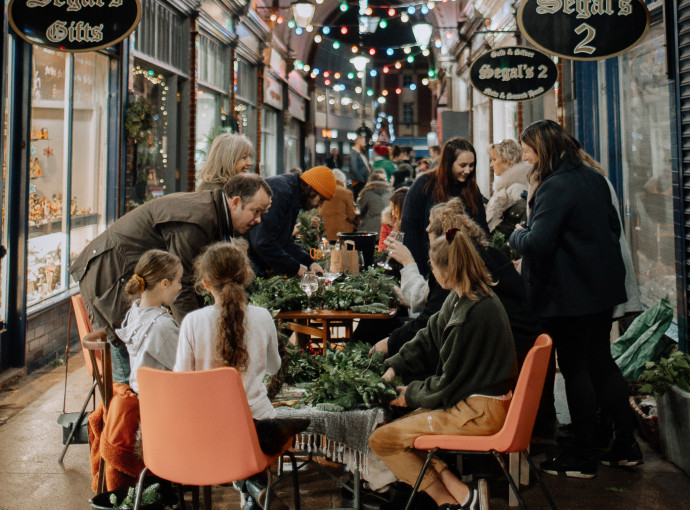 With thousands of people expected to descend on Hull city centre for the big civic switch-on in Queen Victoria Square on Thursday, businesses in Paragon Arcade will showcase their own products and their community spirit.
The Paragon Arcade switch-on will signal the start of late-night Christmas shopping for most of the businesses in the Arcade, which has been transformed since being bought by Hull-based developer Allenby Commercial two years ago.
The first Christmas under the new owners highlighted the variety on offer from long-term tenants including Flower Corner, Segal’s antique jewellery, P J Hutchinson Barbers and Silver Springs vintage clothing as well as from newcomers Two Gingers Coffee House, Marla’s Deli, White Rabbit Chocolatiers and 80 Days Bier Markt.
During 2019 more businesses have moved in including Milk hair salon, Belle and Benjamin babywear and Koda, making bespoke modern furniture. In addition White Rabbit has expanded with the opening of a café on the first floor.
They will all be pulling together on switch-on night, which will feature a DJ session by Sam from Marla’s, and again on Thursday 28 November for the official launch of a new arrival, Homestead Store, which will open its doors in the Arcade on November 25.
Homestead Store will host a Christmas wreath-making session on December 5, and on December 7, Paragon Arcade will present its final After Hours event of 2019, with traders combining to welcome visitors to an evening of great food, drink and entertainment.
Allenby Commercial bought Paragon Arcade, which was built in 1891 by Sir Alfred Gelder, in autumn 2017 and maintained the Victorian look and feel with a refurbishment programme which has improved ground floor units and brought neglected first floor space back into use.
Segal’s jewellers, the renowned Hull business that celebrated its centenary this year, will vacate two units when it completes its move into a new showroom nearby and Allenbys already has new tenants lined up.
Georgia Allenby, design and marketing manager at Allenby Commercial, said: “We have been contacted by other people who want to be in here and are waiting for units to become available. They tend to be start-up ideas so we are creating a pipeline and maybe the Arcade will act as bit of an incubator with businesses becoming established and moving to some of our bigger premises.
“We want to keep Paragon Arcade small, varied and busy with successful businesses. Each business is independent, has its own identity and is doing something brilliant on its own whilst also synching with the other businesses, complementing each other. We’re not just looking for businesses which will pay the rent and be successful, it’s also about whether they fit with the overall theme of the arcade.
“After Hours has become a very popular event and it’s also a great marketing tool. A lot of the enquiries we receive about space come from people who have been to After Hours and want to be a part of that community.
“We allow everybody to have their own style and push new ideas. Two Gingers go to Berlin to taste the coffee before they buy it. They find out what coffee you like and they make it for you. Marla’s uses locally-sourced products to create hearty, home-made goodness. Belle & Benjamin has hand-sourced fabrics which are hand-sewn and handed to the customers. Paragon Arcade is all about meeting the makers, the business owners who turn their great ideas into reality.”
Kathryn Shillito, HullBID executive director, said: “No city or town centre is exempt from the challenges facing the high street and the retail sector. That’s why we work so hard to promote and support local, independent businesses and Paragon Arcade is remarkable because it has been developed to do just that.
“It’s fantastic to see the quality and variety within the Arcade and to see the traders working together to create events which will attract more people into the city centre to the benefit of the wider business community.”
The Paragon Arcade Christmas lights event this Thursday and the launch of Homestead Store on Thursday, November 28 are free to attend. The After Hours event on December 7 is also free, with food and drink for sale from businesses in the Arcade.
Places at the wreath-making event on December 5 are available for £35 per person which includes a wreath, mulled wine and mince pies.