Not your average Italian… 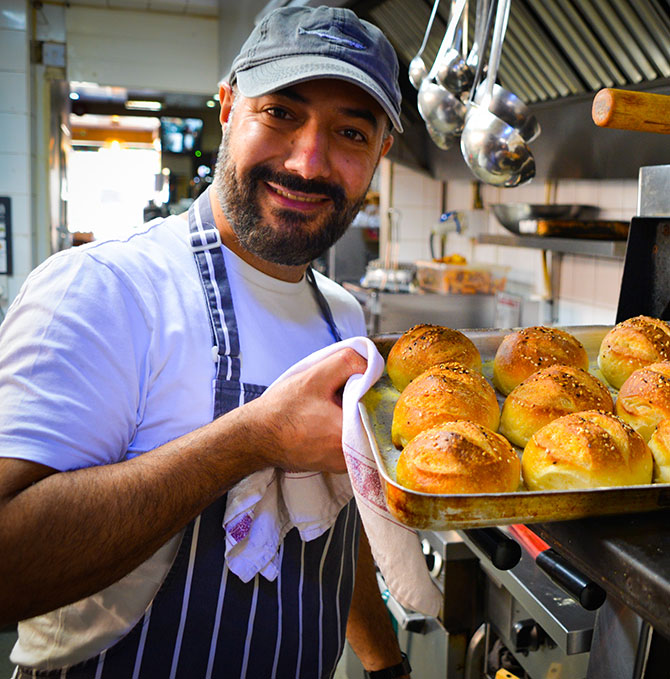 Might as well get the confession out of the way first.

The visit to Piccolo pre-dated the review of Wild Sage in the last edition of BusinessWorks. The logic was simple – get a couple of restaurants in the bag in case everywhere has to close again.

Thankfully things haven’t been that bad, but the hospitality sector has all the solidity of the rich, creamy vanilla ice cream centrepiece of my affogato dessert. Delicious, but short-lived – not that it would have lasted long even without being drowned in espresso, reminding me yet again of the old joke about David Beckham getting his first vacuum flask.*

As we began the search for a venue to host our supper club resumption we found an industry still on its knees. Some places still closed, established dining destinations curtailing their hours to two or three days a week because they couldn’t get the staff. Others limiting the content on their menus for the same reason, and because they couldn’t guarantee being able to source all the ingredients. New ventures operating a bar service only, until they could get a chef.

The silver lining is that there are some very exciting food and beverage businesses in the pipeline. The delays behind being able to open are undoubtedly slowing down the recovery in that sector, and don’t let anybody tell you that Brexit isn’t a factor. They’ll get there in the end, but it is taking time to find suppliers and everything will come at a higher cost than we’ve been used to.

With supper club we’ve tweaked our model to support the sector even more than we did with the tens of thousands of pounds we generated during the five-and-a-half years before Covid. We’ll be paying the restaurants more money for less food and we’ll move away from Monday nights if necessary. Hopefully diners generally will demonstrate similar flexibility.

The fact that Taha Rahman, chef patron at Piccolo, has managed to keep his prices at the same level as when we called in more than four months ago is just another aspect to his remarkable story.

Some will no doubt even hold up Taha as an inspiration, an example for us all to follow in working harder and making sacrifices to overcome adversity. The savage irony, though, is that the people most tempted to play that card as part of their “sunlit uplands” solution are also the ones most likely to have tried to deny Taha entry into the UK in the first place.

Taha had never dreamed of cooking anything until he arrived in Hull as a refugee. Growing up in Sulaymaniyah, next to the Iraq-Iran war zone, his goal was to provide for his parents, four brothers and two sisters in their small home where the floor became muddy when rain poured through the roof.

With his father’s blessing, Taha left in search of a better life. He found some seasonal work in Hull and discovered restaurants when a friend asked him to help out with the washing up at La Scala in Beverley.

He gained further experience at Italian restaurants across Hull and some London establishments, with a sous chef role at the acclaimed Sushisamba, but Taha wanted his own place and the opportunity came at Piccolo.

He invested his savings and, with business tough, watched them dwindle to the point where he was preparing to take offers for pots, pans and crockery, but someone walked in and booked a table for 20 just days before the sale. Piccolo was saved.

We felt just a tad traitorous perusing the choices of pasta and pizza, and starters including arancini, mozzarella, antipasti and more on the eve of a big match between England and the Azzurri, but there’s much more to Piccolo than run-of-the-mill Italian.

Taha told me a while ago about the time one of his staff revealed she couldn’t take her parents to Piccolo because her dad wanted a curry. It reminded him that the sign outside still said Italian, but only because he couldn’t afford to change it. Eager to show he could cook anything from fresh, Taha kept the sign but changed the menu. His spicy Mediterranean curry comes with beef fillet, chicken, shellfish or as a veggie version and you’ll find plenty of other excellent, non-Italian options on the main menu and the specials board.

We haven’t made enough visits recently to identify a firm favourite but the shortlist must include the Agnello – roasted rump of lamb with braised red cabbage, broccoli puree, potato dauphinoise and a red wine and plum jus – plus the Branzino Ripieno, starring sea bass stuffed with crab meat, ginger and lemongrass mousse.

Pescatori di Pasta Nero is a seafood feast with pan-fried sea bass accompanied by king prawns, crab meat, fresh mussels and a tickle of chilli in a tomato and shellfish bisque. No black squid ink pasta strips when we went but tagliatelle ticked all the boxes. Ravioli di Maiale is testament to Taha’s pasta making skills with his home-made parcels stuffed with pork tenderloin and sitting in, but not soused by, a delicate chilli marrow butter sauce with crispy prosciutto adding some crunch.

The bread is home-made, the team is hand-picked to serve in a knowledgeable but not nagging manner, and the only things holding them all back are the limitations imposed by the premises – classic Avenues red-brick terraced, with more seats upstairs than on the ground floor and a steep, narrow staircase to connect them.

But to fix that would cost far more than the business could sustain, and relocation would take a lot of the charm out of Chanterlands Avenue. When I moved to Hull in 1980 I lived just around the corner and the street had next to nothing, but over the years it’s begun to buzz although not, thankfully, to boom.

The Avenue pub has evolved into a busy and willing community local. Cognac has captured a sizeable and enthusiastic following, Bengal Pride is one of the best curry houses in the region and there are promising reports about Maya Spice, the latest arrival. Per Te remains hampered by the issues highlighted at the top of this piece, but has the potential to add to an impressive array of dining options if someone can find the wherewithal to take a chance on Chants.

“It keeps things hot and cold.”

“Two cups of coffee and a choc ice!”