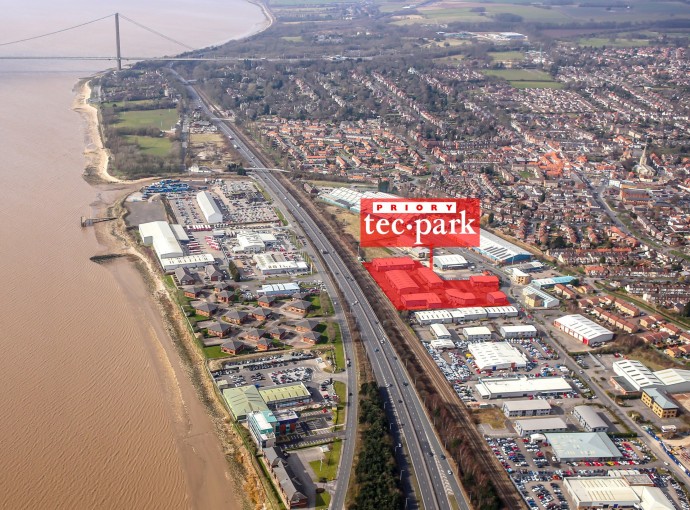 Priory Tec Park was built by Allenby Commercial more than 25 years ago and became available after the company decided to increase its investment in other properties on both sides of the Humber. The opportunity is a good fit with Castle Square’s strategy of expanding on the north bank.
The site comprises 50,000 square feet of predominantly trade counter and industrial accommodation with a selection of office units on an overall area of three acres at the western end of Priory Park. It is fully occupied with tenants that include Wolseley, City Plumbing, Signs Express and Shield Security and which are unaffected by the deal.
The wider Priory Park site extends to more than 150 acres and runs alongside the A63 Clive Sullivan Way. It is recognised as one of the region’s premier business parks by Henry Boot Developments and has become a hub for motor dealerships and other businesses include Arco, Royal Mail and the De Vere Village Hotel.
Lincoln based agents, Banks Long & Co, acted for Castle Square. Managing director Tim Bradford said: “We have been searching for a quality trade counter and office investment on the north bank of the Humber for a few months as we see this area continuing to grow due to its strong strategic credentials.
“This scheme has been developed and managed to a very high standard by Allenby Commercial and we look forward to continuing in the same vein for Castle Square Developments. “
Carrick Real Estate and Garness Jones acted for Allenby Commercial, who were based at Priory Tec Park before moving to Hull city centre in 2016.
Andrew Allenby, managing director of Allenby Commercial, said: “We are delighted to have completed the sale to Castle Square and we are pleased that the buyer shares our ethos of working closely with tenants and taking a hands-on approach.
“We are passionate about providing businesses with highly functional and stylish workspace and we are committed to developing more property in and around Hull as part of our strategy of promoting inward investment and job creation.”
Earlier this year Allenby Commercial completed the acquisition from Henry Boot of The Point, a 6.45-acre site at the eastern end of Priory Park which is the final piece of the site and is being developed as trade counter space and industrial units.
Developments in Hull city centre include Minster Corner, which will soon be occupied by APD Communications following an extensive redevelopment, and the iconic Europa House, which will undergo a major refurbishment after being acquired last year.
WORX at Blundells Corner in Hull is now nearly full, with businesses which include Arco, Hull Daily Mail, life insurance business Promis Life, Springboard children’s nursery and leisure operators Mad Volume Climbing and Planet Gym.
Allenbys are also continuing the renovation of Danish Buildings in High Street for use by creative businesses and the revitalisation of the Victorian retail units in Paragon Arcade. The company also owns and operates the Hideout boutique hotel, converted from retail units and offices in the Old Town of Hull.