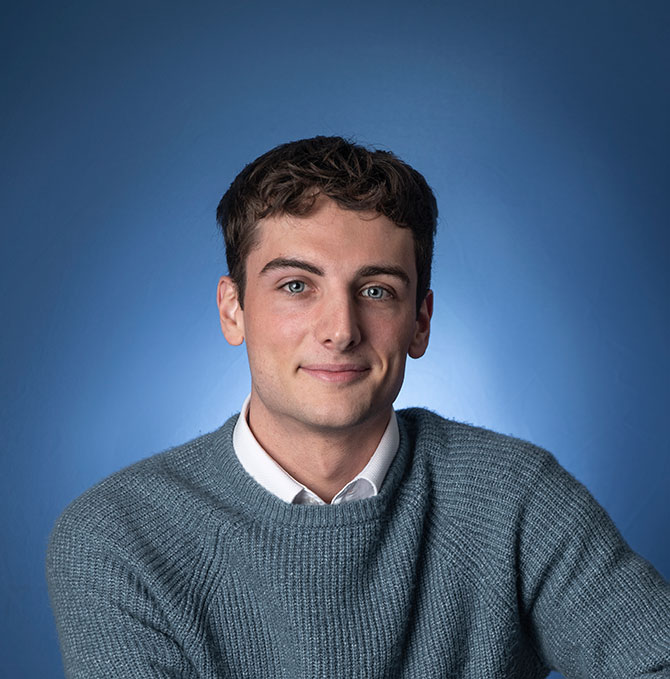 At just 21 years of age, budding property innovator James Graham has quite a lot on his plate. Not that it seems to faze him too much.

“Everyone in the business is older than me. You could say that ‘I am in charge of 14 people’ and I am the youngest by two years….every day is a learning curve. I always felt that I would not work for someone else.”

This personable Worcester-born ex public schoolboy was still studying for his A-Levels around four years ago when he came up with a bold business idea which has since mushroomed into an estate agency and conveyancing enterprise combining the traditions of High Street service with cutting edge technology.

The ODOS website spells it out quite clearly, proclaiming: “We believe it’s about time that buying or selling properties moved out of the dark ages and became stress-free. We believe that the current estate agency market requires a cost-effective solution, with a level of personal service which could be provided to a much higher standard.”

Just a few short years since James was still a King’s School pupil in Worcester, the brains behind ODOS (named after a mythical Greek God for property) is at the centre of a burgeoning home sales empire which has already clocked up monthly overheads of around £45,000. But James sees that as just the start….

“ODOS overheads are around £20,000 a month and Montrose Conveyancing is around £25,000 a month. You have got to take risks – I have people with mortgages, car leases, children to care for….if I mess up, then that messes up people’s lives.

“Montrose is already running at a profit. I would like to think that Montrose will turn over £1.2 million in its first year, and we are on track for that. ODOS is more of a slow burner….it will be a long time before I can sit back and relax with ODOS as we are still early on in our plans. But we will make a profit with ODOS this year.”

The figures are impressive for a business which might never have got off the ground at all if his parents had not decided to sell their detached home in Worcester back in 2017 to move to Hereford.

“They were selling the family home and I was thinking: “You are receiving such a poor service.” They never knew what was going on, they were extremely stressed. It was partly communication problems – they never understood what was happening.”

As Andrew and Penny Graham waited anxiously for news of their house sale, the future career path for their teenage son was slowly emerging as he worked with a developer in Birmingham on a software programme to make the selling process more transparent, hassle-free – and cheaper.

“I developed the software on a computer at home. It is a dashboard which allows clients and agents across the country to access it. Our business model is quite different – it’s a hybrid model, we have got an office in Newent, Gloucestershire, which opened two years ago.

“One of my father’s friend is a business owner in Worcester and he decided to invest in the idea and put some equity into the company. I felt that if I have got the opportunity at such a young age, I have got to run with it.

“It was just me at that point. I was learning how to run a business and become an estate agent at the same time, which was difficult. We started trading two years ago and we are already looking to upsize and move. We have got seven people at ODOS now, four of them on a commission basis.

“I set up ODOS for a year and then we realized that one of the most difficult parts of the property selling or buying process was providing quality legal services, so I set up a residential law firm, Montrose Conveyancing.

“ODOS was always set up to be a nationwide estate agency and that is where we are taking it. But did I think I would ever have a property law firm? No.”

It is a measure of James’s insight into the evolving world of selling houses – a sector which, like others, from High Street retailers to the mass media, had already been disrupted by online innovators such as Purple Bricks – that he realized quite early into the ODOS venture that his hybrid 21st century model also needed to refer clients to a quality, traditional property law firm enabling the property buying and selling process to be much easier for clients.

“We needed to set up a property law firm and the Council for Licensed Conveyancers quite rightly gave us lots of different hoops to jump through. It took about a year in total to get licensed, a great deal of work, I had to get lots of expertise on board. We wanted everything to be transparent while providing a good service.

“We managed to get the ex – CEO of the CLC as a director and mentor, Thomas Horrocks, and he is now on the board. I was very nervous about meeting him, but he is an extremely down to earth and professional character, we all get on very well.”

Montrose has already grown to a staff of eight legal employees whilst playing a crucial role in the ODOS story. “It has been absolutely crazy, Montrose is now working with some of the most successful, inspiring market leading estate agents and mortgage advisors across the Midlands, because of our excellent customer services levels and speed.

“A lot of conveyancing firms appeared quite slow; they didn’t have the technology to speed things up. I find it is difficult to recruit qualified conveyancers because the industry is currently so busy, although we are starting to see some inquiries from potential staff as they buy into our relaxed, professional environment and customer-centric vision.”

For a businessman of his still tender years, James is sanguine about the realities of running an estate agency business in his early twenties whilst also leaning on older heads to help steer a path through the complexities of house transactions.

“A woman I have just taken on as a partner in Solihull wanted to work for us because she likes our culture and drive. Currently I am the youngest and the oldest is mid-60s. Quite honestly, every day is a learning curve – I learn something every day.

“Just say you can do it, work out how you can, never look for excuses, then roll your sleeves up and crack on, as my father would say. My average working day is 7am to 8pm, and weekends are a bit of a rarity. It is an industry where you must work long hours. I have been negotiating on Sunday evenings before people go off on holiday.

“I have always been fairly good at managing people, we have a great culture in the office, there’s such a good team. I can talk to people and have always had a good work ethic. I have worked hard at a few jobs, bike repairs, I was a newspaper boy, a carer, worked in pubs…..I just like work to be honest.”

With youth still very much on his side, James is yet to encounter the fear factor that so often comes with age for so many in the workplace in an era when the speed of technological change can be positively bewildering, especially for older generations.

Then again, the very idea of ODOS grew out of computer software, ultimately enabling sellers and buyers to be guided through the entire process via smartphones. “I love technology – I did a cyber security course when I was 16, I have always been fairly competent with technology.”

And, at times of difficulty, he can always turn to his father Andrew for advice and guidance, after Mr Graham Senior came out of retirement to help his son with the ODOS project.

“My father was in the Army, then he was in the police over here, before working for the Government at the Home Office and later went into business. He had a consultancy business, then retired and spent a lot of time working with various charities.

“I still learn from him. We are like brothers; we get on very well. He always wants to keep busy and he loves coming into work here. He is Head of Finance and Admin and essentially now runs Montrose Conveyancing with our amazing Head of Legal Practice, Katie, as I have decided to have very little day to day involvement.”

And the family environment is enhanced further by the skills of James’s older sister Sarah, 24, who is training to be a full-time licensed conveyancer at Montrose after gaining a Master’s in Marketing.

Meanwhile, James’s mother Penny completes the family line-up by working on the books one day a week. “She comes into the office one day a week and does the accounts, still telling me what I can and can’t spend! We are a very close-knit family which enables us to work together….it is a good culture, a fun environment.”

That culture is already paying dividends, with growth plans in the pipeline. Says James: “We have massive plans for the future. I want ODOS to grow to 20 partners across The West Midlands, and then eventually to 50 nationwide.

“I really enjoy focusing on how to grow the business. We are expanding ODOS with new commission-based roles, we are recruiting in Warwickshire, Coventry and Dudley. We are expanding where we are already operating in Herefordshire, Gloucestershire and Worcestershire but we have also sold properties across the nation from London to Scotland.

“We are employing people who are fed up with the traditional High Street estate agency model. The industry is not very lucrative unless you are involved with very expensive properties. Our partners earn a great commission and run a patch – we give them the marketing, providing them with leads. They are franchisees, in effect.

“There is no shortage of estate agents – I think there are going to be a lot more on the market soon.”

James says Covid-19 has undoubtedly affected the day to day operation at ODOS “but in a good way.” “It has shifted how people use technology. The future model for estate agencies has been accelerated – there are some High Street agencies which are now unfortunately struggling.

“The online sector is growing in estate agency but there will always be a place for a face to face service. With us, it is a complete service, some call it a hybrid estate agency.”

But that hybrid model is subject to constant evolution. “We are constantly innovating, there is always room for innovation. There have been so many lessons already – the key really is persistence, getting the CLC licence was hard, but we got there and we are going really well.”

Meanwhile, James says he is relishing the challenge of bringing his business plans to fruition just a few years after watching his parents struggle with their house sale. “I love the fact that I am in control of my own destiny. I love going to work every day…I am learning lessons from all the people I work with.

“People expect a lot and rightly so because you are dealing with people’s biggest asset. There is pressure but that is not a bad thing. Every day when I get in in the morning, I make up a list…..the list keeps getting longer.”