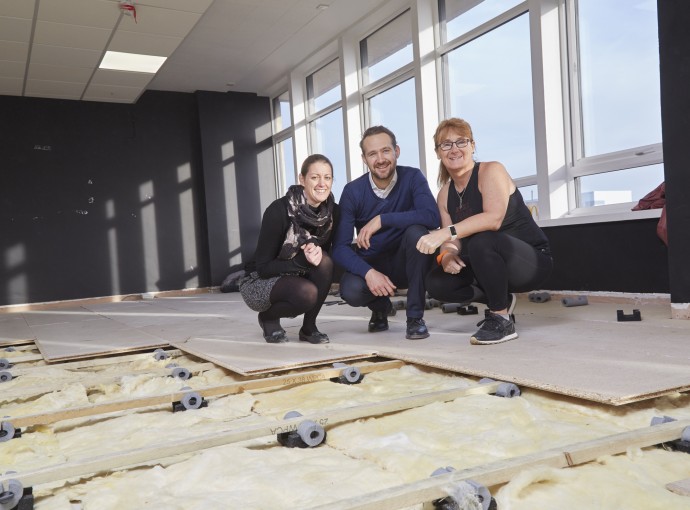 A new fitness space specialising in group exercise classes will open in early 2019 at K2, the £7m multi-functional workspace complex in Hull city centre.
City Group X will be based on the fourth floor of the building and will house two studios dedicated to well-known Les Mills workouts, including martial arts-inspired Bodycombat, barbell class Bodypump and studio cycling experiences RPM and Sprint, as well as studio bootcamps.
The venue will also offer Les Mills’ latest immersive cycling experience The Trip as a virtual class, with plans to introduce a live version of the class later.
The City Group X concept has been developed by local freelance fitness instructor Rachael Duff, who was inspired by the growing demand for health, fitness and wellness facilities in the workplace.
Rachael, who also works as a freelance management consultant, was inspired by boutique fitness studios in London, which specialise in group workouts, to set up a new venture that brings together her love of exercise and her business management skills.
Rachael said: “Wellness in the workplace is a concept developing in cities across the UK, with employers offering lunchtime yoga sessions and gym memberships for employees. It’s something I wanted to build on in Hull with group exercise sessions, where people can just turn up and do a high-intensity class, either before, during or after work.
“We have a lot of leisure centres and round-the-clock gyms in Hull, so I wanted to bring something a little different to the city centre, to complement what we already have. Not only will City Group X be great for the health and wellbeing of those working in the K2 complex and surrounding areas, but for anyone who enjoys the thrill and reward of group exercise.”
City Group X will run about 50 classes a week, from Monday to Friday, between 6.30am and 8.30pm, including virtual sessions that can be undertaken without an instructor. All classes will be available to book online and through an app.
K2 is being developed by Tradepark, based in Beverley. The first occupants moved into private offices and co-working spaces in February 2018. Since then, Sky Garden rooftop, Lion Heart Hot Yoga studio, hair salon Cook Hair and deli and coffee house K2 Eats have opened at K2. Work is continuing on craft beer and coffee shop Brew, Icarus Lounge events space and Indian restaurant Arisi, which are due to open over the next few months.
Mark Butters, director at Tradepark, said: “The idea behind K2 was to create a multi-functional workspace with a focus on wellness. That’s why our plans incorporated health facilities, such as a hot yoga studio and fitness space. We’ve created two studios with acoustic floors and walls to house City Group X’s cutting-edge group exercise concept. We’re looking forward to it opening early next year.”
For more information about K2, visit www.k2bondstreet.co.uk