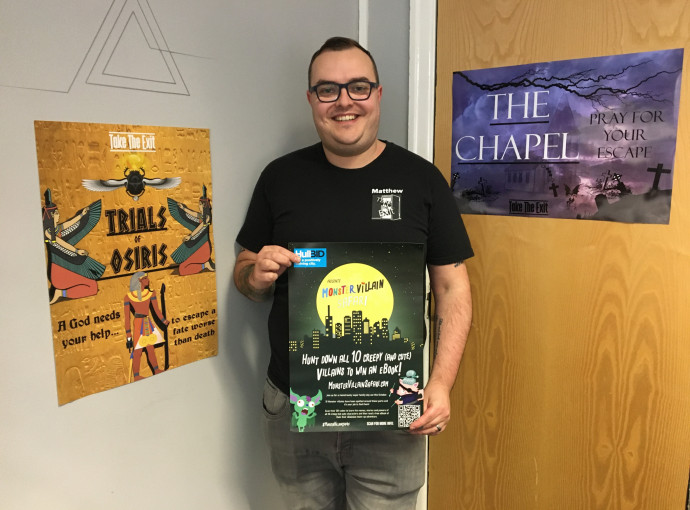 Organisers of the MonsterHero Safari are also planning a festive version of the trail, which will become one of the city centre’s Christmas attractions.
The MonsterVillain trail was launched at the beginning of October and will end on Halloween on Saturday, October 31.
The summer trail took place in more than 100 towns and cities across the UK and Hull was in the top 10 with around 200 people taking part.
The new trail will again work by using contactless QR codes, without the need for families to download or sign up to anything. Vinyl window monsters have been placed in 10 businesses around the city centre for families to hunt down and scan on their smartphones to learn about each character’s personality and find out their names, stories and powers.
Participants who track down all 10 MonsterVillains will be rewarded with a free eBook containing a follow-up adventure written specially for the trail.
Among the businesses taking part in the trail is Take the Exit, where owner Matthew Greenacre (above) says the initiative is a great fit with the mystery surrounding his escape room games and will raise the profile of the company at an important time.
Matthew, who launched Take the Exit in 2018, said: “Our location isn’t very high-profile – it’s a door and a hanging sign in Silver Street – so the MonsterVillain Safari is a great initiative to help us promote where we are and to encourage people to come into the city centre and do something that’s safe and different.”
Take the Exit is still open six days a week but has reduced the number of bookings to allow more time for a full clean of the escape rooms between sessions. Now Matthew has come up with ideas for new attractions based on his experience of touring the UK and visiting escape rooms which just weren’t scary enough!
He started with a Doll House theme which is now only rated as medium difficulty after the addition of a medium-hard Chapel Escape Room – investigating an abandoned chapel and mysterious deaths – and a Codename: Exit Escape Room, which is a challenge rated as “hard” to bring back some missing diamonds.
The latest addition is the Egyptian-themed Trials of Osiris Escape Room which is a family friendly adventure. All rooms are Covid-safe and Matthew has also added online escape games which can be played at home, with plans to launch escape game boxes ready for Christmas.
Matthew said: “Some of the online games can be played across multiple households and the boxes are ideal for playing at home. There’s a ghost box game and we’ll have something new in time for Christmas.”
Kathryn Shillito, HullBID executive director, said: “It was great to hear that the MonsterHero Safari was such a big success and attracted a lot of families into the city centre to enjoy a trail which they were able to complete in safety.
“MonsterVillain Safari again features cute and colourful characters but this time with a creepy Halloween angle. It’s a proven crowd-puller and we’re delighted that so many businesses have signed up to take part.
“As Matthew said, it’s a great opportunity for businesses to raise awareness of where they are and what they do. It also shows people the safety measures that businesses are putting in place and some of the innovative ideas they are coming up with to sell their products and services in a different way.”
The other businesses taking part in the MonsterVillain Safari are Fun Station (St Stephens), HEY Credit Union (Brook Street), Mascarade (Paragon Street), Homestead Store (Paragon Arcade), Superbowl UK (Princes Quay), Watt2Wear/Carol’s Classic Creations (Whitefriargate), Hull Trinity Backpackers (Lowgate), The Deep (Tower Street) and Social (Humber Street).