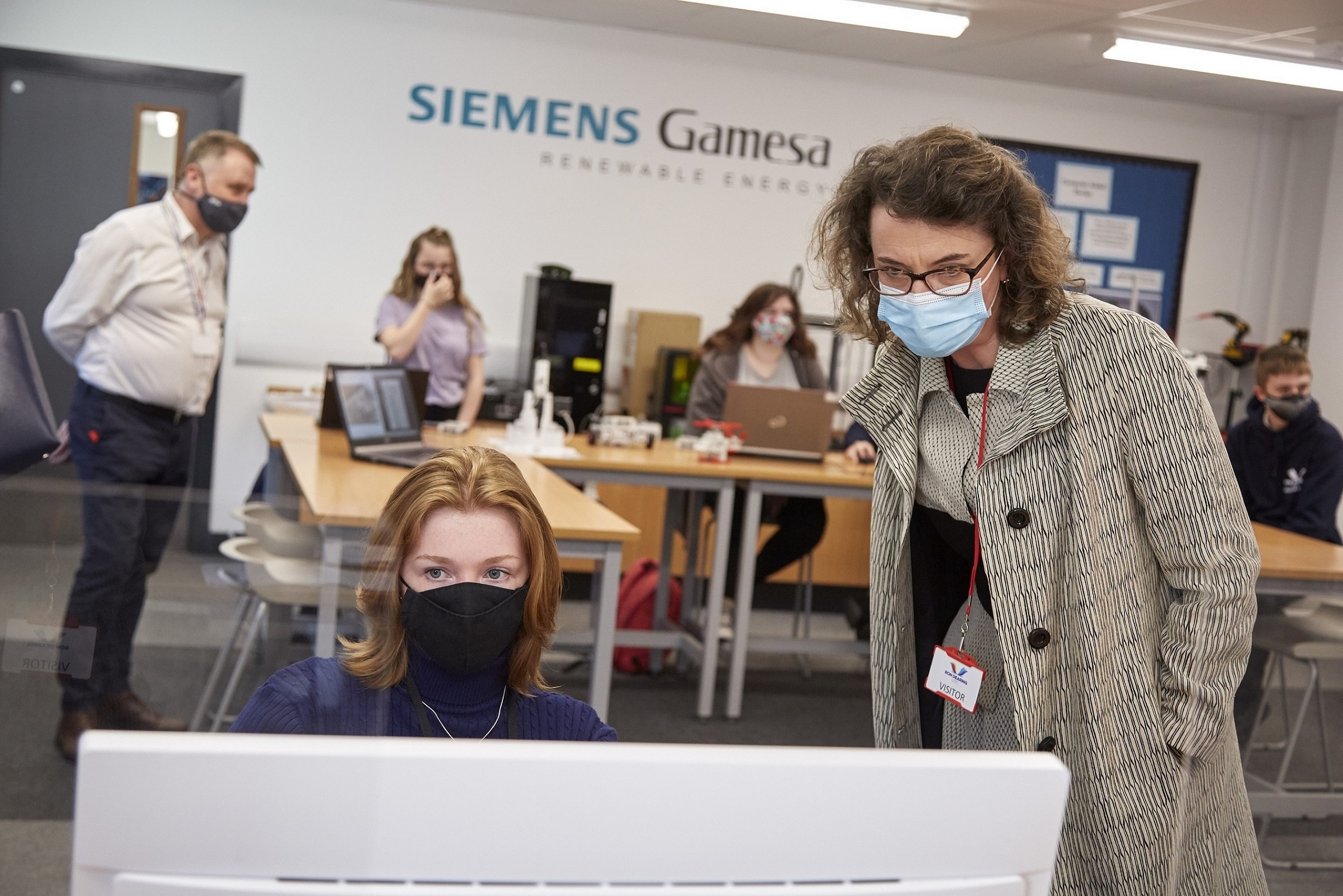 A government minister has visited Hull’s Ron Dearing University Technical College (UTC) for a first-hand look at outstanding employer-engaged education and to discover the keys to its success.

Baroness Berridge, minister for the school system, was joined on the visit by Carol Gray, the Department for Education’s regional schools commissioner for the East Midlands and Humber.

The Conservative peer and Mrs Gray met a number of current Year 13 students, all of whom have secured exciting Level 4 and degree apprenticeships.

All the young people spoke passionately about why they chose to join Ron Dearing UTC and how the curriculum, which combines academic and technical qualifications, has enabled them to acquire the qualifications, skills and experiences sought after by industry.

Year 13 student Scarlett van Raamsdonk, 18, who recently secured a degree apprenticeship in the Merchant Navy, was also among the students who met the minister.

Scarlett said: “It was really nice to meet Baroness Berridge. She is also the minister for women and is very interested in women in science, technology, engineering and mathematics (STEM). She was really positive about Ron Dearing UTC and it’s nice she was so interested in what we had to say.”

The minister and regional schools commissioner also visited the UTC’s engineering design department where they met current learners who are working on virtual reality and 3D printing projects.

Baroness Berridge said: “It was wonderful to meet some of the students, staff and employers at the outstanding Ron Dearing UTC, where academic attainment and excellent technical education go hand in hand.  The students’ skills in technology left me feeling like a luddite and to see the commitment of the employers, including financial commitment, to the UTC is inspiring.”

Ron Dearing UTC principal Sarah Pashley said: “It was a pleasure to welcome Baroness Berridge and Carol Gray to our school. They were very interested in our formula for success and seemed to be extremely impressed.

“We are completely aligned with the ambitions of the Department for Education’s Skills for Jobs White Paper, including strengthening links between employers and education providers, placing employers at the heart of defining local skills needs and offering courses tailored to the skills needs of businesses.

“Ron Dearing UTC is the living embodiment of that philosophy. Our education model provides a blueprint for outstanding collaborative, employer-led learning which could be replicated across the country.”

These leading members of Hull’s business community explained why they were so committed to the school and the value they got from the relationship, including the opportunity to shape and hand-pick their future workforce.

Mr Spencer said: “We were delighted to be able to brief the minister on what Ron Dearing UTC has achieved and explain the absolutely integral role we, as employers, play in the school and its success.”