An Appointment With, Magazine

Making a distinctive mark in the shadow of the Malvern Hills 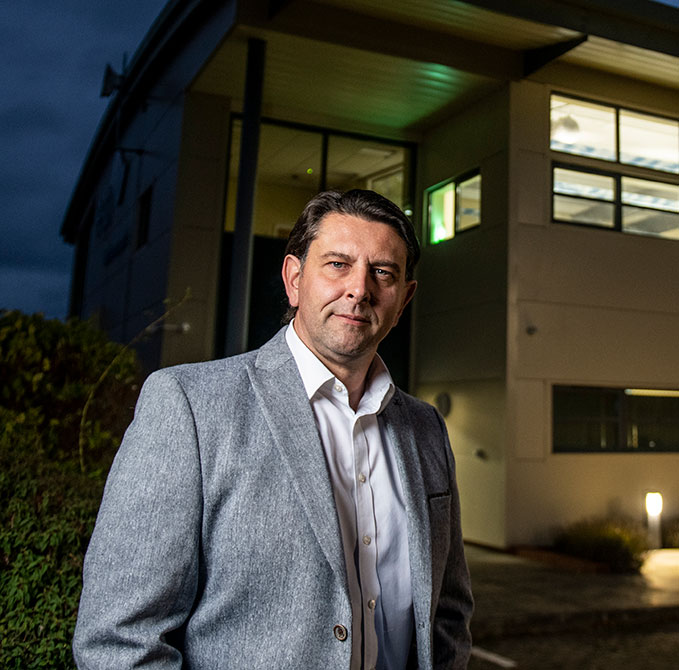 The list is long and highly distinguished…. Harrods, Lord’s, the BBC, the Tower of London, Hampton Court, Canary Wharf and many more….

No, not a beginner’s guide to exclusive national cultural landmarks, but all part of the client base, both past and present, of one of Worcestershire’s most intriguing companies.

The Sitemark story is a classic example of a firm which began in humble circumstances as a one-man enterprise and has since developed over the course of around 30 years into a UK market leader, with a 20-strong workforce and a turnover approaching £2 million.

But back in 1991 founder Mike Boxall had little idea that his decision to set up a small company supplying cleaning products would eventually mushroom into the UK’s foremost benchmarking operation for the cleaning sector, helping firms and organisations throughout the UK uphold hygiene standards crucial to health, not least over the course of the Covid-19 emergency.

It’s a classic entrepreneurial story, but the rise and rise of the firm which eventually became Sitemark owes much to a pivotal decision by a young Mike Boxall to branch out on his own as a cleaning products distributor in Worcester when the shop where he had been working folded.

“If it was not for that, I may have taken another job and followed a different route. I became self-employed on April Fool’s Day in 1991,” says Mike today, sitting in his spacious office headquarters in the heart of rolling Worcestershire countryside just down the road from the Three Counties Showground near Malvern.

The Sitemark saga has its roots in Cornwall, where Mike grew up in sleepy Perranporth, a picturesque port close to the popular holiday resort of Newquay on the North Cornish coast.

The teenage Mike Boxall had his first taste of working life in the Army in 1985 – but soon discovered that the military was not for him. “I joined the Army at 16, but I really didn’t like it. I did my training with the Royal Signals at Harrogate. It was quite a shock for a 16-year-old who had had a cushy life on the beach at Perranporth to find himself being shouted at by a huge Sergeant Major.

“I was jailed for having a dirty fork – they put me in the cells overnight, and you lost a day’s pay.” After just six months, young Mike Boxall was on his way back to Civvy Street.

Mike enrolled for the Government’s Youth Training Scheme – earning £29 a week – before landing a job at a firm in Truro which fitted car audio systems, giving him his first taste of the world of sales. “It was run by a guy called David Liney, he was quite inspirational, I learnt a lot from him about how to look after customers.

“Being the best was his mantra. I was 17, I did a bit of everything, fitting equipment, selling.”

After meeting his first wife, who lived in Oswestry, Mike left Cornwall and found himself in the Shropshire town on the lookout for work. He was taken on by a compression and garage equipment manufacturer in a sales role. “I left after a couple of years, I had really enjoyed it, I enjoyed dealing with people.

“I moved to Worcester when I was 19, looking for jobs. There was a shop in Worcester which sold commercial cleaning equipment. I wandered in and the owner said ‘I might have something for you.’ I was offered a permanent job.” The long process which would eventually give birth to the enterprise which grew into Sitemark had begun….but not before a life-changing moment for Mike.

“I had been there about six months when the business folded. They had customers that used to buy janitorial products and I thought I will carry on supplying. In April 1991, I fell into self-employment. I had not planned to do it, there was no big ambition.”

Mike had previously agreed to loan the owner of the business a sum of money which unwittingly put him on the route to lasting success in the cleaning sector, albeit many years hence. The cash was not enough to save the shop but as he reflects today: “That loan in fact turned out to be a real stroke of luck – I do not think I would have gone out and started a business otherwise.

“I was working on my own for three years. My firm was called Express Cleaning Supplies, based in Worcester. It supplied commercial cleaning products, mops, clothes etc to nursing homes, pubs, clubs etc – I was the distributor.”

A merger with another sole trader enabled Mike to draw up expansion plans – but the worldwide phenomenon which became the Internet was to become the gateway to success ahead of the new Millennium.

“Our business grew overnight. It was a really exciting time, we really got into the digital market. 90 per cent of our business was online. Most of it was UK-based selling to cleaning companies, hospitals, schools, colleges.

“The Internet transformed the business. For a number of years the market grew but then it got a bit commoditized, more and more price-sensitive.”

By 1999 the company responded to increasing queries from would-be cleaning sector operators by setting up an online forum providing guidance and help. It was a masterstroke, becoming the largest Internet forum serving the cleaning sector, with 36,000 members who have made 1.8 million posts.

“We still own and operate it and it helps people start new businesses. But the market had started to change and we were making less and less profit margins. We thought ‘is there a way we can charge for our advice?’”

As the online market became more congested, the sale of Express Cleaning Supplies proved a significant milestone in the Sitemark saga. “We had started focusing on product consultancy and helping improve the productivity. It was about trying to get people to invest in the right equipment.

“We developed a new consultancy business, i-Clean, and we set up helping people manage their cleaning services. It was an entirely different customer base, we were dealing with much larger organisations, such as Canary Wharf.”

As i-Clean’s reputation grew, the business model evolved further. “We developed a formal benchmarking processes. The i-Clean benchmarking was really successful and we later decided we could do the same with recycling and waste.”

By then the firm had attracted the attention of no less a figure than CBI Director General Digby Jones, later to become Lord Jones of Birmingham, and a man determined to use his national profile to help bridge the UK skills gap.

“When we approached him we said there was a lack of skills in the cleaning industry. That resonated with him, he was keen to get involved and invested in the business, along with others. He has been involved for 15 years now, he is an adviser to us.

“Benchmarking has become key. We spent a lot of money on systems development, we have some really clever stuff on data. We measured the work of 37,000 cleaners and 10,000 sites, from airports to zoos, measuring skills, how people are managed.

“We have grown to become the market leader in the UK. There are lots of consultants out there but very few do formal review processes. People are using our standards and our data.”

The Malvern firm’s long journey to national renown was bolstered further with the company’s rebranding as Sitemark in 2018. “i-Clean was quite restrictive and it became a bit of a problem when we began looking at benchmarking services.”

The switch to the Sitemark banner reflected the firm’s increasing concentration on benchmarking while a host of blue-chip clients – from the aforementioned Harrods to the Crown Estate and Canary Wharf to Lord’s – climbed aboard with the Worcestershire firm to ensure their cleaning practices were suitably shipshape.

“The bulk of our business is education – universities and colleges – but we have done work at the Tower of London, Banqueting House, Hampton Court, Harrods. We produced data for cleaning 50 artificial palm trees at Dubai Airport. We have just done a 10-year waste strategy for Canary Wharf to reduce carbon emissions by 97 per cent.

“The bulk of our business is still cleaning. We go into businesses and inspect everything, we look at their equipment, how they recruit and manage people – it is formal processes of measuring performance.”

Sitemark, perhaps not surprisingly given its sector, has found itself in demand during the Covid-19 emergency. “We have picked up a lot of business where people wanted to focus on hygiene, ‘is my business fit for purpose? is it Covid-secure? We do a lot of work in hospitals, where cleaning is obviously so important.

“Through the whole Covid security thing, we have had some great feedback from customers and the Health and Safety Executive. We always want to create a standard in cleaning that people would use and work to.

“Everybody is remote now. 12 to 15 people work out of here, we have data analysts, project managers, a sales team. We have been able to adapt, turnover is just short of £2 million at the moment.”

Mike, now 52, relishes the challenge of sustaining and growing that turnover 30 years after he first launched as a one-man band in Worcester. “It is not hard work if you enjoy it and that is the key to it. You are so involved in it, you want to see projects succeed.

“It evolves all the time. The business has been transformed and it is still transforming. It has gone from cleaning products to consultancy to benchmarking. They have all been stepping stones, the market has changed, and our business is helping people improve. The cleaning industry has never been so professional, important and significant.”

It’s been quite an odyssey for the man who first took the plunge and set up as a one-man enterprise back in 1991 after the Worcester shop where he worked had to shut its doors.

“If you look at where we have come from when I started in 1991, I used to keep all the cleaning products at home.”