Luxury living – without the hassle 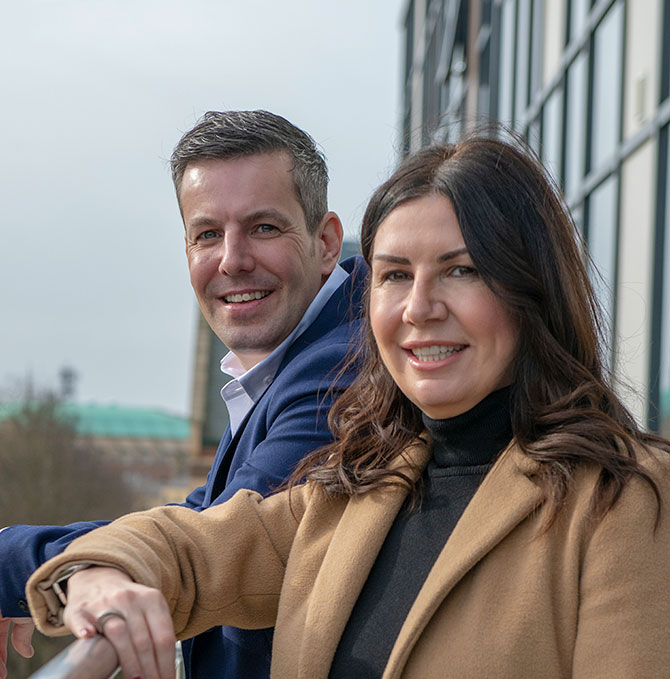 When MyPad’s Danny Gough met Nikki Blowers of Eazy Rooms, they realised that, together, they could bridge the gap in Hull’s serviced accommodation market – and MyPad Serviced was born. By Sam Hawcroft

A decade ago, if someone had told you that there was a market for luxury serviced apartments in Hull city centre with a price tag well north of £3,000 a month, you’d have laughed and wondered whether they were quite all there.

But the fact there is exactly such a thing now, with demand continuing to push up prices, demonstrates just how far the city has come in recent years as both a tourist attraction and a place to do business.

MyPad was founded in 2002, and Danny Gough become a director in 2008; back then, the company was focused on student landlords. But in 2012, Danny expanded to take on larger projects, one of which was Anchor House in Anlaby Road, a former derelict building that was transformed in a £2 million investment by Westfield Homebuyers.

That was around the time he met Nikki Blowers, who had worked in regeneration for Hull City Council for many years before a stint at a large property developer. It was while she was living in Ascot for a time that she came up with the idea for what originally started out as Eazy Rooms, and which, in December 2021, was brought under the MyPad Serviced banner.

“A friend was doing something down in Berkshire and wanted my help to create this student serviced model,” says Nikki. “So we did it – and when I moved back to Hull, I reconnected with a lot of my old council contacts who said there was a need for such a hybrid property offering – not just B&Bs or hotels, and not just straightforward residential.”

The idea was to start off slowly with one or two properties – but the first client ended up being Yorkshire Water, and the second was another blue-chip company. “And it went from there,” adds Nikki. “I met Danny through that, because he was the managing agent for this particular developer.”

At the outset, it was much less about the property than the service, says Nikki. “From something that would have just been a basic room, suddenly we could provide that room with everything that went with it, with all the bills inclusive and no hidden extras – we were there to help people expand. You could come back to Eazy Rooms as one port of call and we created something that was very flexible.”

“They did whatever the client wanted,” adds Danny. “So not only the laundry, but the catering, bespoke transport… whatever they wanted, Nikki would go out and sort it for them.”

“That was the key to it,” says Nikki. “We tailored the packages to fit the client. As long as we had a property to work from, we could put a package together that meant they had a permanent base; they weren’t checking out of a hotel on a Friday to come back into a different room, having to move all their belongings – it meant that they had really good accommodation at a really reasonable price, but with a fantastic service and all the bolt-ons that went with it, and me and the team on hand for any inquiries and anything else they needed.”

The demand for luxury serviced accommodation really began to gather pace in 2015, says Danny. Which is probably not surprising, as this was a key point in the timeline of Hull’s economic development – that year, the Siemens Gamesa factory received planning approval and the company began its recruitment drive. “People wanted to come to Hull, but they didn’t just want to stay in an HMO,” he adds. “But then developers started to do en suite rooms, changing offices into luxury flats or studio rooms. And that’s what people want now. So if somebody is here for the next two years, working on a project, they want something that’s reasonably priced, smart, and in a good location – and the city centre is booming now.”

A lot of the properties managed by MyPad are in the city centre – including the stunning Glass House development that overlooks Queen’s Gardens – and bringing Eazy Rooms into the fold proved to be the perfect partnership. Nikki has all the contacts for the service providers, while Danny knows most, if not all, of the developers in Hull. “If someone rings us and says they want 200 apartments,” he says, “we can get them. Whereas if they ring a traditional estate agent, for example, they won’t be able to do it. They might have one or two empty flats. But we deal in having the whole building so we can tailor it to whoever we want.”

Nikki stresses that a crucial part of their offering is “putting people together”. “We don’t just say we’ll put one person over there and another somewhere else – we have the full houses, the full developments to work with. So, from the lettings point of view, which Danny was offering, and the servicing, which Eazy Rooms was offering, we had this need to make sure that everybody was together – and that’s something we’ve been able to do really, really well.”

There’s inevitably a bit of competition now, but MyPad Serviced takes the offering to a higher level. All of its developments include bedding and towels, kitchen and bathroom essentials, and DBS-checked staff, while some properties feature gyms, security guards and even cinemas. Lets can be from just three days to long-term, and there’s a 24/7 helpline if anything goes wrong. “A lot of service providers have HMOs, say, in Boulevard, or Ryde Street – and, while we have those kinds of properties too, we provide a better standard of property for the same price,” says Danny. “Imagine an eight-bed en suite development in Plane Street – it might be amazing, but it won’t have eight parking spaces outside; it won’t have CCTV, for example. And, ironically, the deal Nikki can do won’t be any dearer – because we work directly with developers.”

One such developer has already spent £48 million in Hull and is set to spend double that in the coming years, and Danny says they are constantly approached by companies looking to do all sorts of accommodation. “When a developer comes into the city who doesn’t know much about the market,” he adds, “we can actually help them build it to a certain standard or a set way, so it suits Nikki’s clients perfectly.

Nikki gives a one-to-one service for the corporate client, which means that, if they are renting out 20 apartments, the developer only has one contact to manage, instead of 20 separate tenancies. Meanwhile, Danny is the developer’s single point of contact – and he encourages them to come to MyPad before they even start their project. This is because, he says, “they might go and put something in that’s not fit for purpose, or we can tell them whether their price point is right. Rents are going up in Hull – the city is becoming popular. Supply and demand is tipping the other way a little bit. A couple of years ago there were more properties than people, and now we’re heading towards more people than properties, but that means the great thing is the developers are going to come to Hull, and then they’ll come across MyPad.”

They’re in the enviable position of hardly needing to shout about what they do, Danny says. “MyPad doesn’t advertise for developers, and MyPad Serviced doesn’t advertise for clients – they come to us. And when they ring us up, Nikki builds a package to suit their requirements. Developers are now looking all over the city centre, and it’s a bit harder to find property there now, but Nikki’s just found an amazing development on Freetown Way – it’s high-end, with some very futureproof tech in it. Again, it’s a bespoke place where all the clients can stay together, and that developer approached us, with a view to the client being the preferred end user. So we’ve put the package together, and we’ll work with them until the very end.”

When asked whether their personalities complement each other, Danny laughs. “We’re both driven, we’re both determined, we can both be fiery and we can both want our own way. So that’s a challenge!”

But the overriding message, says Nikki, is that, despite the impression people may have of corporate clients having megabucks to play with, MyPad isn’t out to exploit them. “I’m very keen to work with people to manage their expectations and their budgets, so they don’t bring their workforce to Hull only to end up paying over the odds for things.

“We want to give them a great service, a fantastic property and be on hand all the time for them. I think the corporate clients we’ve had in the past would agree that we do that. We’re all about making it as beneficial for them as it is for us.”