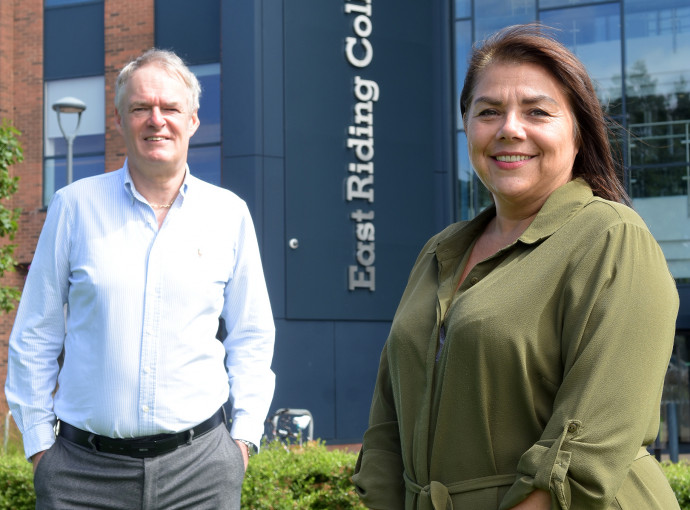 Local businessman Mr Wright joined the board of governors at the college 15 years ago when the Beverley campus was based at the old Gallows Lane site and before the current Bridlington campus was built. A long-term property strategy, a drive to improve quality and guarantee the college’s financial future will prove to be his legacy.
Mr Wright has held the high-profile voluntary role of chairman for the past five years, after previously serving as a business governor and chairman of the Remuneration, Finance and Human Resources Committee since 2009. The voluntary unpaid roles have a wide range of responsibility and accountability, which Mr Wright balances with the demands of running his own business, Communique Advertising.
In a message to staff he said, “I believe I leave the college in a better position than when I took on the chairman’s role. We have a great estate and our performance on curriculum delivery and development puts us among the top 20-performing FE colleges in England. Our financial future is also more positive, especially with the planned merger with TEC Partnership.”
“While the sector will still provide its challenges, I believe we are set for great things and I look forward to saying, ‘I was part of that success.’”
Mike Welsh, principal of East Riding College, said, “Simon has given many years of dedicated service and hundreds of hours of his time on a voluntary basis. He has been tenacious in his desire to develop the college’s vision and his strategic guidance has been instrumental in the improvements the college has made over the years. As a member of the business community Simon has championed the college’s work with employers and its mission to lead both social and economic development in the region.”
In addition to his responsibilities as governor and chairman, Mr Wright was a member of the project task group that oversaw the development of the college estate. Since 2010 the college has delivered two successful major capital developments and established state-of-the-art learning facilities at both of its main campuses in Bridlington and Beverley.
As well as his formal chairman’s responsibilities, Mr Wright frequently gave his time to meet students and understand their college experience, as well as supporting them at many celebrations and awards ceremonies.
He also helped lead East Riding College in its mission to find a merger partner, resulting in the college joining the TEC Partnership – one of England’s largest and most successful providers of further and higher education – from August 1, 2020.  Kerri Harold, current member of the board of governors, will become the new chairman of the local East Riding College board within the newly merged organisation. As part of the TEC Partnership the college will retain its influence, identity and ability to deliver its mission within the dynamic of the wider partnership.
Ms Harold, who will be East Riding College’s first female chairman, has served previously as the board’s local authority member, vice-chairman, chairman of the Search, Governance and Development Committee, and is the nominated governor for safeguarding and prevent. She is a local councillor, covering the Minster and Woodmansey ward in Beverley.
She said, “I’m delighted to be taking over the reins and picking up the role and responsibilities of chairman from such a highly effective predecessor. Simon has been a tour-de-force on the governing body and his passion for further education and driving the success of the East Riding as a region is clear for all to see.
“I too am passionate about the contribution the college and our students can make to our local communities and the region’s future success. I am looking forward to representing the college as part of the now larger and even more influential TEC Partnership.”