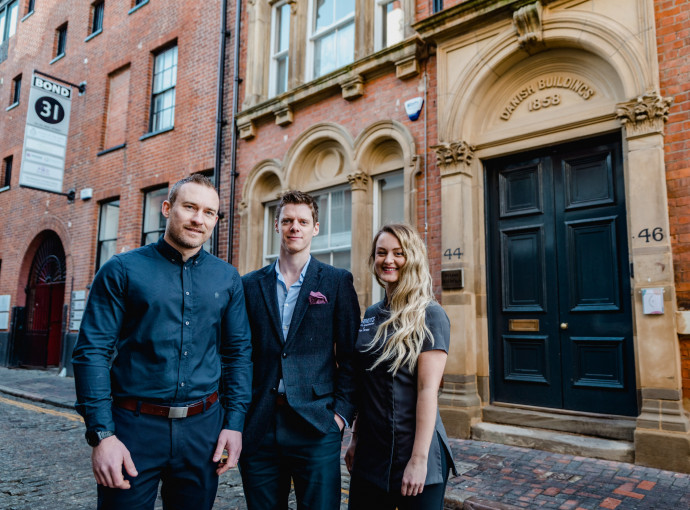 SAAF Education recently moved into Bayles House, which sits behind Danish Buildings in High Street, Hull, and is one of Allenby Commercial’s most ambitious projects.
They will soon be joined by RENOTS, a new business launched by Megan Stoner after she decided to branch out with her fitness and rehabilitation services.
Allenby Commercial acquired the site in autumn 2017 as it built a portfolio throughout Hull city centre of landmark properties of character which now include Paragon Arcade, the Hideout Hotel, Worx at the junction of Beverley Road and Spring Bank and Europa House, now undergoing transformation as Monocle.
Danish Buildings, which includes the Grade II listed Bayles House, was constructed in the late 17th century and altered in the 18th and 19th centuries. Bayles House was listed in 1952.
The Allenby plan to breathe new life into historic buildings and generate jobs by attracting creative businesses brought grant support from the Government’s Local Growth Fund, with £250,000 secured by the Humber LEP as part of the Government’s commitment to the Northern Powerhouse.
The result is a mixed range of studios, from 160sq ft up to 1,200 sq ft, with shared spaces including kitchens, courtyards, break-out areas and a striking summerhouse meeting room which are all free of charge to use for tenants.
Film companies, photographers, marketing agencies and architects were among the businesses which relocated from other sites in and around Hull to a new home in the heart of the Old Town.
SAAF Education, which employs about 25 people in providing financial guidance and business support for schools, academies and free schools from its base in Nottingham, launched its recruitment arm, SAAF Supply, in Hull 18 months ago. Managing director Matt Lydon has expanded from two people to five and saw Bayles House as the ideal environment for further growth..
He said: “We hope to bring in someone else in the coming weeks and the new office has space for eight people so it will last us for a couple of years yet and there is room to expand within the building.
“We’d like to stay here because we see it as somewhere we can put our roots down. We always wanted something that’s a little bit different. I know the Old Town well and I used to live at the other end of High Street. I’m a big believer in the idea that a nice environment is good for people and their mental health.”
Megan has been developing her business RENOTS, within the Holiday Inn Hull Marina, for the past two years after graduating from the University of Hull in injury rehabilitation. She has had previous experience of working with leading health and wellness companies such as the NHS and Nuffield Health and has been looking to expand her business within Hull City Centre.
She said: “Bayles House is a nice, open and calming space and perfect for consultations with clients. I had seen what  Allenbys did with Danish Buildings, creating a comfortable space for people to work and I decided then I wanted to be in here. It’s a place where I can grow the business into a facility where people can reduce pain and stress.”
Paul Swallow, contracts/site manager at Allenby Commercial, said: “This has been a particularly important project for us because of the history of the building and its prime Old Town location. Danish Buildings and Bayles House both needed a lot of work when we bought them and we’ve had to be very patient but now the rewards are there for all to see.
“We’ve retained the original charm and character yet turned the properties into modern office and studio space and all the feedback we’ve received indicates that its an environment which fuels creativity and builds productivity.”