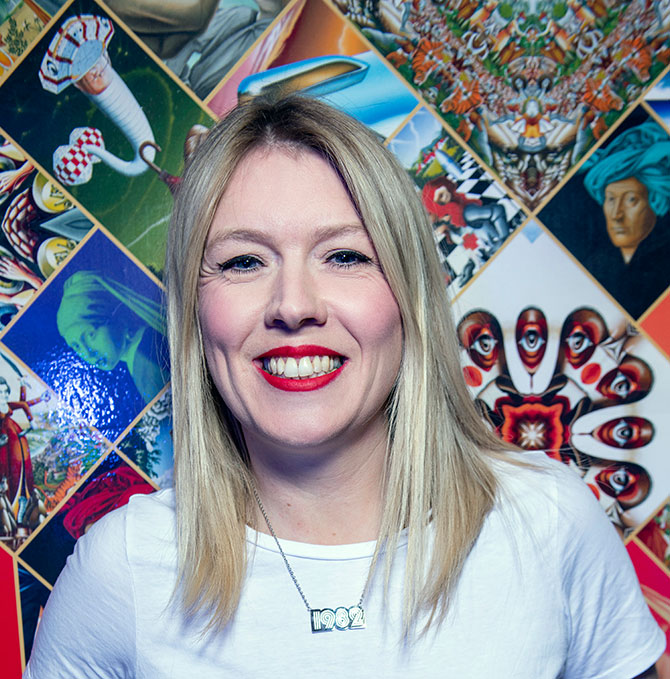 After starting his career at Hull heraldic arts firm Beaulah’s and going on to work for major design agencies in Leeds and London, surrealist artist Paul Sowden soon realised he wanted to build his own empire – so he returned to his home city and set up a design consultancy.

In 1982, this was pretty pioneering – Hull may be awash with all manner of creative communications firms now, but that certainly wasn’t the case back then. It was into this environment that Paul’s daughter Polly was raised and immersed in – and joining the family firm was a natural progression.

“I was brought up in a very creative and work-orientated environment,” she says. “My mum and dad have always worked. And that was an ethic that I remember from being very, very young. It was never spoken about me starting in the family organisation – it was an organic thing, just naturally part of my growing up.”

Even from the age of five, Polly felt part of the business, being involved in promotion shoots for a holiday homes firm that was one of Sowdens’ major accounts. At 11, she began a Saturday job at a florist’s, which she says “helped shape my need and desire to be in charge of something”.

Polly’s “grown-up” relationship with her father has also been key to her development and the success of the business. When she was a teenager, she’d go to the Welly Club with him on Thursday nights, and the social connection extended into the beginnings of a lifelong working bond, as he would often talk to her about marketing and the media.

“When I was young, I could never understand how a newspaper could be sold for 28p – and he would teach me the power of advertising and how the media was funded,” says Polly.

By the time she was 16, Polly was running one of the first continental coffee bars in her home area – but she needed a bit of extra income, so Paul asked her to come in and do the press cuttings. Of course, digital wasn’t a thing then, so this involved newsprint, magazines and a pair of scissors.

“I would be in charge of ripping out the pieces of PR and the ads out of big piles of newsprint – I used to look like a chimney sweep afterwards!” she laughs. “I’d just do that one day a week, and it went from there – I absolutely got a taste for it.”

Polly honed her skills by working across every department of the business, until she was offered a full-time job as a media buyer. “We did a lot of press advertising, as well as a lot of radio and TV. Nowadays a lot of it is very digital-oriented because there are a lot more channels, but back then social media wasn’t available to us. The more I worked with clients, the more I learned about their account, who their audiences were, and how to sell to them. And then I ended up becoming more of an account manager.”

Having worked across all aspects of the business stood Polly in good stead for when she would eventually become joint owner of the business in 2009. “I’ve worked in the PR department and the production department, I’ve worked on events and exhibitions, and I’ve worked in web, social media and every other department we have, which has allowed me to be able to run the whole company holistically because I’ve done it all. And if I don’t know how to do something, I’ll learn how to do it.”

As a team, Paul and Polly complement each other well. “It’s a good mix,” she says. “He’s a pure artist in the greatest sense, with brilliant business acumen and copywriting skills, and I bring the strategic side into it as well as creativity, along with our team – because we couldn’t do any of this without our people.”

People are the company’s biggest investment, she adds, and huge emphasis is placed on challenging – but also rewarding – the staff.

“We spend a lot of time working on this internally with our team. We want them to come and do their best work every day of their life, and enjoy it, too. And this leads to a better quality of service, a better creative product, and ultimately better results – because at the end of the day, it’s OK being creatively led, but it has to be backed up by intelligent strategy – it just has to be.”

In response to the rising demand for online services, the company recently expanded to include a team of digital experts, including digital account director Ryan Thomas. Polly acknowledges that finding the right people is more difficult in East Yorkshire than in the capital, but says that they are in it for the “long haul” with their staff.

“We’ve got a much smaller pool of people here than in, say, London or Manchester, and I think any agency would recognise that, but we’re after the special people – those who have got that edge, and when they come here, they learn a lot from us. And we hope to learn from them, too.”

Sowdens’ long history is one of its USPs, says Polly, and they have clients that have stayed with them for decades, as well as a formidable word of mouth reputation – all things that the newer crop of agencies cannot hope to match. But because they were established before the digital age, do they have to do more to prove they’re still relevant?

“What you get with that is experience that other companies simply can’t say they’ve got. And you learn from those experiences, you learn from the challenges that you’ve come up against during those times. It’s the mix of new and old, and we have continuously stayed ahead of the game. We wouldn’t be in business if we hadn’t. We were doing innovative marketing years ago, and part of our culture, too, is that we’re very agile. I don’t see being ‘established’ as being old-hat – our clients continue to come to us for creativity with intelligent strategy.”

For Polly and the team, the message is very much “life begins at 40” – and they’re looking ahead to the next four decades. Sowdens now has a team of 20 – 15 full-time staff and a raft of freelancers they can call on as and when projects come up.

They’ve recently won the contract to launch Hornsea Two, the world’s largest offshore wind farm which will be completed in the next few years, and this demonstrates perfectly the need for agility, says Polly.

“We’ve needed to be able to deliver it on a short timescale, so we’ve become very good at being able to adapt to situations. Anyone who works in agency life will know that you can plan as much as possible, but the world can change the next day.”

Paul may have taken more of a back seat in recent years, but he’s still very much there as a mentor to Polly (“we’ve just had a good pep talk about this interview!” she says). “That’s the thing,” she adds, “that as a business owner, you’ve got to pick yourself up every day, come to work, be that good boss, be that good leader. And sometimes it can be lonely at the top, so I like the fact that my dad is still about.”

He also plays the key role of granddad, as one challenge for Polly has been running the company after having children just 21 months apart.

“The stereotype persists that the man works and the woman stays at home, but it’s about having good teamwork and partnership mentality at home too – my husband empowers me to break the mould and I couldn’t do any of this without his support,” she says. Maintaining a good work-life balance has been difficult at times, but this is the “reality of added value”. “We’ve been in business for 40 years because we go the extra mile, to use that cliched phrase! But it’s true. I’d love to be able to say that you can switch off at 5pm when you own your own business, but I wouldn’t be being honest.”

But challenges are not something Sowdens shy away from – far from it. They thrive on them, says Polly – and they are now in the enviable position where they can partner with clients where they feel the best synergy is.

“Because we’re in a position where decisions aren’t made just with the bottom line in mind, we can choose what we think will deliver the best results based on our experience, whereas a start-up company will probably need to get the sales and build their reputation so they can get the case studies.”

Last summer, Sowdens moved into new offices in Hessle, another slight challenge! They had purchased the 19th-century former coach house on the first day of the 2020 lockdown, and progress was delayed as they were unable to get hold of the timber and other supplies needed to renovate the place from top to bottom. But eventually they created a bespoke modern, yet historical, environment for the team to work in.

“Again, it’s about culture,” says Polly. “We could have just bought a tin box, but we invested our money into this purpose-built space that encourages people to do their best work – they want to come here every day. A business park just wouldn’t have cut it for us – we wanted something really special, and it’s all worked out really well. We’re now ready to start our next journey, and they say life begins at 40 – well, it was nice timing for bit of a rebirth.”

Because Sowdens was established in Hull and remains passionate about the city and surrounding area, there’s a perception that it is a “local firm” – which it is, but they have contracts across the UK and around the world. “We do have a lot of local clients,” says Polly, “and it was part of our business plan a decade ago that we work with a certain number of blue chips in the Hull area. Because we’ve got a long-standing reputation here, people think we just work with organisations in Hull, but in the past 12 months we’ve secured some really high-profile prestigious contracts, including the world’s number one composite decking brand, Trex, a global green energy giant, and the UK division of Japanese tech brand NEC.”

It’s been an eventful four decades, that’s for sure. Sowdens has survived four recessions, a fire that ripped through the former office in Beverley Road 21 years ago, and of course the pandemic, during which they adapted to home working overnight and won three international contracts.

Polly’s eldest son, who is five, is a “phenomenal artist”, she says – so hopes are already high that a new generation of Sowdens will continue disrupting, innovating and inventing for the next 40 years.