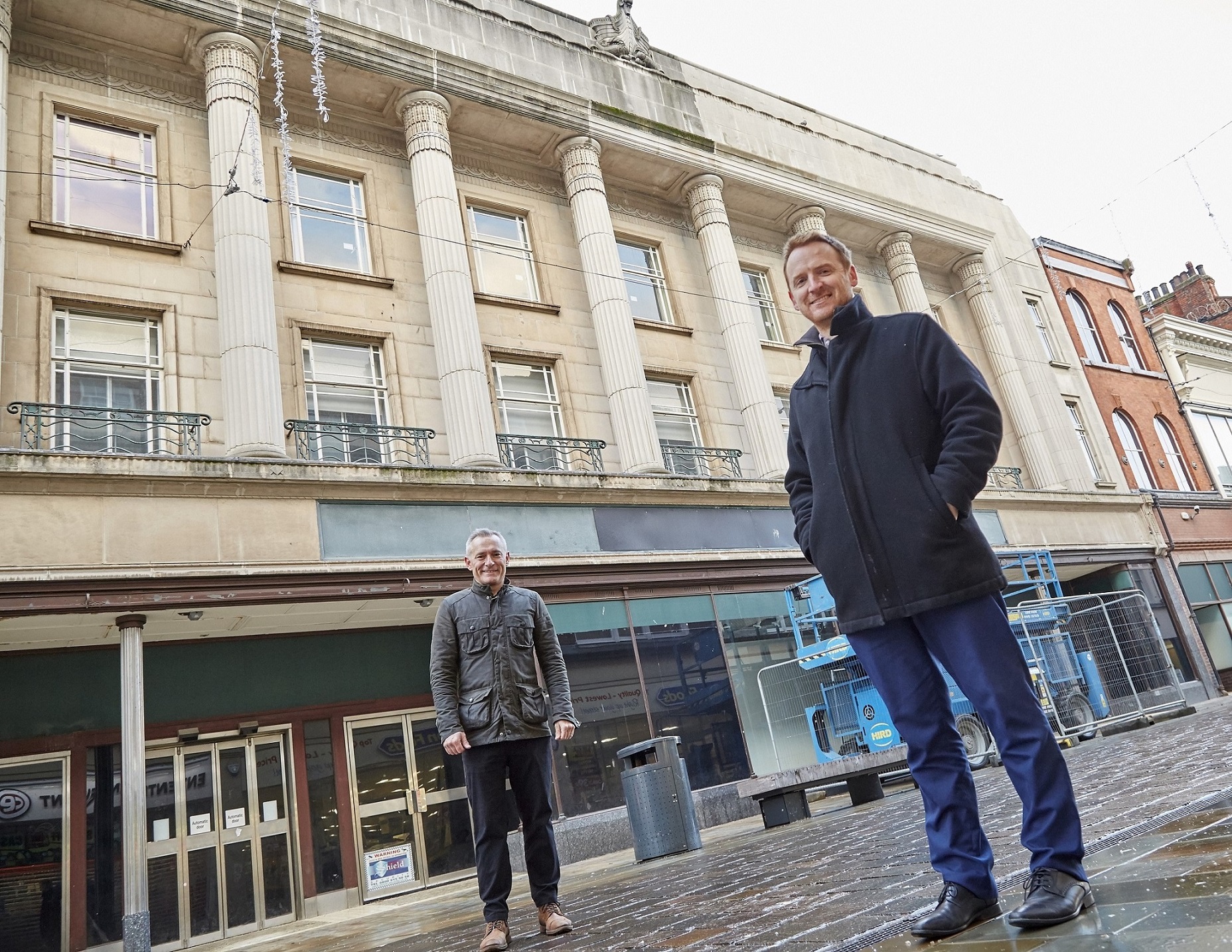 A programme of cleaning works has been carried out to smarten up landmark buildings in Hull city centre.

The frontages of the former Marks & Spencer store and the property sub-divided between HMV and the former New Look unit, in Whitefriargate, as well as the old central police station in adjoining Parliament Street, have all received a facelift.

The buildings were cleaned using a specialist chemical-free system designed specifically for conservation work that removes grime and dirt without damaging the limestone.

The cleaning, including of the pillars of the former M&S store, was carried out on behalf of developer Wykeland between 6pm and midnight over several nights to avoid disruption to the public and ensure Covid-19 social distancing guidelines could be adhered to.

Redecoration works including painting and stone repairs will also now be carried out on all three buildings.

The restoration project is consistent with Wykeland’s long-standing track record of bringing neglected commercial properties back to life, sympathetically and to the benefit of the local economy and community.

The Hull-based developer owns the freehold of the three buildings. The former M&S store and New Look unit are currently unoccupied, with Wykeland exploring options for their future use.

Tom Watson, development surveyor at Wykeland, said: “The cleaning and restoration of these historically significant buildings is a further demonstration of our commitment to the regeneration of our home city.

“These works make the buildings more visually attractive as part of our strategy to bring them back into use. They also make Whitefriargate a more appealing area and contribute to the rejuvenation of a key part of the city centre.”

Hull-based Kingston Cleaning Services were contracted by Wykeland to carry out the works and its operatives used a cleaning system that produces a high-pressure steam to quickly but gently remove grime, dirt and moss.

Sean Carrison, managing director of Kingston Cleaning Services, said: “Because of the historical significance of the buildings we used a less aggressive, softer way of cleaning that doesn’t involve any harmful products.

“It is very effective, without causing any damage to the stone, making the buildings much brighter and more attractive.”

Wykeland purchased the freehold of the former M&S store and the building incorporating HMV and the former New Look unit, which is remembered by many as the site of the old Littlewoods store, last year. The acquisitions were part of Wykeland’s ongoing commitment to investment in the city.

Wykeland is one of Yorkshire’s leading commercial property developers and is at the forefront of regeneration and investment across Hull and the Humber.

Wykeland’s flagship schemes include the expanding Melton West business park in East Yorkshire, the successful Bridgehead development close to the Humber Bridge, the @TheDock tech campus in Hull’s Fruit Market and the Flemingate centre in Beverley.

Wykeland is also part of the Wykeland Beal joint venture with housebuilder Beal Homes, which is driving forward the regeneration of the Fruit Market, in partnership with Hull City Council.