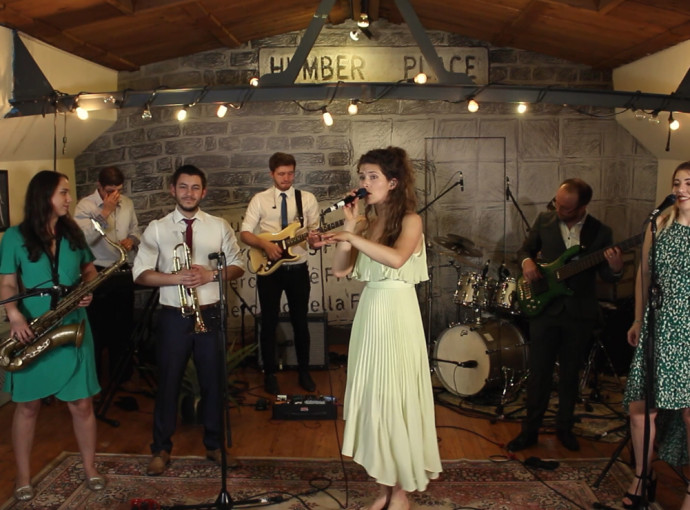 Hull-based artist Sarah Louise Davies will make the short trip from her apartment in Humber Street to Tapasya @ Marina every Friday night for the rest of this year to entertain diners at the restaurant, which is one of only two Indian eateries in the county to hold a Michelin Plate.
Accompanying the velvet-voiced singer is an array of musicians from Hull and much further afield as Sarah Louise works on plans for a full festive show featuring her nine-piece funk, soul, jazz and pop combo Play Club Music Party.
It all started with a chat over a cup of coffee and a laptop with Mukesh Tirkoti, Director of Tapasya @ Marina, and Sarah Louise hopes it will help to build a community feel around the Marina and Fruit Market as more people set up home in the area.
She said: “I love the restaurant’s peaceful ambience and I like to go in there to sit, have a drink and work. I was chatting to Mukesh and he said he wanted to put on some live music that’s a little bit different for Friday nights. Things progressed from there.”
Sarah Louise came to Hull from the south to study drama and theatre at the University, staying in the city afterwards to build her own business working in immersive and performing arts.
So far the shows at Tapasya @ Marina have just featured Sarah Louise and guitarist Sam Ayres but she’ll be inviting brass and keyboards for the December nights and bringing her full soul band for the big Christmas specials, with a repertoire stretching from Michael Jackson and Justin Timberlake to Peggy Lee and Etta James.
Sarah Louise said: “We’ll be featuring more musicians and different arrangements of classics as we go, building up the live night through the season in a chilled out environment.
“The restaurant is a perfect social and central space. The shows came about from simply being a member of the community here and I see the nights building on that to create a really unique atmosphere and bring more live creativity to the area whilst supporting a delicious local business.”
Tapasya @ Marina was named last month as the only Michelin Plate restaurant in Hull and one of only two Indian restaurants in Yorkshire to earn the accolade. It also took the Remarkable Restaurant prize in the 2019 Remarkable East Yorkshire Tourism Awards (REYTAs).
Mukesh said: “I spoke to Sarah Louise when she was in here working because I recognised her, and when she mentioned her music I asked her if she could help us bring something new to the restaurant. It’s great to find such talent on our doorstep.
“The first two shows have been excellent and we’re going to put them on every Friday until the end of December. People really enjoy the music and the laid-back style which is what Tapasya @ Marina is all about.”